The French luxury goods maker said it expects to post a record operating margin for the full year. 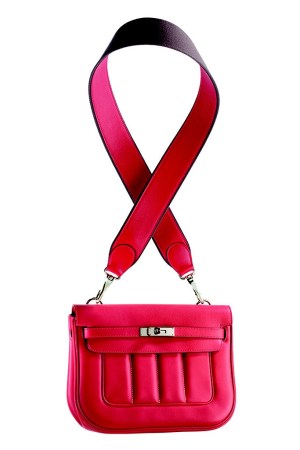 PARIS — Hermès International said Thursday it expected to post a record operating margin for 2013 after recording “dynamic” sales in the fourth quarter, despite the negative impact of exchange rates, in particular the weak Japanese yen.

This story first appeared in the February 14, 2014 issue of WWD. Subscribe Today.

The maker of Birkin bags and silk scarves said sales totaled 1.09 billion euros, or $1.49 billion, in the fourth quarter, up 4.6 percent versus 2012. This represented a rise of 11 percent at constant exchange rates.

The increase came against a particularly strong fourth quarter in 2012, when sales soared 22.5 percent in reported terms and 18.5 percent at constant exchange rates.

Hermès reported revenues for 2013 as a whole rose 7.8 percent to 3.75 billion euros, or $4.99 billion. Stripping out currency fluctuations, sales were up 13 percent, topping the company’s most recent target of consolidated annual sales growth of 11 percent to 12 percent.

The French luxury goods firm is scheduled to report full-year earnings on March 20.

“With the dynamic sales at the end of the year, the current operating margin is set to be very slightly above the all-time high achieved in 2012,” it stated, referring to last year’s record operating margin of 32.1 percent.

Patrick Albaladejo, deputy managing director in charge of strategy and image at Hermès, said the outlook for 2014 was difficult to forecast due to important calendar effects such as the Chinese New Year, which this year fell on Jan. 31 compared with Feb. 10 in 2013.

“We are neither optimistic nor pessimistic. As always, we feel very confident in the quality of the products and the collections. The bulk of our customers are impulse buyers, which means their purchases are triggered — or not — by their desire, their appetite for the collections,” he told WWD.

“Creativity therefore remains the key factor, and we maintain our expectation of long-term annual growth of 10 percent [at constant exchange rates] on average. If the creativity is up to par, we have no reason to think we won’t be able to meet this objective,” he added.

Though the quarterly rate of increase was its lowest this year, Hermès fared better than its peers in the luxury sector, which has been hit by a slowdown in spending in China.

LVMH Moët Hennessy Louis Vuitton said revenues rose 2.4 percent in the fourth quarter, while sales at Compagnie Financière Richemont climbed 2.8 percent in the three months to Dec. 31. Kering is due to publish full-year results on Feb. 21.

Albaladejo said Hermès sales in China rose 17 percent at constant exchange rates in the fourth quarter, despite a marked decline in demand for luxury timepieces such as the Arceau and Cape Cod.

“We are observing a phenomenon that is especially favorable to Hermès, which is an acceleration in the trend toward seeking out higher-quality and more discreet products,” he said.

“Like everyone else, we are feeling a slowdown linked to the government’s ongoing war against corruption, but because of this, we are slightly less affected by the anticorruption measures because our products are not very visible, so we have managed to safeguard a very positive performance in China,” Albaladejo added.

Hermès said revenues in the Asia-Pacific region, excluding Japan, were up 15.7 percent at constant exchange rates in the fourth quarter, while Japan posted a 4.7 percent increase, Europe gained 11.4 percent and the Americas advanced 8.5 percent.

Taking into account currency fluctuations, sales in Japan were down 18.3 percent during the period. Hermès will raise its prices in Japan by 10 percent on Feb. 17 to compensate for the weak yen. In 2013 as a whole, foreign exchange swings made a dent of 183 millions euros, or $243 million, in the company’s revenues.