Retailers will soon learn whether the cacophony of pre- and post-Black Friday promotions will help them achieve holiday goals.

By David Moin
with contributions from Vicki M. Young
on November 23, 2016
View Slideshow 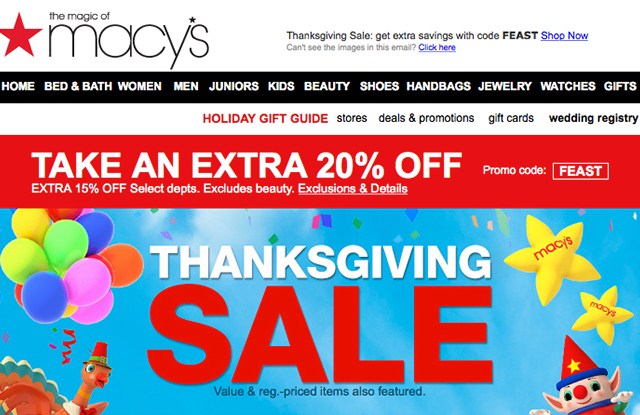 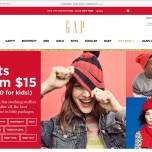 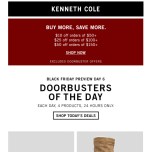 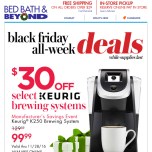 Retailers are in for another nail biter of a holiday season as it builds into one of the most promotional and extended on record.

They have inventories under control and expectations are up slightly for Thanksgiving weekend and holiday sales overall, around 3 percent, and there are 30 days between Thanksgiving and Christmas this year, versus 28 last year. Cowen & Co. research projects traffic in specialty stores nationwide to be down 3 to 5 percent during week four of November, which beats last year’s negative 9.2 percent, while the National Retail Federation estimates 137.4 million people are planning or considering shopping during Thanksgiving weekend, slightly more than the 135.8 million who came out last year.

Yet it’s those factors beyond control — the weather, post-election consumer psyche and world politics — that could trigger knee-jerk discounting and make or break the season. According to Planalytics, “cold conditions in the East will lift seasonal demand during the Black Friday weekend, while a warmer trend will blanket the rest of the country. Shoppers in the Northwest will need an umbrella, but the remainder of bargain hunters will see clear skies.”

Black Friday is still big business for retailers, but no longer the biggest day of the year, nor can it be viewed as a bellwether for the season. It’s been diminished by the proliferation of pre-Black Friday sales events, which this year started to surface right after Halloween and snowballed over the past week or so.

Black Friday business is also getting cannibalized by Thanksgiving Day store openings, Cyber Monday and shoppers still sensing that the longer they delay their gift purchases, the bigger the bargains will be, leaving the outcome largely determined by the two weeks before Christmas and week leading to New Year’s. Hanukkah starting at sunset on Dec. 24, versus Dec. 6 last year, will further delay gift shopping this year.

“Business is going to come, but it will come late,” said one senior department store executive. “We’ve got a good initial feeling about the holiday. We’re post-election. The consumer is interested in the categories we do business in and we should get a break from the weather. But the same issues exist — too much product, too much distribution, too much sameness.” Business over Thanksgiving weekend will be “OK, not spectacular,” the source said.

In the aftermath of the presidential election, there is a psychology behind the desire to shop. “There’s no question about it. Now it’s a relief for people to go out shopping and not talk about politics,” said retail analyst and blogger Walter Loeb. He sees a slight improvement in business this holiday season over last year for most stores, but not luxury purveyors.

With mall traffic and tourist spending down, a greater number of brands and retailers have been running pre-Black Friday sales this year. “The promotional bent to the business is built in. At this point, I don’t think it will have a dilutive effect on the margins,” said a retail source. “There are more people promoting. Most brands and retailers have some form of promotions, but I’m not sure it would be earlier or deeper that last year. There’s just greater variety.”

Retailers also expect to get a break from the weather, which is colder than last year. That’s likely to spur sales of coats, hats, gloves, scarves and sweaters, and from the presidential election having past. “People have had enough of it. They’re asking what can I do to make me feel better. Shopping can help,” the source said.

Loeb also noted that the cold weather should boost sales of boots, coats, jackets, scarves and gloves. “This will give retailers greater margins because this is all higher margin stuff than electronics or home,” Loeb said.

The earlier promoting has had an effect. More than half of U.S. consumers have already started making dents in their holiday gift lists, according to a survey released Nov. 21 by the National Retail Federation and Prosper Insights & Analytics.

“Consumers are looking for great prices and promotions earlier than ever, and retailers answered that demand by offering Black Friday deals as soon as the day after Halloween,” NRF president and chief executive officer Matthew Shay said.

The survey found that 55.7 percent of shoppers have already started buying holiday gifts, down slightly from the record 56.6 percent at the same time last year. Only 3 percent said they were finished shopping.

Clothing and accessories, gift cards, books, CDs, DVDs, videos and video games are among the most popular gift items being selected.

Prosper Principal Analyst Pam Goodfellow said, “The popularity of gift cards makes them an easy choice, but many consumers will still search online and in store, browse ad circulars and even login to Facebook to find inspiration for unique and memorable gifts for their loved ones.”

“Gift cards were the most asked for, apparel is the gift category most consumers plan to buy,” said an NRF spokeswoman. “We often see a difference between the two….We know that many gift-givers don’t love putting a face value on a gift, which is why they opt for apparel or other items over a gift card.”

Holiday shoppers are planning to purchase an average of three gift cards with an approximate value of $46 per card. Spending on gift cards is expected to reach $27.5 billion, up from last year’s planned $26 billion. The most popular gift cards include those from restaurants, department stores, Visa/MasterCard/American Express, coffee shops like Starbucks and entertainment.

The NRF/Prosper survey polled 7,206 consumers about holiday shopping plans and was conducted Nov. 1-8.

One of the best deals will be the $19.99 private label boots on Black Friday from J.C. Penney, marked down from original prices as high as $120 or $90 in several styles. One J.C. Penney’s exec said even at that low price, the store makes money. Beginning Nov. 21, J. Jill’s web site offered a coupon for 25 percent off at checkout. And Coach is offering a Thanksgiving sale of 30 percent off, excluding its designer collection Coach 1941.

At American Eagle Outfitters, the retailer is offering 40 percent off both in stores and online, with the online orders providing free shipping. Abercrombie & Fitch is calling its sale the “Black Friday Pregame,” with the entire store 40 percent off. And its sister brand Hollister is also offering storewide deals at 40 percent off. A spokesman for the Abercrombie and Hollister brands said they will step up communications with customers over they Black Friday weekend selling period through social media platforms, which includes its Snapchat.

Nordstrom is offering “early savings” at 40 percent off, while Macy’s sent out e-mails featuring its Thanksgiving sale ahead of the actual holiday, with 20 percent off and an extra 25 percent off clearance items, although some exclusions applied.

Lands’ End has a 30 percent off sale on its web site, but some preferred customers got the deal for 40 percent.

Not every brand is on sale. Zady, known for telling the sourcing story behind each product, still has merchandise at full price including turtleneck sweaters at $165 and wrap coats, $350. Handbag brand Hammitt is sticking to its strategy of never discounting, with handbag styles ranging from $145 to $625.

Natalie Kotlyar, a partner at BDO USA and the national retail and consumer business industry leader, said her retail and brand clients indicated that business slowed slightly at the beginning of November and picked up following the election. “Given that it is an election year, many of the promotions came out earlier,” she said, noting that some went into the season with the strategy of offering the promotions earlier to offset the softness just prior to Election Day.

While Kotlyar believes all the “promotions will eat into margins somewhat,” she also said any retailer or brand that can get the sale now means they won’t have to do a deeper discount later in the season or post holiday when the impact on margins would be more significant.

“While the holiday season no longer begins on Black Friday — some have started as early as Halloween, and some shoppers during Prime Day on Amazon — the questions for retailers and brands now are ‘When is the right time to start the promotions?’ and ‘How deep does one go?’….And while there’s no specific hot item this year to sweep the market in any category, the consumers who are buying may still be getting the same discount as last year even though the promotions [might appear] to be steeper.”

She explained that in some cases, the original price for certain items have gone up compared with last year, and a deeper discount from a higher starting point would still enable the retailer or brand to meet the same margin target as a year ago. “So the real question from the consumer’s point of view is whether the consumer is really getting a better deal with the deeper discount? Are consumers really paying the same price as they would have had the price not gone higher?”