"Vote" dresses were designed to inspire people to get out, vote and promote.

Fifty-six percent of citizens don’t cast a vote in U.S. presidential elections — and a quirky creative clan based in Los Angeles wants to change that.

“Beauty for the Vote” is a campaign coproduced by Dominika Juillet, who is the founder of Provoke, a nonprofit speaker series and film collective, with a mission to cultivate conversation and encouragement about voting, particularly for women. “It’s been 100 years since women got the right to vote, and we are still only seeing [slightly more than half] of eligible voters in the U.S. turn up to vote,” Juillet told WWD.

Juillet’s idea was to promote voting in the upcoming U.S. election through directive fashion featured on young women’s beauty and social media accounts — and that meant a female-centric photo shoot, focused on two distinctive looks: The first, a provocative (almost topless) homage to denim in the Nineties, a source of endless inspiration for Juillet, who grew up during the decade and looked up to the powerful, athletic supermodels dominating at that time; and a second image that would feature a “very fashion-driven” look.

“That was when I reached out to Maggie [Barry],” Juillet explained. “When I first came to L.A., I was on a television series, and a p.r. rep had sent me to one of Maggie’s shows. It was so vibrant, imaginative and full of statements. I reached out to Maggie just hoping we could borrow something from a past collection, but instead she came back with the inspiration to create ‘vote’ themed dresses that were Nineties tube-cut with very powerful, almost super-heroic arm bands, and a hat capturing Patrick Treacy’s influential lines.” 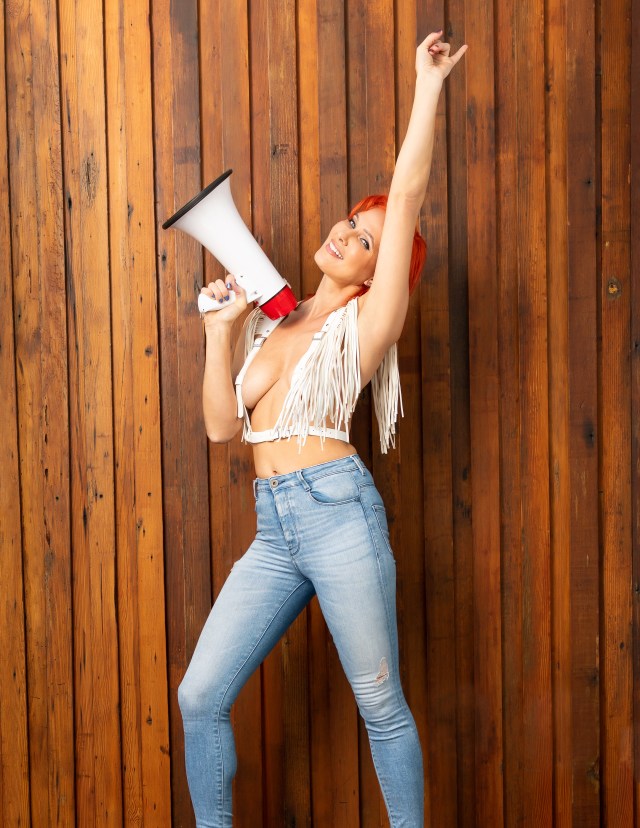 An homage to the Nineties. Photo by Monica Guitti, photographer and producer.  ©Monica Guitti

Designer Maggie Barry’s swift response stemmed from a shared feeling of urgency. “This is no time for apathy,” Barry told WWD. “Using your voice and influence to get people registered to vote is critical. [I] decided to do this shoot because we need to be inspired to get up and vote and make voting in fashion, make it the power we have to make a difference. United we can make a difference and changes that matter.” Barry had a mere six days to turn around the dress, and she delivered.

“I was floored she was willing to do this, but I understood, while talking to her, that we shared a similar feeling that we could all be doing more to cultivate conversation and encouragement about voting. We were so honored to wear her pieces,” Juillet said.

Provoke’s raison d’être is to create meaningful content at the intersection of fashion and intellectual conversation with an added dose of tangible, sartorial splendor. Perhaps Provoke’s ethos could best be characterized by its event where the firm featured a speaker that discussed how inventor Nikola Tesla’s story was encapsulated into a graphic novel, alongside a showcase of designs by Moods of Norway, which included a dress donning a paper clip print as a tribute to Johan Vaaler, the Norwegian inventor of the paper clip.

“At the opening of every Provoke event, we encourage people to approach anyone whose outfit or demeanor affected or inspired them. ‘Talk to strangers’ was a popular motto in our curated spaces,” Juillet told WWD. 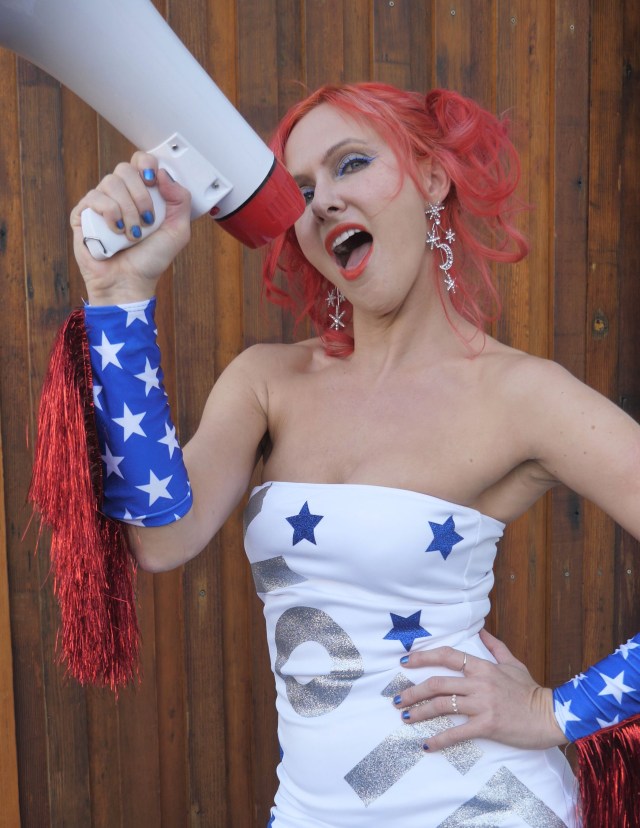 She continued, “Ever since I was a child, I have always observed that there is a philosophy, a statement that goes into how we dress and how we perceive fashion. We are a canvas; every day we wake up, we get to choose what our fashion ‘says’ about us. My mom was a huge fan of the Coco Chanel power suit, bold colors, and very artistic accents on monochrome minimalism. People were always approaching or talking to her because of what she was wearing. Whether commenting that it was bold or racy or asking why she wore it, she provoked a lot of attention simply by always being put together and standing out.”

“I understood that clothing can be very evocative and a powerful way in which to establish ambition, as well as boundaries, as a woman. I think no matter what you wear, it’s an opportunity to start a conversation.”

Juillet told WWD that Provoke was inspired by what she experienced intellectually at The Hollywood Hill, a company that hosts “world-changing” innovations in science and technology for the entertainment industry. Provoke’s events differ with the inclusion of “elements of fashion and music to create a much more sensory and visual experience.”

“Hollywood Hill was created with the help of Arianna Huffington and Lawrence Bender to provide a talking and learning space about global innovation in sciences and humanities,” Juillet explained. “We had small-scale experiences with everyone from Elon Musk to women pioneering microfinancing in Rwanda. I loved that you were expected to go there as a person in the film industry, but not to talk about yourself or your work; just to embrace what the situation could teach you about culture and the big global picture.”

And for Juillet, the big global picture currently begs for sheer, unadulterated unity, particularly before a landmark election. “In 2020, there is nothing more critical than dedicating some of that space we all have for social media to promoting something that unites us all: this election. And with a pandemic, there are challenges all around not only to making it possible to collaborate — but also finding people who can see how a PSA is time well spent.”

Editor’s note: Since the publication of this story, Kelly Pantaleoni said she coproduced the “Beauty for the Vote” campaign, but Dominika Juillet disputes that claim.