Data from Honey provides insights into how Americans are changing how they shop and showcase thriftiness.

Forty-seven percent of consumers want to see new UGC content on social media at least 2 to 3 times a week, with 10 percent of those expecting updates multiple times a day, Bazaarvoice said.

During the pandemic, 75 percent of Americans said they are actively seeking out more coupons, promo codes, and deals when they shop, according to a new study by Honey.

Honey, a PayPal service which helps consumers save money when shopping online, conducted the consumer with Atomic Research between Aug. 21 and Aug. 23, 2020, in order to gain insights into the changing consumer behavior as it relates to seeking deals, discounts and promotions while exploring the emotions and habits of online shopping amid the coronavirus pandemic.

Notably, the survey found 58 percent of respondents have experienced a decrease in household income with 79 percent of respondents saying discovering a deal is even more important than it was prior to the pandemic. According to Honey, consumers are no longer passively searching for coupons but rather savvy shoppers have adopted new behaviors for finding deals.

“Deal-seeking has become an integral part of online shopping culture and influences how we feel about the items we buy and when we buy them,” said Joanne Bradford, vice president of Honey Marketing at PayPal. “Honey was built to make deal discovery quick and simple so if a better price is available, shoppers can make smarter decisions that take their money further.” 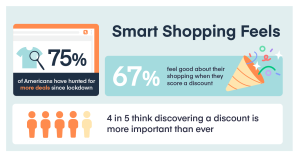 Moreover, Honey’s research found that 38 percent of American consumers experience anxiety, 22 percent feel frustrated, and another 22 percent feel guilty making a full-priced purchase during COVID-19. At the same time, 46 percent of consumers said they are willing to wait on a purchase to find a good deal.

“Guilt and anxiety when shopping has always been there,” said Dawnn Karen, a retail and fashion psychologist. “I believe it has increased due to shopping online as now we have access to see a purchased item being marketed at a lower price by another retailer. However, there are ways to avoid these feelings, and finding deals is one of them. Shopping should still retain a sense of delight.”

Being “thrifty,” Karen said, describes consumers who are cost-conscious, making intentional and mindful decisions while they shop.

According to Honey’s data, being thrifty can be very time-consuming and 37 percent of respondents said they take one to two hours a week looking for coupons. Another 20 percent said they spend between three to four hours searching per week. 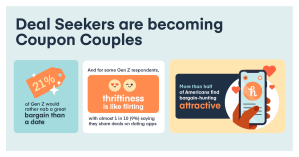 “There is a spike in the attractiveness of someone who is thrifty because people want security,” said Karen. “Security in a COVID-19 world, which is full of uncertainty, creates a spark and a bond between potential partners; as if to say if we can save we will have the means to overcome any challenges that come our way.” 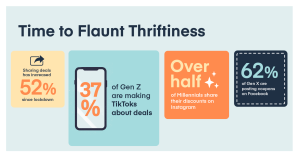 “Shopping during COVID-19 is inevitable,” said Karen. “[This] report shows now more than ever consumers are looking to make smart, informed buying decisions.”