From Manhattan town houses to Beverly Hills manses to West Texas ranches, these executives are living it up.

While a hefty part of many executives’ pay packages comes in stock options they have to patiently wait to vest, in most cases enough hard cash gets to their bank accounts to ensure they live in a comfortable — and sometimes opulent — fashion.

Take Hal Lawton. When he joined Macy’s in 2017 as its new president, he moved his family from San Francisco, where he worked for eBay, to a town house in Manhattan’s West Village neighborhood that was once owned by Hollywood A-lister Hilary Swank.

His $5.5 million joining bonus from the department store chain no doubt helped with the down payment for the $10.5 million abode.

It was a similar case for Walmart’s Marc Lore. While building Jet.com into a force to be reckoned with, he lived in a modest four-bedroom house in a quiet New Jersey suburb.

However, not long after selling Jet to Walmart and joining the retail giant as president and chief executive officer of U.S. e-commerce, he sold that home for just under $900,000 and upgraded to a TriBeCa penthouse that cost an eye-watering $44 million.

There, he shares elevator rides with Hollywood heavyweights like Blake Lively and Ryan Reynolds, Jessica Biel and Justin Timberlake, Jake Gyllenhaal and Rebel Wilson, who also have homes in the uber-exclusive condominium. 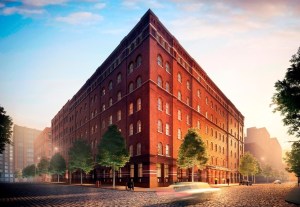 Taking it even further is Amazon’s Jeff Bezos, whose spate of property purchases over the years have made him the country’s 28th largest landowner in the U.S., with 420,000 acres, according to The Land Report.

This includes 300,000 acres in West Texas, several properties in the Seattle area where Amazon is headquartered, two side-by-side L.A. manses and a former textile museum in Washington, D.C. It’s not known, though, who kept what after he and his ex-wife, MacKenzie Bezos, finalized their divorce this month.

Post-split, Bezos kept amassing properties and is reported to have spent $80 million on three units in an exclusive condominium on Manhattan’s Fifth Avenue with plans to turn them into a mega-residence. Once completed, the manse-in-the-sky could be worth much more. 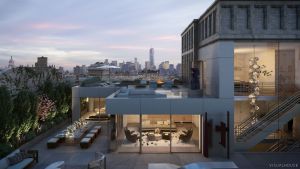 And when he’s fed up of land, he has the option of taking to his private jet and one day maybe his spaceship.

Then there is number three on the list, Ralph Lauren, who owns a Manhattan apartment, but also famously has a Hamptons beach house, a retreat in Jamaica, a ranch in Telluride and a mansion in Bedford, N.Y.

Lauren offered a glimpse at his lifestyle when he chauffeured the fashion crowd to Bedford to view his fall 2018 fashion collection amid his world-class vintage car collection.

However, they were only shown the garage and sadly didn’t get a peek of the stone manor house that he and his wife Ricky call home, which is impressive to say the least and was featured in a glossy 2004 spread in Architectural Digest.

Surrounded by over 250 acres of land and built in 1919, the 17,000-square-foot property includes a mahogany-paneled library; an English drawing room; a five-room, private master suite, and a state-of-the-art dressing room. 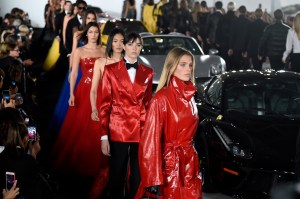 Jonathan Miller, president and chief executive officer of appraisal firm Miller Samuel, said: “For consumers at this level, it’s all about security, privacy and buying or getting something that no one else has — something that’s unique as opposed to one unit in a line of five others like it. I think there’s a hunger for assets that stand out or are different.”

Leonard Steinberg, a broker at Compass, who just helped Theory’s Andrew Rosen sell his TriBeCa penthouse for $18.5 million, added that one of the biggest challenges for fashion executives on the real estate hunt is to find something unique and special.

“Let’s put it this way — fashion people for the most part prefer wearing and living in couture rather than ready-to-wear, so I think the homes that they live in are definitely more on the couture side rather than the ready-to-wear side,” he told WWD.