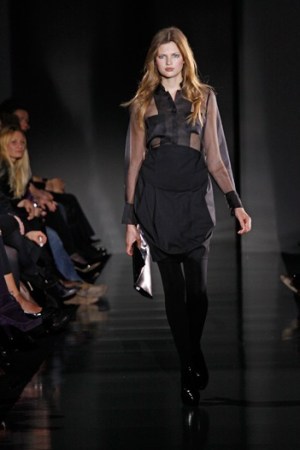 BERLIN — The days of consistent double-digit gains in the fashion industry may be over, but Hugo Boss chief executive officer Claus-Dietrich Lahrs nonetheless sees multiple growth opportunities for the German fashion giant.

The company’s ceo since last August, Lahrs is confident Hugo Boss can weather the economic turbulence. “The crisis is a very real one for 2009 and maybe the beginning of 2010,” he noted. “But Hugo Boss is able to face it with a positive attitude.”

His comments came as Hugo Boss reported losses for both the fourth quarter and full year of 2008 as a result of writedowns and restructuring costs (see sidebar).

Among the initiatives Lahrs plans are:

• More company-owned retail in markets worldwide, including the U.S.

The future, as Lahrs sees it, will be more international and individually brand-driven for Boss than ever before. One of the key tasks, he said, is “to bring the immense, worldwide awareness of the brand in line with our worldwide sales structure.” Today, Boss does 70 percent of its business in Europe and 30 percent outside, a ratio Lahrs believes must change.

“Our business needs to be stronger in very important areas outside Europe. We urgently need to develop business stronger than it is even today in the Americas, as well as Asia, India and Japan,” he said. Besides giving area managers, such as the Americas’ new Boss chief Mark Braschier more control, it also will require a stronger emphasis on company-owned retail.

“Whenever you go outside Europe, the future business depends on retail — and often your own retail,” said Lahrs. “We have a strong franchise with our very important department store partners in the U.S. and that will remain important. But if we want to grow faster than our competitors, and even faster than we have in the past, we need to invest into controlling our own stores. And that’s an expertise we want to develop — not only in headquarters but in each market.”

Brand individualization is the second pivotal point for Boss going forward. Heading the Boss group’s brand roster is Boss Black, the universe of which is well-defined. But that doesn’t rule out change.

“We will invest in women’s in a major way. It’s amazing how successful Boss has become in the women’s world, and we need to maintain that strength,” Lahrs declared. Boss got into women’s wear via Hugo in 1998. Hugo Boss women’s wear was launched in 2000 and, despite a rocky start, women’s has grown to 13 percent of group sales in less than a decade, and its share continues to rise.

The goal now is to strengthen the “feminine” component in the Boss Black women’s line.

Germany is the leading market for Boss Black women’s wear, followed by France, and the U.S. is showing “very promising results,” he added. “But we can conquer additional European markets and Asia is largely untapped.”

As for Boss Black men’s wear, even in mature markets like Germany, where Boss has an over 25 percent market share in the premium segment, Lahrs still sees “territory to gain. In Western Europe, if you want to grow you need to take part of your competitor’s business. And we are far from doing it.”

He’s convinced the collection’s established strong points can help it gain ground, from the modern silhouette to the line’s strong delivery and sell-through performance. “Especially in moments like today, that’s one of the most important criteria of choice for our key trading partners,” Lahrs said. “So we’ll play on these strengths even more than in the past. I’m confident this brand is still far from reaching its potential in the medium term.”

The most avant-garde contender in the Boss Group — Hugo — will remain just so. “We have a very, very strong talent with Bruno Pieters, and we’re committed to keeping this brand relevant and design driven. And we will build it for men and for women,” he stated.

To underscore that point, Boss made its Paris premiere with Hugo, which opened the men’s collections there in January. Safe it wasn’t — much to Lahrs’ satisfaction. “It was bold and courageous, not only in terms of the collection but from the conceptual point of view down to the location. Hugo may be a smaller beast, but it’s important. It gives the entire Hugo Boss universe a very nice edge.”

Boss Green will remain sportive and functional in orientation, and a men’s only range. Lahrs sees development potential in golf, technologically driven sports apparel and even ski wear.

Boss Orange, on the other hand, is a work in progress. What Lahrs characterizes as the “more rough, unpolished side of Hugo Boss” is to be completely relaunched and newly positioned in June. “The collection will be clearer and more understandable,” he said, with former Hugo creative director Eyan Allan now in charge.

Also in the wings: Boss Kidswear. As announced earlier this month, Boss has entered into a licensing agreement with the French children’s wear company C.W.F. Children Worldwide Fashion SAS. The collection for girls and boys aged 0-16 will include shoes and textile accessories in addition to apparel. It is set to premiere for spring 2010.

In an important restructuring move, there is now one senior vice president in charge of each Boss label “who will decide about the destiny of the brand. Before we had a dual structure with creative directors and brand directors competing,” Lahrs explained. “But if you want to run a brand, you need to have an opinion about what your brand is, where the competition stands and what the customer is about. For that reason, we created a structure to make decision making easier, as well as proximity to market, and the ability to put forward more courageous and risk-taking decisions.

Despite a weakening world market, Lahrs is far from pessimistic. While he said expectations to constantly deliver double-digit growth are unrealistic, growth is nonetheless central to the fashion industry. “Our industry is about growth. If you don’t grow, if you stand still, you lose,” he said. “And of all industries, fashion and accessories are markets where double-digit gains are possible, as small phenomena can become relevant fast.

“But especially at our size,” he continued, “it’s important to make sure we not only grow strong, but that we stabilize that growth over time.

“Our business model is a very viable one,” he added. “Yes, we are making pretty important changes in terms of how we want to brand, position those brands and get closer to markets outside Europe. But that won’t alter a very existing, successful business concept which is the one Hugo Boss has been running for more than 20 years.”