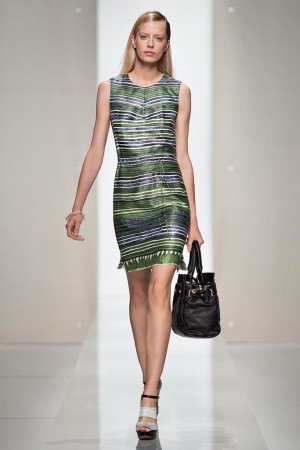 Chief executive officer Claus-Dietrich Lahrs attributed the group’s growth to its faster and more profitable than expected transition from a traditional wholesale company with some joint retail activity to a major retail player with continued wholesale operations.

“If you ask why we’re upgrading our initial growth plan, retail is the most important reason,” Lahrs said in an exclusive interview prior to presenting the group’s strategy to analysts here Tuesday. “The key growth drivers are all linked to more retail.…Having more retail in areas where you don’t have wholesale, developing more profitable and sustainable retail in mature markets, learning how to develop collections which are closer to the needs of the final consumer, and adjusting our entire organizational set up to this new behavior have played into our performing better than originally planned.”

He emphasized that the group’s strategic plan for 2015 hasn’t changed in terms of its key elements or pillars. “It’s just that we’re making faster progress with those key drivers,” he stated. These remain retail expansion; strengthening the individual Boss brand identities; exploiting growth potential, especially in Asia and the Americas, and further improving and speeding up operational processes.

In 2015, retail is expected account for about 55 percent of group sales, compared to about 40 percent now, but is expected to contribute more than 70 percent of medium-term growth. “Three years back, the breakdown was roughly one-third retail, two-thirds wholesale, but it could be the other way around by 2015,” Lahrs said.

In terms of doors, the group is planning to open about 50 additional stores yearly. As of Sept. 30, Boss had a total of 219 directly operated freestanding stores: 110 in Europe, 26 in the Americas and 83 in Asia, plus 290 shop-in-shops worldwide. Next up in 2012: 20 new doors in Asia, the remaining 30 in Europe and the Americas.

Lahrs noted Boss already covers most of the largest U.S. cities with its own stores, “so if we add additional U.S. doors, if will be more in the middle of the country. But we have to see how these markets perform. We are currently seeing a very strong shift in demographics into the continued successful states, where economic activity remains strong regardless of the overall situation. And it’s the same in Europe.”

The continued takeover of franchise stores, as with Rainbow and Imaginex in China, and Moss Bros. in the U.K., is also part of the retail strategy and talks are in progress in Taiwan and China. The group is also moving to take over shop-in-shops operated by wholesale partners or taking a more decisive role in these doors via brand management and staff training. As for e-commerce, Boss projects online will become a 150 million euro, or $206.4 million, business by 2015.

One of the men’s premium market leaders, Boss is now sharpening its luxury profile and giving Boss Selection an extra push, thanks to growing demand in China as well as stepped-up interest in Europe and key American markets. Lahrs pointed to Selection’s new luxury sportswear component, and a complete shoe and accessories line has been added. Selection now generates “well over 50 million euros” and sales are expected to hit the 100 million euro, or $137.6 million, mark by 2015.

Women’s wear is a smaller piece of the Boss pie but it is outpacing men’s in its rate of growth. Lahrs said the group thinks it can more than double net women’s wear sales, which currently exceed 200 million euros, or $275.2 million. At the same time, he stressed Boss remains committed to defending its market leadership in premium men’s wear.

“We see opportunities even in mature markets like Germany, where we continue to increase our market share in suits and dress furnishings against the competition,” the ceo stated. He also foresees further consolidation in the men’s wear sector worldwide, especially in clothing and dress furnishings. “The number of relevant brands in the premium and luxury segment are going to decrease,” he said.

Geographically, Asia — and China in particular — remains the fastest growing region, and sales there are expected to almost triple by 2015 compared with 2010. Considerable growth is also predicted for the Americas, and praising Boss Americas chairman and ceo Mark Brashear and his team, Lahrs remains upbeat about the brand’s performance and outlook in the U.S. “The high end is coming back. That I can say.”

He acknowledged that the current economic climate poses challenges, but even in the midst of Eurozone crises and political debate, Boss is still finding it can grow market share. “Take Spain,” he said. “We’re growing our business there by 30 percent and it’s a country with 20 percent adult unemployment and 40 percent youth unemployment.”

Hugo Boss common stock closed up 4.9 percent at 66 euros, or $91.03, Tuesday on Xetra, the electronic trading platform of the Deutsche Boerse Group. Preferred shares closed at 72.11 euros, or $99.45, gaining 8.5 percent. All dollar figures are converted from the euro at current exchange.

Lahrs said Boss is prepared for “a softer trading environment in 2012,” especially when up against very strong results in the first nine months of 2011. “But Boss has proven it can go through difficult times without suffering as much as others and also that it can recover faster,” he said. “That is the basis of our realistic optimism for the years to come.”