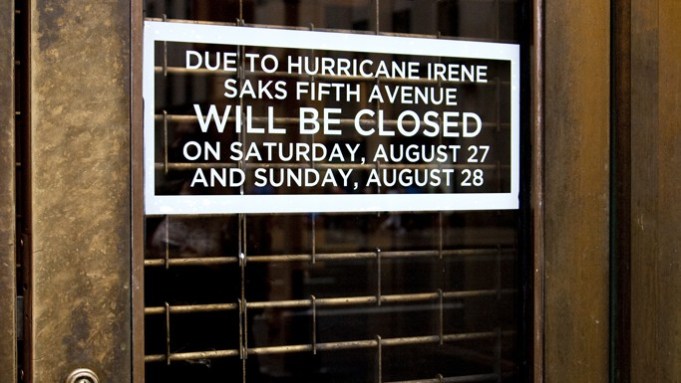 Hurricane Irene will go down in history.

While the Texas-size tropical storm system caused less property damage than originally feared, Irene still brought never-before-seen chaos up and down the Eastern Seaboard over the weekend with mass evacuations, unprecedented transport shutdowns in major cities and the closure of stores, malls, theaters and restaurants from North Carolina through to New England.

Major shopping thoroughfares in Manhattan, such as Fifth, Madison and Lexington Avenues were ghost towns, with the windows of Saks Fifth Avenue, Bergdorf Goodman, Gap and others boarded up against the arriving storm.

At least 11 people died as a result of the storm, and flooding was widespread throughout New Jersey, New York City, Long Island and surrounding areas.

While most major New York stores said they expect to reopen as normal Monday, further disruption is likely as airports, subways and commuter rail systems in cities such as New York and Washington, D.C., and into New England assess the damage and attempt to return to normal schedules. New York Mayor Michael Bloomberg has already warned that commuter rail systems might not be back to normal working until this afternoon at the earliest.

The scale of property damage will take days to calculate, but the hurricane resulted in millions of dollars in lost business at retail in the next-to-last weekend of the critical back-to-school shopping season. Peter Morici, professor at the Smith School of Business at the University of Maryland, estimated about $20 billion in direct damage plus another $20 billion to $25 billion in associated losses. Weather research specialist Planalytics estimated that the storm would translate to the loss of 80 million shoppers for retailers over what would normally have been a busy weekend.

While most stores escaped the storm relatively unscathed in terms of physical damage, the Berkeley Mall in Goldsboro, N.C., and its Belk anchor will be closed until further notice as a result of significant damage.

“A gust of wind came through, and it pushed a wall, which collapsed and then caused a ceiling to collapse, which also took out a water line,” a spokeswoman for Charlotte, N.C.-based Belk Inc. said. “They evacuated the store and the mall.”

No other serious damage was reported by the company, which operates 303 stores in 16 Southeastern states, but more than a dozen Belk stores were closed throughout the weekend because of a number of factors, including curfews imposed by city officials and power outages. “A lot of those stores are not reopening today, just because they don’t have power,” the spokeswoman said. “Our biggest mandate yesterday and still today is safety. We don’t want to put our associates at risk. If they can’t get to a store, or it is not a safe environment to get to a store, we don’t open. I don’t think a great number was impacted beyond the core group [of about a dozen stores].”

“Decisions on individual store closings continue to be made based on local weather conditions, power outages, flooding and staffing considerations,” said Jim Sluzewski, spokesman for Macy’s. Saks Inc. reported no major damage to its store fleet, but said that nine locations, including the New York flagship on Fifth Avenue, were closed on Sunday. In addition to its store at the Bergen Mall, which ordinarily closes on Sundays anyway, full-line closures were scheduled for Boston; Bala Cynwyd, Penn.; the Walt Whitman mall on Long Island; Stamford and Greenwich, Conn., and Short Hills, N.J. Its store in Richmond, Va., remained closed and without power. Barneys New York closed its flagship and other Manhattan stores for the weekend, but the firm tried to pick up some of the business lost to the storm by suggesting that shoppers “Brave the Windy Weekend in Style,” directing them to “Storm Weather Musts” in e-mails and on its Web site.

Some local merchants and stores in popular tourist destinations, such as Times Square and the Time Warner Center, were able to keep their doors open prior to the storm even as they made preparations for it.

A spokesman for Target Corp. said its stores and distribution centers “have sustained no major damage. Now we are moving from focusing on store closures to store reopenings.”

More than 100 of Target’s 1,762 units were closed during the height of the storm on Saturday, but that number fell “just below 100” on Sunday. Safety concerns, road closures, local evacuations and power outages all figured into the decisions to close stores.

“Our team all across the east coast is working to open stores as quickly and safely as possible,” he said.

Bill Knarre, vice president of regional management at The Taubman Co., said, “Fortunately, we have no damage to report across all properties, minus one or two parking-lot trees that came down in Short Hills, N.J.”

Short Hills was closed on Sunday, as were Taubman’s other New Jersey mall and its two Connecticut properties. “We expect them to open [Monday] on time,” he said.

Power is still out in its two properties in Richmond, Va., which remain closed, but the MacArthur Center in Norfolk, Va., reopened as scheduled on Sunday.

Simon Property Group said that it expected 24 of its centers on the Eastern Seaboard to be closed Sunday, including six in the New York area.

“The damage to the properties was light — debris in the parking lots or minor leaks — but that was it,” a spokesman said. “There were no reports of significant damage to our properties.” The Fashion Centre at Pentagon City in Arlington, Va., which has Macy’s and Nordstrom as anchors, was open for business Sunday, as were many of Simon’s Middle Atlantic properties.

“For the most part, the closings were in the New York metro area, with some in New England. “In the Middle Atlantic, it seemed to be business as usual today.”

Tysons Corner Center in McLean, Va., a property of The Macerich Co. with more than 300 retail tenants, was open for business and “did very well,” according to Elizabeth Natwick, senior marketing manager. Some stores, including Bloomingdale’s and Lord & Taylor, closed early on Saturday but were ready for business on Sunday. Saturday’s foot traffic was about 20 percent lighter than normal.

As for the impact on back-to-school sales, Natwick said that while she has not heard feedback from retailers, the positive news for stores is that the Fairfax Country school system does not begin until after Labor Day.

“You’ve got a lot of people that haven’t been able to do their shopping,” she noted, adding that there would “probably” be a pickup in business in the hurricane’s wake.

“Believe it or not, a lot of folks that lose power find the mall a safe haven and head over to it,” Natwick said.

The question now is how quickly the affected regions can ease flooding, remove downed trees and repair power lines to begin to get things back to normal.

“It’s still raining, there are downed trees all over the place, there are 300,000 people without power in Connecticut and the New Haven line is without power,” a New York Metropolitan Transport Authority spokeswoman said. “We are beginning to get reports of what has been affected.”

Bus service is expected to return most immediately, with the problems on the Metro-North line serving Connecticut and New York’s northern suburbs facing the greatest recovery, according to MTA chief executive officer Jay Walder.

By the afternoon, Connecticut Gov. Dannel Malloy’s office had lifted the number of powerless in his state to 600,000, while New York’s estimate, originally 370,000, was lifted to 905,000. In New Jersey, Gov. Chris Christie said the damage wasn’t as a severe as initially suspected but that there had been two fatalities and more than 500,000 without power.

Overall, however, there was a sense that as bad as things were, the fears of major damage were not realized.

Eric Beder, managing director of equity research at Brean Murray, Carret & Co., was among millions adopting an attitude of “it could have been worse.”

“Irene will have a relatively small impact on [same-store sales] for August, which ended on Saturday,” he said. “For the back-to-school season, it will be a slight negative. The damage was a lot less than was expected, especially in the Northeast.

“We dodged a potentially significant bullet,” he concluded.