In its latest “insights report” on Generation Z, Irregular Labs aims to offer a deeper understanding of the demographic’s mind-set by presenting the theme of “fluidity” and how it is shaping consumer behavior.

“The world is entering a period where borders, boundaries and binaries (gender and beyond) are dissolving rapidly,” researchers at Irregular Labs said. “Fluidity is a product of, and response to, that reality. One in which the rules and structures of old no longer apply.”

Other fundamentals of fluidity include decentralization, a focus on creativity, fragmentation, impermanence, ephemerality and activism. Gen Zers are “constantly negotiating” and interacting with one another and the world, and connections are essential. Seventy-nine percent of Gen Z “say empathy is an important quality for success.” And when it comes to jobs, work-life balance is a top priority. 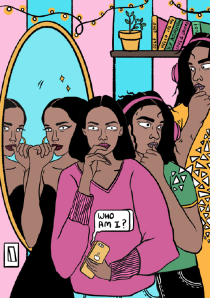 For fashion, top preferences include “Bodice (India), Charles Jeffrey (U.K.), Matty Bovan (U.K.), Pyer Moss (U.S.), Telfar (U.S.),” which the researchers described as the “new guard of designers who look nothing like their predecessors.”

“This group is properly moving into the mainstream and barely resembles fashion’s previous generations,” authors of the report said. “They just so happen to be fluid in the way they produce (sustainably), what they address (political, social and cultural issues) and for whom they design. It may be time for the people pulling the strings at established fashion houses to put these designers on speed dial.”

Irregular Labs is a think tank and research firm that convenes Gen Zers as a way to garner insights on their behavior, cultural preferences and opinions. The reports are created with content by Gen Zers, who are aged 13 to 24. The latest issue is more than 850 pages — and includes essays, data, lists, videos and case studies, “straight from the mouths and minds of Gen Z.”

“Fluidity digs into and dissects all things fluid: the what and why as well as the how — how it will impact critical systems like culture and creativity, economics, education, gender and politics,” researchers said.

Co-editor in chief Molly Logan said “we categorically believe fluidity is the key to understanding not only Gen Z, but also the future. Fluid-thinking represents a spectacular shift in how we envision ourselves and our place in the world — a movement in thought and behavior being led by Gen Z.”

The report includes a list of the top 75 “people, brands, experiences and networks” as well as op-eds on social media and activism. Fashion brands cited include Gucci, Balenciaga, Off White and Calvin Klein. “My generation’s fluidity has already influenced current systems and will continue to in the future,” said coeditor in chief Nicolaia Rips. “We approach everything ready to disrupt, in order to fit our shifting forms — we seek community, we seek rebalance, we seek change.”

There are also short quotes and vignettes throughout the report that spotlight the perspectives of Generation Z. “I’m a whasian (half Korean, half white) who believes strongly in the importance of getting out of comfort zones, embracing new cultures and seeing all sides to every story. I’m an extroverted introvert so I thrive alone but taking leadership roles is no problem for me when it’s for something I’m really passionate about,” said Davida, 17 and from Virginia.

The impetus behind the theme of “fluidity” came about based on the struggles of an Irregular Labs client. Logan, who is not a Gen Zer, said in the editor’s note that the company was meeting with a client “who was extremely frustrated by Gen Z, finding this generation confusing and contradictory.”

“This, in turn, confused us as we had no idea what she was talking about,” Logan explained. “And then it clicked: She thinks in binaries — black and white, right and wrong, male and female. But Gen Zs are fluid thinkers — they occupy a world that is multivarious and slippery, one without contradictions. In that moment, witnessing the collision of non-fluid and fluid thinking, it was clear that this generation would continue to baffle and blindside our client until she fully grasped what sits at their core, the thing driving every behavior and action — fluidity.”