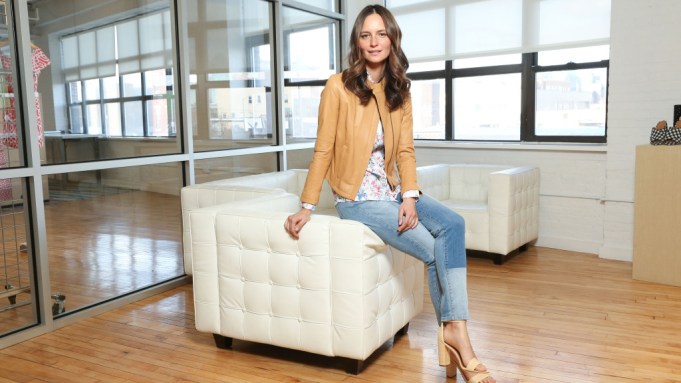 At J.McLaughlin, the days of selling heavy tweeds are over.

It’s a sign that a brand with humble origins is picking up the pace of change and thinking differently. “We have a multiprong strategy to engage new customers and reinvigorate business with existing customers,” said Mary Ellen Coyne, chief executive officer of J.McLaughlin.

“A lot of people know the brand. They just don’t know it’s for them,” added Kevin McLaughlin, cofounder and creative director of the brand.

J.McLaughlin was started 40 years ago by Brooklyn-born brothers Kevin and Jay McLaughlin with a store on 74th Street and Third Avenue in Manhattan and a classic, Northeastern country club image. Jay departed from the business about three years ago, is involved in real estate, owns with his brother the Island restaurant on the upper East Side of Manhattan, and on his own, he owns the Citron and Station 49 restaurants in Vero Beach, Fla.

No longer a family affair, J.McLaughlin, owned by the Brentwood Associates private equity firm since November 2015, has recruited experienced managers to accelerate growth across all channels, and possibly take the company public one day.

Coyne, who became ceo in July 2016 after working 19 years at Ralph Lauren, lastly as chief merchandising officer of the Polo Ralph Lauren women’s and children’s divisions, oversees McLaughlin’s overall strategy, including operations, merchandising, product development, marketing, brand development, retail and e-commerce growth. In January 2017, she brought in J.McLaughlin’s first chief merchant, Glynis Karp, and together they’re bringing disciplines to the business in such areas as merchandising, planning and allocation, something that Kevin half-jokingly conceded was “above his pay grade.”

“Jay, Steve and I were great at managing the business from 0 to $100 million,” said McLaughlin, referring to Steven Siegler, the former president. “We were resourceful and entrepreneurial. Then we needed the right person to help take us to the next level. Mary Ellen joined 18 months ago with great operational and merchandising expertise and discipline to position us for the next chapter.”

A meticulous approach to displaying merchandise has become evident, so for example, aside the cardigans, there could be coordinating scarves on one side and pants on the other, creating the aura of a cohesive collection, rather than a melange of items, and encouraging customers to put together outfits. “Every sku has its place,” said Coyne.

The J.McLaughlin collection is evolving, with the addition of contemporary styles such as distressed jeans and short, fitted leather jackets and ruffled sleeves for spring, to complement the classic corduroys, Bermudas, paisleys and bright “sunshiny” resort dresses, among the timeless styles and updated classics the brand specializes in.

“I like to say that it’s our job to take a customer of a certain sensibility and lifestyle as close to fashion as she wants to go without taking her over the edge,” said McLaughlin. “We nod to fashion. We don’t bow.” The McLaughlin look is sometimes referred to as “edgy prep” while Coyne characterized it as “classic American sportswear with relevance.”

There’s been a “narrowing” of the stockkeeping units to make the stores easier to shop, and strengthen the focus on the best-selling items. Printed coats have made a comeback and seasonless lighter weights with enough heft to wear through winter and spring have been added. As McLaughlin pointed out, “We used to sell tons of tweed, but everything is getting lighter and lighter. We do have a tweedy look that’s urban appropriate, good for city dressing, and good for going out of town. It’s a blend with the look and texture of tweed, but not as heavy.” Among J.McLaughlin’s perennial best-sellers are the Lexi five-pocket pants in solids and prints that look woven but are actually a knit, as well as the Catalina T-shirts, and cardigans in an array of colors and prints.

Inspiration for the collection each season begins with a theme and a print, McLaughlin explained. He is often inspired by his travels as well as vintage wallpaper, colorful tiles and architectural elements that he and his design team morph into J.McLaughlin’s “It” print for the season. One for the future might be inspired by patchwork created by the Seminoles in Florida. Last season, McLaughlin was inspired by the artist Orville Bowman, known for his Florida landscapes. “He’s rather joyful and colorful,” said McLaughlin.

While J.McLaughlin has always been recognized for its bright colors and prints, “The question is, how do you keep it fresh?” McLaughlin said, laying out the challenge.

Taking some contemporary turns suggests the company is skewing to a younger clientele, though Coyne said that’s not the case. “We’re keeping it at 54. But that’s a blended number. It’s very deceiving. We’ve got customers that range in age from 24 to 84. We are a multigenerational brand.”

On a mid-January day, Coyne and McLaughlin are seated inside the company’s 40,000-square-foot headquarters/factory in the Greenpoint section of Brooklyn, where there are 100 corporate employees involved in shipping, product development, design, planning, merchandising, marketing, the photo studio, the print library, a fabric warehouse, IT and distribution. J.McLaughin has 600 employees in total, including the store workers.

About 25 percent of the company’s volume — around $100 million last year — is produced in the factory, down from 40 percent a few years ago, as the business grows and product is increasingly produced in Asia and Europe. “The team is so small so we can be incredibly nimble and very entrepreneurial,” said McLaughlin. “Things move fast here. We say we’re scrappy. We can make a sample in a day, if I like the fabric, and get in on the selling floor in four weeks.”

Her underlying message is that for a brand that’s been around for four decades, it’s time to seriously tap its potential and accelerate growth. Brentwood Associates has mentioned the possibility of taking the brand public or they could sell it privately. In terms of getting involved in the business, “They are more proactive than most private equity firms,” Coyne said.

She cites several growth maneuvers over the past year and a half, including the launch of catalogues and introduction of sunglasses and women’s swimwear to the assortment, and this year launching women’s shoes for resort and kids for spring. The company has also been picking up the rate of store openings, and advanced its philanthropic efforts, which have tended to be very local, with a statewide campaign in Florida to support the preservation of the Everglades. Last month, a limited-edition cashmere collection was launched to support the Everglades Foundation. Twenty percent of the sweater proceeds benefit the Everglades Foundation.

The catalogue strategy seems counterintuitive with the growth of e-commerce and the high costs of printing and mailing. But according to Coyne, “The books are very productive — sales per book and response rate per book are very high. Partly as a result of the introduction of catalogues, e-commerce has doubled over the last two years. They tell the story of who we are. Roughly 70 percent of those who receive a catalogue end up going into our stores.”

The catalogues convey J.McLaughlin’s fashion stories better than the stores, which are small, at 1,000 square feet on average, and generally with just four mannequins displayed. The catalogues also serve as a vehicle for prospecting new customers. The catalogues have 165,000 loyal customers. Eight editions are distributed annually, and last year, five million homes received them.

The company has a restrained approach to creating the catalogues. “We shoot where the stores are,” McLaughin said. Like Vero Beach, Fla., for a holiday-resort book, where one of the chain’s top three volume stores is located, or inside McLaughlin’s home on 65th Street in Manhattan where a holiday catalogue was photographed. “We are trying to be as human and approachable as possible. Not  something overly aspirational. It’s unrealistic,” McLaughlin said.

Another mark of distinction is the pricing. It’s not nearly as promotional as other fashion retailers. The company recently shifted to three sales a year, in January, June and August, from previously having 20 percent of the business always on sale. Asked how J.McLaughlin manages to maintain a full-price posture, McLaughlin replied, “You have to have very fair pricing that the customer thinks is a value, put it in a beautiful setting and treat customers really nicely and they’ll pay.”

The company operates 129 stores around the country. The McLaughlin brothers always chose locations selectively, opting for Main Streets and resort communities and keeping the stores small and modest in character. Eight years ago, a 5,500-square-foot format in Westport, Conn. was tested. It presented challenges to broaden the selection and after a few years closed.

“Very seldom do we do a downtown location,” said McLaughlin. Only two stores are in malls, in Palm Beach Gardens, Fla. and Edina, Minneapolis. This April, a third mall store is opening in the Somerset Collection luxury shopping center, in Troy, Mich., but malls are mostly avoided.

Regarding expansion, “The plan is for 10 to 20 openings annually,” said Coyne. “We have six committed to open in the first half of the year. We are expecting to find another six in the second half. Seventeen stores opened last year.”

“I would like to see something happen in Seattle. The Pacific Northwest is virgin territory,” said McLaughlin. “In Colorado, there’s  just one store, and basically, west of the Mississippi, there’s very little presence of stores, except for California where there are 10 and where five opened last year.

It’s a relatively small national chain that while growing, strives to maintain its neighborhoody, quaint character, and never gets cookie-cutter. “We use a residential architect so the spirit of our stores is warm and welcoming,” said Coyne.

“All the stores are designed differently,” said McLaughlin. “No two stores are alike, but you always know you are in a J.McLaughlin store.”