Javad Marandi Wants Investors to Step Up, and Slow Down

The investor behind Soho Farmhouse, Anya Hindmarch, Emilia Wickstead, The Conran Shop and others is adamant that investors support businesses, rather than strip them.

LONDON — Slowing down the fashion cycle has become a hot topic in the wake of the coronavirus, but what about slowing down investment?

What if, instead of taking the short or even medium-term view, fashion investors took the long one, and cultivated businesses for years, with no intention of selling, similar to what LVMH Moët Hennessy Louis Vuitton, Richemont and Kering do?

In Britain, committed, long-term investors in fashion and the creative industries are rare. One of them is Javad Marandi, a self-made businessman who believes in taking the long haul with founders and entrepreneurs, and cultivating their companies like rare and precious blooms.

“Britain has an amazing pool of talent from all over the world. They love the British liberal values; they aspire to live here. What I can bring is patient capital, and offer back-office and financial help to support the businesses,” said Marandi, who has put his money behind a variety of companies and individuals here, including Nick Jones of Soho House and designers Anya Hindmarch and Emilia Wickstead.

“I’m a very patient investor, and I don’t have an exit strategy. I would like to keep my businesses forever. That’s the ideal. My partners might want to exit at a certain point, in which case I would support them. But they are under no pressure to do so from my side.”

Last month he added The Conran Shop, the design and furniture retailer founded by Sir Terence Conran in 1973, to his diverse portfolio, which also houses Chais Monnet, a 92-room luxury hotel, restaurant and retail development in Cognac, France and Shirvan, the restaurant run by Michelin-starred chef Akrame Benallal’s on Place d’Alma, in central Paris.

The 52-year-old Marandi arrived in the U.K. as a child with his family following the Iranian revolution, and he was educated in England. His career began in the Nineties, in business development for firms including Coca-Cola International and Philip Morris, and he went on to launch his own export and distribution company with a focus on Central Asia. He later broadened his reach to European real estate.

While these investments don’t appear to have much in common, Marandi would argue that the companies are all led by hardworking entrepreneurs, and he gets a buzz from helping them grow.

Marandi, who works alongside his wife Narmina, said he has no delusions of grandeur — or any intention of forming a luxury group or becoming the next Bernard Arnault, Johann Rupert or François-Henri Pinault. 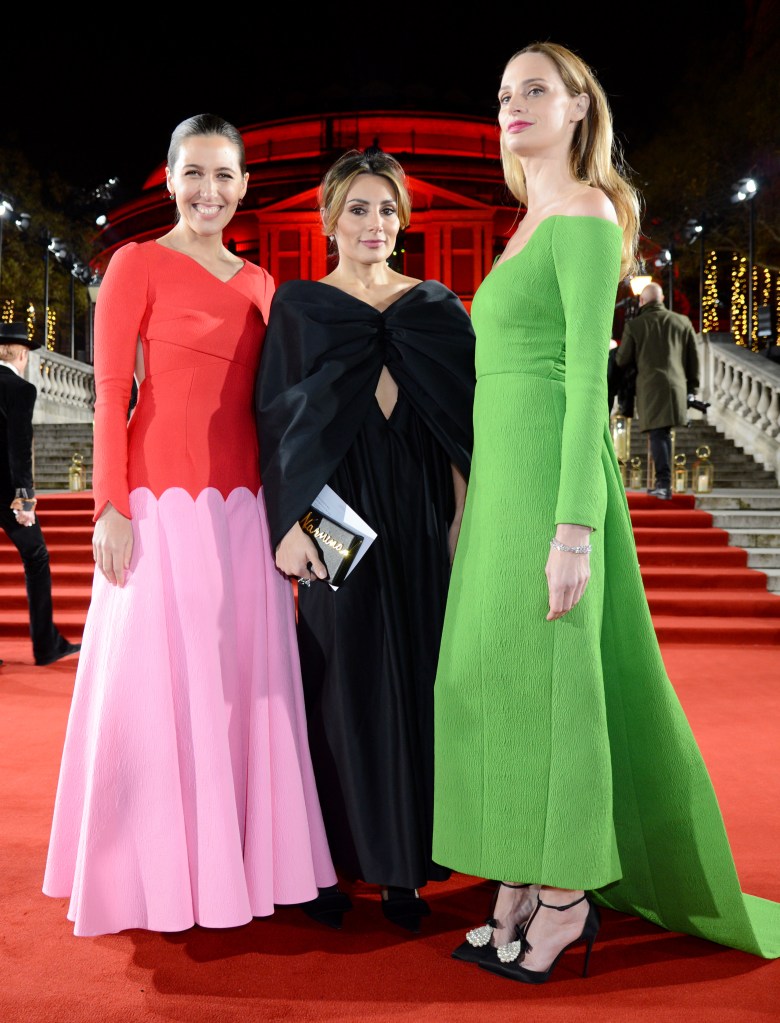 He invests in individuals rather than companies, and prizes hard work and ambition.

“We genuinely get involved when we see an opportunity, when we think the brand is strong, has something unique. But more importantly, we invest when the person who leads it is passionate and dedicated to the brand and to the product. All three companies [Hindmarch, Wickstead and Conran] carry the name of the founders. It’s their brand, it’s their thing. We’re just proud to be supporting them,” he said during an interview.

The same goes for Jones, a cofounder of Soho House. “I knew Nick Jones very well: He had a dream and he wanted to create something amazing, but he needed someone to finance it. I basically bought the [Soho Farmhouse] land, built what we wanted, and he operates it. It’s been an amazing success. He is another one of those people who is extremely talented, hard-working and dedicated. I’d love to be in the same room as him and support him whenever he sees fit — but he doesn’t really need it that much,” he said.

Marandi added that he and Narmina “sometimes meet people who are extremely talented, and their business is probably very good, but they don’t have the passion or energy or drive. Those are the ones we tend to avoid. In an ideal scenario, it’s my job to give the financial discipline and the oxygen for the creatives to do their job, which is creating amazing products.”

He said another big consideration is who might run the company if the founder can’t, or isn’t interested. “You see very mediocre businesses doing extremely well under talented managers, whereas you see extremely good ideas destroyed by bad management,” he said.

He’s not fussy either about the size of the stakes that he and Narmina take: He holds 50 percent of Anya Hindmarch’s business, having purchased it from Mayhoola last year, and a significant minority share in Emilia Wickstead. In May, he bought 100 percent of The Conran Shop.

“We don’t insist on having a majority share — it’s not that important for me. What we do insist on is control of the finances. We want to make sure the money is spent in the right way, or at least have a say in how it is spent.”

He and his team look regularly at cash flow, costs and overheads, while Narmina is more focused on the bigger picture, meeting regularly with Hindmarch and Wickstead to understand their aspirations and the direction they want their businesses to take.

“We want to make sure that we’re really adding value, and we don’t want to get involved in things we’re not good at. This is business — it’s not a charitable endeavor. And our aim is to grow these businesses in a more patient and sustainable way.”

The designers said the Marandis have become part of their day-to-day work.

Wickstead said that when Narmina initially contacted her about investment, “she wrote me a letter connecting herself to the story that I had created and where I dreamt of taking it to.”

Wickstead added that today, “Narmina continues to train my eye to remember what women want and need. She is my best critic and is always very honest when it comes to creative sessions, where we will spend afternoons at the studio together with the team testing and trialing everything, be it designs, fabrics, color palettes, concepts or show production. She has a brilliant eye and aesthetic.”

Wickstead described the Marandis as family and said they give unlimited support. She described them as the “true definition of a partner for our time.”

Hindmarch used similar language when talking about the couple. “They innately understand the nuts and bolts of running a business. They fully back me, and jog along with me on the journey,” she said, adding that Narmina “has the most amazing taste and a very keen eye when it comes to design. I feel very lucky to have met them.”

During lockdown and the gradual reopening, Marandi said it has been paramount for him to instill confidence in his companies.

“We’re making sure these businesses are properly capitalized,” he said, adding that he has guaranteed his businesses that any money he lends them will be interest-free, and will come as a loan, not as equity, as he does not want to dilute the founders’ shares.

“Obviously we have to look at the efficiencies, and at cost-cutting, wherever possible. And this doesn’t mean these companies can have as much as they want. At the same time we’re investing and we’ve guaranteed them for day one.”

Marandi is frank about where the money is coming from: “Commercial real estate. That’s what brings in the short or medium-term liquidity. I develop, own and run hotels not just in the U.K., but in France and Belgium, too.”

Not all of his investments are as glamorous as Soho Farmhouse or Mollie’s, though.

He also has stakes in Center Parcs in Moselle, France; the Sofitel hotel in Brussels, while his Alitas Sarl Group also holds stakes in the German property firm Burlington and a string of Swiss companies in the construction and warehousing sectors. One of his companies owns the McDonald’s franchise and development agreement for Azerbaijan.

Marandi gets his biggest buzz from launching and developing businesses and watching them grow.

“Historically, I’m a development person, the one who goes in first and starts a business. I like when I can start them small, support them, and build them up. Most times, unfortunately, it doesn’t work. But when it does, it’s the most rewarding thing. When you do something well, when it’s successful and people enjoy it, and you can see it grow – I love it. That, for me, is the most important thing. Once it’s successful, it gets boring.”

Looking ahead, Marandi said he foresees a wave of national pride driving sales in Britain, with consumers favoring craftsmanship and authenticity. “London, compared to Paris or Milan or Madrid, has a significantly bigger pool of affluent people who want to buy local, from British designers,” he said, adding, “I think they want to have more conversations, and affinity with the brands, too.”

Marandi also thinks it’s time for other investors to fess up and start taking care of their companies and people, too. He believes COVID-19 is giving them a great opportunity to do so. Last month, Marandi wrote an impassioned op-ed for The Daily Telegraph, entreating investors to take the long view, invest in companies, stop loading them with debt and stripping their assets.

“I just don’t understand, morally, how you can justify that going forward, especially in an environment where we’ll have a lot of socioeconomic issues post-COVID,” he said, adding that investors, and business owners, need to play their part. “We’re not doctors, we can’t work in hospitals to help people. But in our own way, we should take some responsibility.”