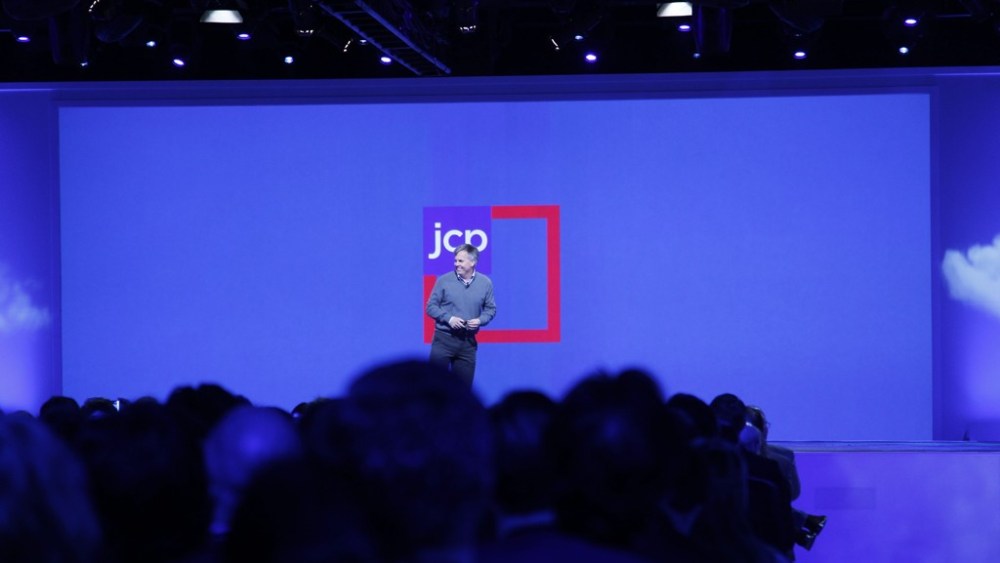 NEW YORK — Ron Johnson is out to rewrite the retail rule book.

In his first public presentation since taking over as ceo last November, Johnson raised the curtain on how he would get there as he spoke from a specially constructed set at Pier 57 here Wednesday. In a flashy, theatrical presentation worthy of any Apple product introduction, Johnson gave his play book before a crowded gathering of about 700 people that included a smattering of fashion celebrities such as J. Crew’s Millard “Mickey” Drexler, Mervyn’s founder Mervin Morris, Michael Graves, Cindy Crawford, Steve Roth of Vornado Realty, Martha Stewart — and even Calvin Klein — who were all curious about Johnson’s plans.

His vision touches everything of concern to consumers, suppliers and investors, from the products and the store environment to pricing. If he implements them all, it could have major implications for retailing in terms of promotions, customer service and store design.

Among the dramatic changes planned:

• Penney’s will chuck its promotionally frenzied, high-low pricing approach in favor of a less confusing, three-tiered strategy that launches Feb. 1.

• The selling floor will convert from the current open sea of racks to 100 individual shop concepts for private and national brands including Izod, Arizona and Liz Claiborne. Shops will be phased in at a rate of two or three a month for the next 3 1/2 years until the whole store is overhauled. Thirty shops are currently under development.

• Getting rid of antiquated merchandise designations. “What is a missy? What’s a pant?” Johnson told WWD, adding Penney’s will be focused on customers’ lifestyles and how they shop today.

• Martha Stewart “stores” inside Penney’s will be rolled out starting a year from now. “Imagine the Apple store…married with Martha Stewart,” Johnson said.

• The center core for accessories, jewelry and cosmetics will become a “town square” in 2013. “We’re keeping it under wraps,” Johnson said.

• A completely new store prototype will be revealed in 2015, incorporating the shops and town square.

Further elements of the blueprint for the future were disclosed by Penney’s president Michael Francis, who said Ellen DeGeneres has signed on to appear in advertisements, and then introduced a new red, white and blue corporate logo, which made its debut in newspaper ads Wednesday. It’s in the form of a box with the lower-case letters “jcp” in the upper left quadrant. The box will become a motif integrated into ads and displays to “frame” new products and visuals.

Both executives suggested a monumental shift in the cadence and personality of the 1,100 J.C. Penney stores. Beginning in February, they’ll all be reset with new products and marketing each month “to fit in with the season and the rhythm of people’s lives,” Johnson said. “No one in retail has ever owned a month. We are getting the entire company in sync with a customer’s life.”

“Every month, every store will go through a radical transformation,” added Francis.

With an air of certainty, Francis also said anyone who shops Penney’s will be “blown away” by upgrades in the merchandise that will be most visible come fall, particularly with some of Penney’s mainstay private brands such as Worthington, St. John’s Bay, Stafford and J. Ferrer. There was no mention of American Living, another private brand, which could be phased out.

Each month, the stores will take on a new identity with a different color palette, and 96-page catalogues or “books” will be mailed featuring an emphasis on editorial, trends and visuals that encourage cross-shopping.

Along with all of this, Penney’s will stage, on a monthly basis, sales and promotions tied to holidays, such as Valentine’s Day, or events such as the Super Bowl. Penney’s will also continue to do the obvious, such as promoting back-to-school in August, beachwear in May and gift-giving in December. January might be themed around “renewal” to highlight exercise clothes.

In the past, Penney’s promotional strategy practically ran amok. The company spent $1 billion last year to stage 590 promotions and, according to Johnson, customers ignored the promotions 99 percent of the time.

Going forward, Penney’s will conduct a promotion a month, at $80 million a pop, saving the company money and making it easier for consumers to figure out the best time to shop for the best values. “We think of our lives in months,” Johnson observed.

With pricing in particular, there’s been enormous curiosity since last summer when Penney’s sent a letter to thousands of suppliers bracing them for big changes. And Johnson didn’t disappoint on Wednesday, disclosing that strategy, effective Feb. 1, consists of everyday low prices, which will cover the majority of the products in the stores, and the month-long values touching about 30 percent of the inventory across all categories and relevant to the time of year and holidays. Penney’s is also eliminating clearances and will introduce “best price Fridays” on the first and third Friday of each month, offering sharp discounts on slow-moving goods. BPF products will not be segregated so customers can create outfits with BPF goods along with related goods at everyday low prices.

“There will be no more clearances — ever — in a Penney’s,” asserted Johnson, who also emphasized that prices will be dropping as the high-low policy disappears. He used as an example a fashion shoe that looked like a ballet flat, which under the old pricing scheme would have been put on the floor with a $40 opening price tag. But under the new scheme, the shoes will open at $30; possibly get repriced as a monthly value for $22 and, if necessary, have a BPF of $15.

Johnson, a former Target Corp. merchant who in his last job ran Apple Retail and orchestrated that chain’s phenomenal rollout, remains a strong proponent of brick-and-mortar as the shopping venue of the future. He represents a dissenting point of view in an industry proliferating with Web sites and reports of burgeoning online sales that are cannibalizing stores. But according to Johnson, when people shop online, more than half the time they end up actually making the purchase in the store.

He also believes consumers don’t trust that retailers are pricing fairly because of their intensive promoting and wide swings in prices all the time. He considers pricing “the fundamental flaw” of department stores — and that correcting the issue will enable him to rethink the way the stores are merchandised and staffed.

The old Penney’s way — the chaotic promoting and clutter that has long marked the messaging — was spotlighted at Pier 57, just as guests came in entering a long, narrow corridor retrospecting ads blasting meaty markdowns, coupons, doorbusters and clearances. But when they entered the main venue, rigged specifically for Penney’s two days of presentations here, the aura was clean and cool, with moody lighting.

Toward the end of the presentation, mock-ups of new shop concepts casting a handful of private and national brands including Izod, Liz Claiborne and Arizona, in a sophisticated light, were unveiled all to underscore the transformation afoot at the $18 billion chain. The setting dramatized Penney’s as it’s been, and what it can be. It’s also possible that The Foundry, Penney’s freestanding men’s concept introduced last year, could morph into in-store shops. Generally, shops will range from 500 to 2,000 square feet.

Reaction to the presentation was strong, with Philip Miller, a former Saks Fifth Avenue and Marshall Field’s ceo, saying Johnson came up with “truly a big idea.” Investors took a cautious view of Johnson’s plan, pushing the stock down 1 percent to $34.27, and analysts were busy weighing the near-term costs with its potential long-term benefits. A fuller picture of the costs of the reinvention should come into focus at the second day of the presentation today.

“The bottom line for us is, ‘Do you believe in Ron Johnson?’” said Charles Grom, an analyst Deutsche Bank, who was impressed by the ceo. “That said, we still feel the duration and cost to fix [Penney’s] will be both longer and costlier than most anticipate.” Gilbert Harrison of Financo Inc., added, “After today, there’s no question Ron Johnson is out to reinvent the department store.”

Activist investor William Ackman — who helped install Johnson as ceo and controls 26.1 percent of the retailer’s stock — said in an interview on CNBC that “you’re going to see more dramatic change in the next few months than we’ve seen in the last 20 years” at Penney’s.

Stewart said she couldn’t comment on Macy’s lawsuit against her. Macy’s, which currently sells the Martha Stewart Collection, was angered when last year she announced her partnership with Penney’s, and now alleges she violated her Macy’s contract, which was extended to 2018. However, when asked how she can begin to sell Penney’s next year and simultaneously sell Macy’s, she replied: “We would not be doing it if we weren’t able to.”

Sources in the crowd speculated Penney’s will pay Macy’s to relinquish Stewart from the contract, rather than litigate the case.