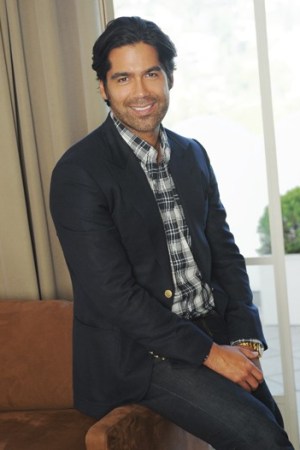 T-shirts That Make a Difference

The company has signed a license with Atwood to manufacture, market and distribute a contemporary brand named B Brian Atwood. The deal seeks to capitalize on the designer’s rising popularity by making his products obtainable by more consumers and brings another talent to the New York-based apparel conglomerate’s brand portfolio that over the last three years has expanded to include Stuart Weitzman, Robert Rodriguez and Rachel Roy.

“We are both partners in this and want to see it grow on a grand scale,” said Atwood, the former Bally creative director who was Versace’s chief accessories designer when he founded his namesake shoe label in 2001. “We don’t ever call it diffusion because it is really a counterpart to the main line. It was something I felt that we needed as part of our brand. We love what we do and if we can give any part of Brian Atwood to a larger audience, that is what really excited me.”

Richard Dickson, Jones’ president and chief executive officer of branded businesses, praised Atwood for honing an authentic design voice that can be leveraged across many categories. “We were inspired by Brian’s passion for what he does, his talent for being a fantastic shoe designer and the vision that he has for his brand going well beyond shoes,” Dickson said. “He has the right persona to develop into a much bigger, branded idea.”

B Brian Atwood, which will be aimed at better department stores and upscale specialty retailers, is scheduled to break for fall 2011 with shoes, followed by jewelry and handbags the year after, and sportswear and sunglasses in subsequent seasons. Although B Brian Atwood’s initial collection hasn’t been developed, Atwood anticipates it will be a relatively tight, urban-oriented assortment of shoes with a stronger presence of flats and midheels than is usual for the Brian Atwood line.

“The cool, East Village girls who have great style are kind of a muse,” said Atwood, who noted the key demographic is twenty- and thirtysomethings. “It will just be with a different edge, but always have the same core values [as Brian Atwood.] Our brand essence is fun. It is lipstick, boys and killer heels.”

B Brian Atwood prices are expected to range from $200 to $500 compared to $525 to $2,900 for Brian Atwood shoes, which currently sell at retailers such as Saks Fifth Avenue and Neiman Marcus. “The Brian Atwood brand has a huge halo,” said Dickson. “There are a lot of women out there that would love to have a pair of Brian Atwood shoes, let alone anything that is associated with Brian Atwood’s name, who probably can’t afford it. This is going to be an accessible luxury.”

Neither Dickson nor Atwood would forecast sales, but industry sources estimated Brian Atwood generates $10 million-plus in annual sales and, with the strength of Jones’ production infrastructure and retail relationships, B Brian Atwood would achieve at least three to four times that volume. Although a tiny brand in the Jones universe — where footwear, accessories and nondenim apparel recorded nearly $1.8 billion in revenues in the last fiscal year — the Brian Atwood connection imbues it with glamour cultivated by numerous red-carpet moments, starting in 2002 when Debra Messing wore lace-up Brian Atwood gladiators to the Screen Actors Guild Awards.

“We do think it [B Brian Atwood] will be multiple millions of dollars, and it will be a strong, healthy brand within the contemporary space,” said Dickson. “We are in the Brian Atwood business, and we want to be in it for the long term, so the distribution strategy will be carefully managed, and the rollout strategy will be carefully managed…to make sure we are in the right doors and that we create demand, that we roll out according to consumer interest and retail support.”

“The Jones family of brands has been primarily associated with Baby Boomers and department store distribution,” said Dickson. “What we are looking at when we take a step back is to make sure as a family of brands we have the opportunity to reach other points of distribution…It diversifies the company. We are working across multiple points of distribution, and we now have multiple brands that appeal to different demographics.”

Growing up in the Chicago suburbs, Atwood had his mind set on being in the fashion industry from a young age and even crafted a backless pink tunic dress for a friend to wear to high school prom. After two years at Southern Illinois University, he moved to New York to pursue a fashion career at the Fashion Institute of Technology. There, a modeling agent from Omar’s Men singled him out at a club, and Atwood was soon strutting the Milan runways and posing for ads shot by Mario Testino and others.

Modeling wasn’t Atwood’s goal, but rather a platform for him to make fashion-industry contacts. The most important contact was with Versace, where he began working in 1996. He designed a pair of shoes that year — leopard silver heels for a Atelier Versace show — and eventually would go on to build Versace accessories from a small part of the brand into a profitable enterprise as chief accessories designer for almost five years.

Atwood launched his namesake brand during his tenure at Versace, which ended in 2004 when he decided to devote his energy full time to his own label. The brand has evolved from concentrating on highly specialized products such as heels covered with handmade lace petals to including everyday basics such as the Maniac pumps that have been recent red-carpet staples. The collection has been embraced by celebrities including Kate Hudson, Eva Mendes, Emma Roberts and Victoria Beckham. The CFDA honored Atwood with Swarovski’s Perry Ellis Award for Accessory Design in 2003.

Atwood joined Bally as creative director in 2007, attracted by the chance to create ready-to-wear and revitalize the Swiss brand. His designs for Bally were generally well received; WWD wrote he “spun a luxurious-cum-edgy template” in its description of the fall 2009 collection. (Atwood hinted that rtw for Brian Atwood, possibly premiering in around a year, and B Brian Atwood would be “a little more sexed up than you would see at Bally.”) Graeme Fidler and Michael Herz were named to succeed Atwood at Bally in March, fueling speculation about his next steps.

Atwood first met with Jones last May, and discussions heated up rapidly about firming up their business relationship. Jones has already drawn up a logo for B Brian Atwood that’s a lowercase “b” scrawled in lipstick. Jones has not invested in Atwood’s original namesake brand, but Dickson stressed the group has an interest in its success, as the main collection gives Atwood an aspirational patina.

“I believe that a good deal is one that happens quickly,” said Atwood. “It was a perfect fit, it happened very quickly and we were all on the same page from the beginning.”

Dickson indicated Jones’ deal-making isn’t likely to stop with Brian Atwood. “It is a time to be aggressive, I would say that specifically for Jones,” he said. “We’ve done a lot in a short period of time, so we are digesting. We don’t want to take on more than we can handle. We do think that the brands that we have taken on and the relationships we have brought in are going to meet and exceed expectations. The company has tremendous momentum. We are bringing in great, fresh new talent and we have a vision for growth.”