The company is eyeing technology as a way to increase customer acquisition efforts. 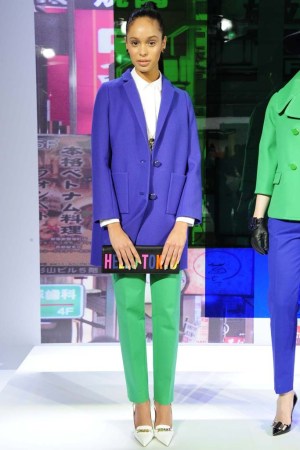 Peter Nygård Bail Hearing Kicks Off With Many Questions

Lee and H&M Join Forces for Denim Rooted in Sustainability

The company last summer launched Kate Spade Saturday via pop-up storefronts with eBay touchscreens and payment processing by PayPal, and is now eyeing that effort as a possibility for Kate Spade New York.

Craig A. Leavitt, chief executive officer, told WWD that the company saw “great feedback from customers,” and is investigating the marketing benefit based on its experience to decide whether to proceed with the same game plan for its core Kate Spade business. “We are investigating ways to utilize that technology,” he said of a strategy that is becoming increasingly more omnichannel-focused.

Leavitt noted in a conference call to Wall Street analysts following the company’s report of first-quarter results that it has been expanding its customer base, and that “61 percent of active customers are new to the brand.” The ceo also noted that for the Kate Spade New York brand in Japan, “our new customer acquisition is even higher than North America at 68 percent.…In Japan, our largest increase was in the 25- to 30-year-old range due to the significant success with handbags, jewelry and small leather goods.”

When asked about the small leather goods category, Leavitt told WWD that it has been “expanding more rapidly than other categories since the holiday period.” Wallets and novelty coin purses are stronger than handbags and seem to be a growing trend for the Kate Spade New York brand.

Leavitt said the growth of small leather goods, which he calls a global phenomenon, represents an “opportunity for overall business expansion,” explaining that the more accessible price points help with the acquisition of new, and often younger, customers. Handbag sales rank second in accessories growth. While sales of watches are slowing as an overall trend for the category, the ceo noted that the watch segment for Kate Spade has “tremendous upside opportunity for customer acquisition because of its price point” and because “watches can be one of our most broadly distributed product categories.”

For the three months ended April 5, the company swung to the black, but still posted an operating loss from continuing operations.

Net sales for the period rose 33.5 percent to $328.1 million from $245.7 million. Sales for the period include the continuing operations of Juicy. Although Juicy was sold to Authentic Brands Group in October for $195 million, Kate Spade continues to operate the retail store business for a short period of time as it completes the winding down of the operation.

Net sales for the Kate Spade brand rose 54 percent to $217 million for the quarter. The company ended the quarter with 127 specialty retail stores, 52 outlet stores and 46 concessions. Sales per square foot for comparable stores “for the latest 12 months were $1,359,” the company said, adding that comparable direct-to-consumer sales, including e-commerce, rose 29 percent in the first quarter.

For the current fiscal year, the company plans to open on a global basis 80 stores, down slightly from the initially planned count of 90, and reaffirmed adjusted earnings before interest, taxes, depreciation and amortization guidance at between $115 million and $125 million.

Shares of Kate Spade on Wednesday rose 8.5 percent to $37.60 in Big Board trading following heavy trading volume of 5.4 million shares, compared with a three-month average volume of 2.1 million.