Kendra Scott on Taking the Time to Empower Mothers, Young Women and Her Own Staff

Kendra Scott speaks to WWD about her newly revised role that sees her focusing on philanthropy, product development and staff engagement.

Kendra Scott is three months into her newly revised role as founder and executive chairwoman, but don’t think that she’s “stepped back” in any way. “I don’t sit still well, I am one of those people that if I don’t have 10 different things going on at once, I’m like, ‘Wow, I need to do something.’ It’s in my DNA; I don’t think I’ll ever able to take too much of a break,” the entrepreneur said.

In handing over the title of chief executive officer of her namesake company to her former deputy, Tom Nolan, Scott saw opportunity to place more focus on the product and philanthropic strategy aspects of her job. She’s now entrenched in spearheading new charitable initiatives for the company, while devising new collections and think-tanking how best to return her workforce to the office.

Much of Scott’s philanthropic work focuses on youth and women’s causes. New this Mother’s Day is the Kendra Scott Mother’s Day PTO Fund, which is awarding 50 moms with $2,000 checks to be used at their discretion. The fund received thousands of applications.

This Sunday marks the second Mother’s Day of this pandemic, a period that has been especially taxing on women — both financially (as has been well documented in unemployment figures) and mentally, as many assumed the stress of full-time caregivers and homeschool teachers.

“There are mothers all over the U.S. that are probably suffering, especially in places that don’t have access to green space as easily to get outside as often. As a woman, you are trying to do your job, homeschooling your child and playing role of teacher and mother. That is, if you are still working — many moms have had to leave their jobs, which has added huge financial distress,” Scott said.

While Scott was aware that $2,000 is “not a life-changing amount,” she said that it is enough to make a meaningful difference. “That can be someone’s rent; child care they desperately need to get a break; it could be used toward self care — we want them to have this ability. One finalist is a teacher who was on maternity leave and wasn’t paid the time gone because of COVID-19, but the $2,000 is almost exactly what she was missing in income and that helped her family so much. You hear different stories and they are all emotional,” Scott said.

Also high on Scott’s philanthropic checklist is to fight the “stigmas” surrounding mental health in the U.S. She’s placed an importance on tackling the issue with young adults so they have mental health skills to call on later in life. “It’s not just moms. As a country we are seeing more cases of depression and anxiety than ever before. The pandemic affected everyone differently, so we are looking at how to take certain youth groups, high schoolers and college students — as well as mothers — to help them with conversations around mental health,” Scott said.

Thus, the Kendra Scott brand has forged a strategic partnership with Active Minds, a nonprofit that spreads awareness about mental health among students. Her brand has appointed ambassadors on college campuses to “empower young adults to speak up around mental health. The first part of it in a lot of cases is to be able to say, ‘Hey, I’m feeling this way,’ and teach people how to have that conversation,” Scott said.

The newly built student center at the Kendra Scott Women’s Entrepreneurial Leadership Institute, part of the University of Texas Austin since 2019, will also welcome back students when the campus reopens this month. Scott will continue to teach there in the fall with her annual entrepreneurship class. 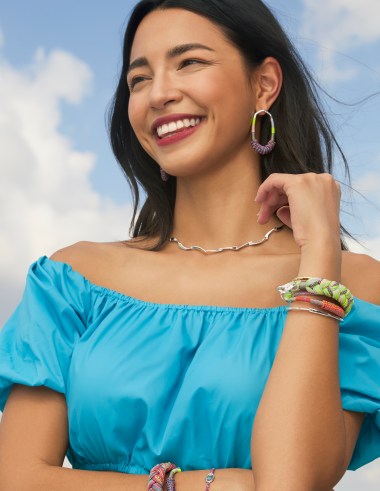 On the product front, Scott has been working to restore a sense of optimism to her shoppers. The summer merchandise hitting Kendra Scott stores now was designed at one of the pandemic’s worst cruxes — driving Scott to drum up a world of color and joy.

“All I wanted to do [then] was be on the beach, so there’s lots of shells and elements of being on vacation — bright, happy colors. I was desperate for joy and color and the idea of being able to go out in summertime in a little white dress with a bold statement necklace. Part of it is fantasizing the places I wanted to go,” she said.

While the Kendra Scott brand gears up for a men’s wear launch this summer, it will also work to build out its demi-fine and fine jewelry assortment. “You’ll see a lot more coming out from the higher-end collections,” she said.

But even with deep philanthropic and product development to-do lists, Scott is also spending time plotting how best to evolve company operations in the pandemic’s aftermath.

“I don’t believe we will be the same world post-pandemic. For us, as a company, we realize our team members are more productive when they are healthy and more stable in their lives. Part of the pandemic taught us that you don’t need to be in a cubicle to be productive,” Scott said.

She believes that employer flexibility will be key to retaining staff and keeping them engaged upon reopenings. As such, Scott subleased half of her corporate headquarter space — laying the groundwork for a hybrid workplace that splits its time between home and the office. “I realized not as many people will need to come back, so we are creating flexible work stations,” she said.

“Companies have to be able to adjust and realize this is a healthier and better way to work. You will retain people that are happy and healthy. Getting a new hire up to speed is such a huge expense for a company, I think it’s a better thing to keep our people and work with them. I’m going to listen to our [work] family and give them those options and empower managers to do the same thing — to listen and lead with their heart. We are being thoughtful about how we will work in the future,” Scott said.