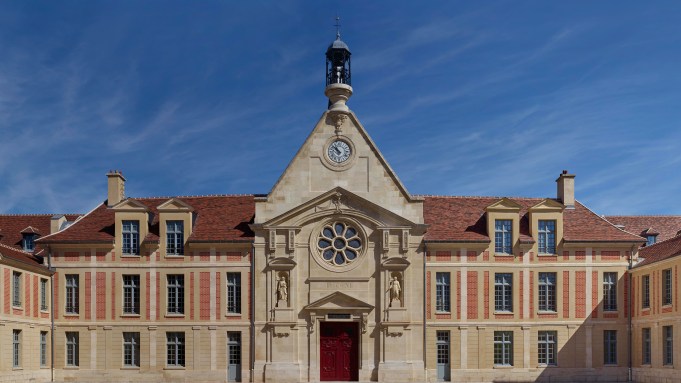 PARIS — Imagine running your fingers through stalks of lavender on your way to the office, having checked the time on the chapel clock and perhaps heard the cries of gulls overhead.

Employees at Kering and Balenciaga don’t have to imagine because they just settled in to such a workplace: the old Laennec hospital, a transporting and tranquil complex of 17th-century stone buildings arranged in cross formations.

It’s a quantum leap from Kering’s old headquarters in a nondescript office building on the Avenue Hoche, a bonsai and some blue armchairs among the few amenities in the austere lobby.

Visitors now alight on a luminous reception area with a birdcage-capped stairwell, a glass cube sheltering a full-size hornbeam tree and walls of verdant plants, signaling the group’s commitment to environmental sustainability.

This week, Kering is inaugurating its new home in grand style: installing an exhibition of 27 dresses by master couturier Cristóbal Balenciaga and another of artworks belonging to the Pinault family, which controls Kering.

In an interview, Kering chairman and chief executive officer François-Henri Pinault characterized the latter showcase as a preview of a forthcoming private art museum in Paris.

His father, François Pinault is to showcase part of his vast art collection at the Bourse de Commerce de Paris, a listed 18th-century building in the center or Paris. Works are to start in early 2017 and the museum’s opening is slated for end of 2018.

According to Pinault, the move to Laennec caps his transformation of the family firm, previously known as PPR and known primarily for its furniture, electronics and department store chains, into a global player in luxury and sports lifestyle. Its new name, introduced three years ago with an owl as the logo, also symbolizes a commitment to corporate social responsibility.

Resembling a quaint French village or an abbey, the Laennec complex spans about 185,000 square feet of space, including soaring vaulted spaces that the fashion crowd discovered at two Balenciaga runway shows under then creative director Alexander Wang.

Vetements founder Demna Gvasalia is now at the creative helm of Balenciaga, and his studio, along with commercial showrooms and headquarters, are now consolidated in one wing of Laennec.

Previously, functions were spread across multiple addresses on the Left Bank of Paris.

Kering is participating in European Heritage Days this weekend, when an array of landmarks and historically significant buildings open their doors for visits. Members of the public can  gawk at the soaring workspaces along with Christ-themed sculptures by Adel Abdessemed and Maurizio Cattelan.

WWD was the first to report in 2012 that then PPR was eyeing a move to the Laennec site, a stone’s throw from the swanky department store Le Bon Marché.

In an interview, Pinault recalled his first nighttime visit to Laennec in a hard hat and boots, as it was then a construction site. Taken to a third-floor viewing point, he drank in the scale of the complex, realized it was too big for Kering alone, and decided on the spot to bring Balenciaga, too, knowing it was outgrowing its multiple spaces.

“It was a bold enough gamble, and I think that today we are lucky to have a place that is a source of inspiration for the teams, enabling them to work better together,” he said, describing an “incredible opportunity to have a workplace that reflects who we are as a luxury group and our values.”

Pinault drew a parallel between the choice of the headquarters and some of its daring design appointments: Hidden talent Alessandro Michele for Gucci; streetwear hero Gvasalia for Balenciaga, and women’s wear buyer Justin O’Shea, who has no design experience, for Brioni.

“Laennec represents for me the image of a different luxury,” he said. “I think it’s a beautiful mission for a luxury group like ours to preserve, embellish and pass on a heritage like this and it has to be shared with everybody.”

That includes very high environment standards in the renovation of the historic buildings.

Pinault described Kering’s former home on Avenue Hoche as purely functional. “It was an office for work, that was it.”

By contrast, Laennec is a “place that gives you inspiration, too. You look out the window and you see greenery in the middle of Paris. Creativity in a luxury group, and in luxury as we want it at Kering, should be everywhere, including at the head office.”

He noted that the 500 employees already seem right at home. “Usually when you move headquarters, you need a certain amount of time, and teams have a bit of trouble adjusting. Here it was love at first sight for everyone,” he said. “People are happy to work, are proud of their offices. They have a picnic on the grass. It’s like a campus.”

Kering has a long-term lease for Laennec, and Pinault noted Yves Saint Laurent, now under the creative leadership of Anthony Vaccarello, would move to Rue de Bellechasse on the Left Bank in 2018. “It’s also a place that speaks for the house,” he said.