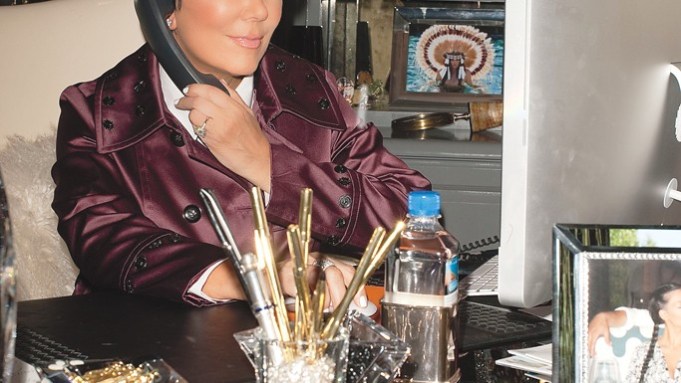 As the saying in Hollywood goes, behind every great brand, there’s a great manager. In Kris Jenner’s case, make that “momager.”

The Kardashian-Jenner matriarch, who manages her famous offspring’s careers, has been justifiably credited with her family’s success, much of which has been in the fashion arena lately.

“The Kardashians could easily be a billion dollar business worldwide in the next two years,” said Brian Dow, head of the branded lifestyle division and a partner at APA Talent & Literary Agency, which reps all five Kardashian sisters in the fashion and lifestyle licensing arena. APA worked on the Sears Kardashian Kollection deal with Jupi Corp., which has been the sisters’ biggest fashion deal to date, on target to generate $200 million to $300 million in retail sales in the first 12 months, according to Jupi president Bruno Schiavi.

“I see their brand becoming global, in the Middle East, Europe, Asia, South America and so on because the show plays in over 100 countries,” said Dow of “Keeping Up With the Kardashians,” one of their reality TV series. Jupi also has plans to take Kardashian Kollection into international retailers.

Apart from being a champion multitasker, Jenner is a manager by trade. Her first client was her husband, Olympic gold medalist Bruce Jenner, whom she met 21 years ago. After they married, she took over managing his career.

“I started managing all his motivational speaking engagements, his deals with Coca-Cola and Visa, and his first job after the Olympics, which was the Wheaties ad for General Mills. When I married him, I thought, ‘Wow, we could expand this to a whole other level,’ and we did. Bruce is still on the road [speaking], so we must be doing something right,” she said.

Cut to 15 years later: There are two more daughters, Kylie and Kendall Jenner; Kris Jenner’s four children with first husband Robert Kardashian are all grown up, and her son Rob is also involved in the family enterprise. “It was just so easy to transition into [managing] the kids and not even blink an eye,” Kris Jenner said.

“They have the family aspect which no one else has done,” said Dan Levin, managing director of global licensing agency Beanstalk’s Los Angeles office. “That is their differentiating point. They are trailblazers. Who else has been that type of a family brand? They are really omnipresent as a family. They might have different tentacles but at the end of the day, it’s a family business.”

But why fashion when there are so many other routes to take in Hollywood? Apparently it’s in the genes. Kris’ 76-year-old mother, Mary Shannon, continues to own and operate a children’s clothing store in La Jolla, Calif., called Shannon & Co., so Jenner and her daughters grew up in retail. They later went on to open the women’s apparel store Dash in Calabasas, Calif., in 2006 (there are now locations in Miami and New York’s SoHo) and the kids’ apparel store Smooch (closed in 2009).

“It’s something we all love doing, and I’m passing that down to my children. We love fashion and the history of fashion,” Jenner said. Shortly after Smooch opened, E! Entertainment Network approached the family about doing a reality show, and the “Keeping Up With the Kardashians” phenomenon was born. It has even spawned spin-offs, including “Kim and Khloé Take Miami,” “Kourtney and Kim Take New York ” and “Khloé and Lamar.”

With the show lending a spotlight to the girls’ and Kris’ individual styles, licensed clothing deals were a natural step. The first was the K-Dash line with QVC, which launched at the shopping channel’s 2010 Fashion’s Night Out event in New York.

“It would have to be one of the most successful launches in this space,” said QVC’s executive vice president of merchandise, planning and sales, Doug Howe. “We have sold 100,000 units to date, and we have just scratched the surface.”

Ranging in price from $28.50 to $310, the line comprises apparel, outerwear, scarves, belts and handbags. Howe said the network plans to deepen the apparel offerings “because the girls are such fashion icons” and that QVC has also seen a bump in its online business, thanks to the girls’ tweeting about their nine-and-counting live on-air shows.

“We’ve seen the power of social media as it relates to this line,” he said. “And it’s reinforced that our customers are very attuned to what’s happening in pop culture.”

Jenner said her family’s involvement in all of its licensing projects is full on.

“I watch the girls when they start a line and they are involved from soup to nuts because they want to do something that has legs and a future 25 years from now,” she said.

K-Dash maker Mark Locks agrees. “The girls have been hands-on in every aspect of the business, and the return has been huge for us,” said Locks, global president of Tiger J, which produces both K-Dash and Kris Jenner Kollection. “So it was a no-brainer to launch [Kris’ line].”

From Jenner’s strategic and maternal perspective, it was about launching her daughters’ lines before her own, which bowed at QVC’s 2011 Fashion’s Night Out event last month. “It’s always been my dream to have my own line, but it’s also about timing,” she said. At $35 to $130, Jenner’s line comprises classic staples as well as fashion-forward items. The next extension planned is fashion jewelry, bowing for spring.

“We were really impressed when we first met with Kris for K-Dash at how she can multitask and how organized she is. She is really passionate about the business, and she’s great at selling her own line because she is very connected with the customers,” said Howe, adding that two of the five items launched on the Sept. 8 FNO show (a black vest and leopard-print cardigan) sold out immediately.

As for the sisters’ first in-store line — Kardashian Kollection, including apparel, intimates and accessories — “It’s been in stores about six weeks, and the response has been phenomenal,” said Jupi’s Schiavi. Presale items sold out within 48 hours and the first Los Angeles [personal appearance] drew 9,000 people.”

Styles that vanished immediately included a leopard-print dress, a black jumpsuit and swing coat. The line, numbering about 600 sku’s for the initial rollout and priced from $24 to $129, will also introduce denim, activewear and loungewear this year. Some of these categories were slated for a 2012 launch but moved up because of the demand. Home accessories were originally slated for 12 months down the road but have been fast-tracked to next March. A deeper selection of swimwear will bow in April as planned.

“What’s great about Kardashian Kollection is that it’s the beginning of something new and different for Sears’ apparel business. We are starting to see our contemporary business develop, and the Kardashians are a big part of leading that charge,” said John Goodman, executive vice president of home and apparel at Sears Holdings.

For Sears, developing its contemporary business alongside juniors and traditional lines is part of a larger plan to overhaul the general perception of its women’s offerings.

“We’re not sitting still,” said Goodman. “It’s a big opportunity for us.”

As for Kardashian Kollection abroad, Jupi Corp. plans international launches in the U.K. and Italy similar to the Sears relationship, as well as a launch in Australia’s David Jones department store and 500 boutiques there.

In comparison to Paris Hilton and Jessica Simpson, whose retail empires are said to be worth nearly a $1 billion each, Dow of APA Agency said, “I think [the Kardashians] will exceed that level pretty quickly. The difference between them and other celebrities who have launched brands is that they are doing it while they are still extremely relevant. We work with some clients who choose to go into licensing once their shows are off the air or once they aren’t making music anymore, but we were smart and did this now [with the Kardashians] and that is why it’s taken off the way it has. It’s sort of the perfect storm.”

In terms of their staying power as a brand, Dow said, “In five, 10 years, this is not going to be over. And it’s not just about the money, they actually do love the work, that’s how they were raised.”

Although the sisters do most things as a team, they also strike solo deals. Kim partnered with jeweler Pascal Mouawad to launch a fashion jewelry line, Belle Noel, last year. The line is part of Mouawad’s Glamhouse firm, which is devoted to fashion jewelry and celebrity collaborations while his family’s namesake company specializes in fine jewelry.

“Belle Noel so far has been the biggest launch for Glamhouse,” said Mouawad, who also produces Nicole Richie’s House of Harlow line. Belle Noel, priced at $45 to $150, is sold in Bloomingdale’s, Nordstrom, Neiman Marcus Cusp and on Shopbop.com.

“We just finished a successful Coterie and retailers have placed deeper orders for spring.” Once again, a Kardashian seems to be the driving force behind a company’s growth plan. “Our goal is to be a major player in the fashion accessories market and Kim is on board,” he said. “I see this being in the market for hopefully 10 years, and it’s off to a good start. We expect to make $3 million wholesale in our first 12 months, which exceeds our goals.”

Also on her own, Kim has appeared in a Skechers Shape-Ups ad campaign and brother Rob is currently an Op spokesman and appears in its fall 2011 ad campaign along with Mark Salling, Chord Overstreet, Aly Michalka, Kat Graham and Brenda Song.

“Rob has truly embraced the brand from photo shoots to events to authentically wearing the product, and he’s also a great supporter of our social media efforts,” said Dari Marder, chief marketing officer at Op parent Iconix Brand Group. “It was an added bonus when we received sisterly love from Kim, Khloé and Kourtney as they have each tweeted about how great Rob looks in the ads and how proud they are of him. Kris Jenner even came to our set to check out how Rob was faring as a model. It’s a family affair when working with the Kardashians.”

Underscoring her family’s commitment to its burgeoning fashion empire, Jenner again referenced growing up in retail: “It’s where we started, and in a perfect world, where will we end up.”