Influencer marketing is at an inflection point. Brands are looking to jumpstart their reach and engagement on social media, and influencers are a surefire way to supercharge those efforts. But working with individuals to promote products is no longer a strategy secret — in most cases, consumers know they’re being marketed to — and influencer content still receives massive engagement numbers.

Even with the increased consumer awareness and regulatory attention to sponsorships, brands are jumping in headfirst. Out of more than 500 brand Instagram handles across nine sectors, Gartner L2 found that nine out 10 tagged influencers in at least one post in the 12 months leading to March 2018, and, according to one survey of marketers, more than a third intend to increase their influencer budgets throughout the rest of 2018.

While influencers and brands are all in, at the other end of the spectrum, social platforms hosting influencers are maturing and looking to grab a slice of the pie that was originally out of reach. When working with verified influencers with business accounts on Instagram, for example, brands can put paid spend behind influencer posts to boost reach. These posts have a higher chance of appearing in the news feeds of followers, only indicated by a “Paid partnership with brand” tag in the space usually reserved for the location, often referred to as the geotag.

In one example, Halo Pets, which works with a roster of popular pet influencers (pet-fluencers?), utilized the paid sponsorship geotag on several posts with Lil’ Bub (@iamlilbub, 1.9 million followers), which appeared on both her profile page and in followers feeds. 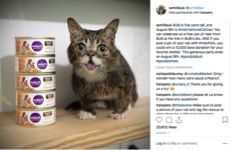 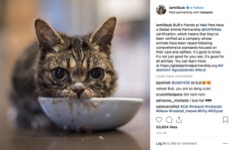 Would Halo Pets’ Instagram account ever have the star power of Lil’ Bub or any of its other pet-fluencers on Instagram? Possibly, but with less than 10,000 followers, it has a lot of work to do to get there. And the pet food brand isn’t alone. According to an analysis by Gartner L2, consumer packaged goods companies accounted for approximately 1 percent of posts and less than a fifth of a percent of total interactions — 0.15 percent, to be exact — compared to other categories. Influencers represent a huge opportunity for CPG, beverage, consumer electronics and watches and jewelry brands to level the playing field with social media best-in-class categories like beauty, fashion and retail.

While we know that influencers pack a punch with their outsized audiences, a lot of the brands engaging influencers are within those best-in-class categories. How can they utilize influencers to best impact their social clout and find new audiences?

To answer this question, Gartner L2 assembled and tracked a panel of more than 2,600 fashion and lifestyle influencers. In more than a year’s worth of posts, those influencers mentioned 70 percent of brand handles in our original list of 500, which when accounting for regional or secondary handles, represented 381 brands across nine sectors. While only a select few of the influencers were using the geotag on their posts, it can be assumed that a good portion of those posts are some sort of paid relationship either through product, trade or direct payment.

These partnerships benefit influencers’ engagement numbers in addition to wallets. When an influencer post mentions a brand handle, there was an average engagement lift of 14 percent over posts without any brand mentioned. While this boost occurs across influencers of all sizes, engagement increased the most for celebrity and advocate influencers, with fewer than 5,000 followers. In addition, when advocates mention brands, it often increases the ratio of comments to likes on their posts, indicating that a lot of longtime followers are rooting for their favorite social media stars’ continued success.

The core strategic questions around selection, content production and measurement remain top of mind for brands across all sectors. To help brands just starting out, or honing their existing influencer programs, Gartner L2 has broken down our insights into three main themes to help brands build lasting and impactful influencer programs:

Pre-Define a Strategic Framework: Influencer marketing can be a short-cut to social engagement, but it can also quickly match the costs of traditional content and advertising if not clearly defined from the start. Set goals and guidelines for partnerships based on influencer community size and expected engagement. Celebrity and mega influencers are best leveraged for reach and micro influencers for authenticity, consistency and exclusivity.

Stop Chasing Zeitgeists: While some brands do find success with breakout stars, brands don’t need to go all in with one or two celebrity influencers to make an impact. Find smaller influencers that fit with your aesthetic and build long-term partnerships for a steady stream of fresh social content and traffic, and take advantage of new platform tools to boost that content via stories and paid promotion.

Transparency Is Essential: With the increased scrutiny attached to influencer marketing, brands need to carefully weigh their own social capital against those of influencers and be completely transparent about sponsorships. This is especially the case with mega and celebrity influencer partnerships, and can serve to insulate the brand should the influencer go off the rails as we’ve seen recently with Fan Bingbing and last summer’s brouhaha among the beauty industry celebrity influencers.

Mike Froggatt is director of research at Gartner L2.