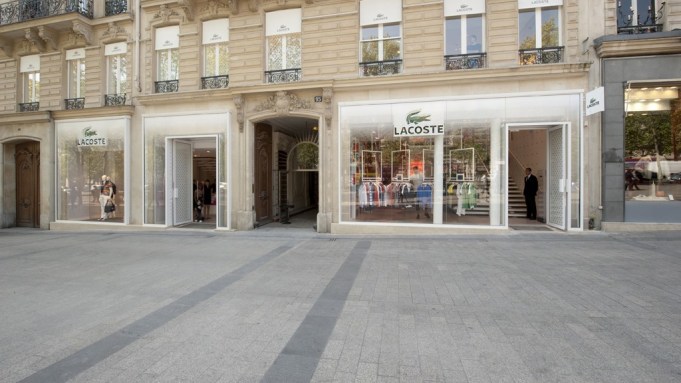 Lacoste will host a global summit in Paris for 500 managers and partners from around the world on Monday, where it will outline its forward strategies in key areas like product development, retail expansion and marketing. The conference, at the Palais Brongniart, is also aimed at improving coordination among Lacoste’s license partners and redefining core areas of investment.

The special meeting comes in the wake of the acquisition last November of the Lacoste brand by Switzerland’s Maus Frères SA, which also controls Devanlay SA, the Lacoste apparel and accessories licensee. The deal consolidated control of the core Lacoste business under a single corporate umbrella, enabling a streamlined management and decision making structure.

“Today everybody works together. There is more brand coherence,” said José Luis Duran, chief executive officer of Lacoste Holding, the new entity that owns both the Lacoste brand and Devanlay. He spoke to WWD following the Lacoste runway show during New York Fashion Week.

Duran is aiming to capitalize on the new Lacoste ownership structure by refocusing investment on key flagship cities that will drive growth and serve as windows to the brand for customers around the world. He has designated New York, Paris and Shanghai as Lacoste’s first “worldwide anchors,” where the company will devote outsize resources to upgrading the image of the brand, enlarging stores and improving merchandise.

In Paris, where there are 12 stores, Lacoste has increased the average unit size from 915 square feet five years ago to more than 1,800 square feet today. In New York, where there are four stores, a new 2,000-square-foot unit will open in the Westfield World Trade Center shopping mall, now under construction, in 2015. At key wholesale partner Macy’s Herald Square, the Lacoste shop was expanded from 1,400 square feet to 2,600 square feet in May, with a Lacoste sales and visual team on site daily.

“We invested quite a lot of money, a new shop concept, new furniture and our own people. It’s a great brand statement, and it’s [led to] great performance compared to what we had before,” said Duran.

Next month, Lacoste will install a new concept shop at the Saks Fifth Avenue flagship in New York, following an extended absence there, and new merchandise assortments will be initiated across 39 Saks locations. A Lacoste lifestyle shop was eliminated from the Fifth Avenue store in 2009 when the retailer “had to make some difficult cuts” due to the recession, said Eric Jennings, vice president and men’s fashion director at Saks Fifth Avenue.

The new Saks program features an updated fit exclusive to the store, in two different programs, one with an embroidered gold crocodile logo and the other with an embroidered tonal logo. “We were missing a strong polo program, so this made sense,” said Jennings.

Currently, there are 64 full-price Lacoste stores in the U.S. and 43 outlet units, plus the e-commerce site. Duran doesn’t plan on adding many new stores here, noting the store network is “pretty dense” already. Globally, there are 1,200 stores, operated by both Devanlay and local partners.

The emphasis on flagship markets and stores will inevitably draw resources from secondary markets and lower-tier stores. In the second half of this year, Lacoste is closing 35 underperforming units in countries including China, Japan and France. “This is life. You can’t only do plus, plus, plus,” reasoned Duran.

New doors will be added in emerging markets like Brazil, Turkey and Russia as a complementary initiative to the heightened focus on anchor cities. Indeed, São Paulo, Istanbul and Moscow will become flagship cities in later seasons, said Duran.

Currently, North America represents 20 percent of sales, France is 10 percent, the rest of Europe is 35 percent, Asia is 20 percent, Latin America is 11 percent and the Middle East and Africa is 4 percent.

Duran believes Lacoste has been too conservative in some markets. In Germany, where sales have been sluggish, the brand is “too classical,” he noted. “We operate only 80-square-meter [860-square-foot] stores there,” he explained. “You need square meters to be recognized as a global lifestyle brand.”

Apart from store size, increasing the average prices of Lacoste product is a top priority for the company. Duran is targeting a range of categories, such as bags, polos and woven shirts. In the bread-and-butter polo category, he believes average selling prices can be boosted from $85 to more than $95 by offering advances in fabrics, styles, colors and fits. “We can’t rely on our classic 1212 polo fit. That game is over,” he emphasized.

While implementing upgrades on product, Lacoste is slashing total stockkeeping unit counts by 13 percent in 2014, in order to reduce product development costs and focus on higher-quality offerings.

Total Lacoste sales growth this year is forecast in the midsingle digits, down from 14.2 percent growth in 2012, when sales were 1.8 billion euros, or $2.31 billion at average exchange for the period. Men’s makes up 70 percent of brand sales, women’s is 20 percent and children’s is 10 percent.

Growth has been more erratic by geography this year. “Last year, everyone was contributing growth, except for Italy. This year, we see great contributors such as Brazil, Turkey, South Korea and France. But we also see difficult situations, such as Italy again, Germany is a sluggish market and Japan is having a so-so year,” Duran said.

Apparel accounts for 63 percent of Lacoste sales, footwear for 19 percent, fragrance for 12 percent, leather goods for 4 percent, eyewear for 1 percent and watches for 1 percent. License partners are Pentland for footwear, Procter & Gamble for fragrances, Movado for watches, Marchon for eyewear and Sunham for home textiles in North America.

The new management structure headed by Duran has been reduced from the former nine-person team at Devanlay and eight at Lacoste to a new unified eight-person team. The group includes new hires Berta de Pablos, marketing and branding group director, and Laurent Israel, product group director.

At the conference on Monday, Duran will unveil to attendees the spring Lacoste advertising campaign, which he dubbed “very different from what we have done for the past three to four years.”

In his new role governing the brand, Duran instituted an overhaul in the creative team overseeing Lacoste at ad agency BETC, a unit of Havas Worldwide. “Very honestly, I had a mitigated opinion of the creativity of what has been done over the past years. I was not happy,” said Duran. “We are changing, and we are inviting our partners to change with us.”