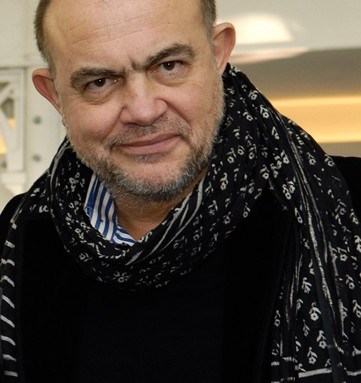 EDITOR’S NOTE: In the wake of Christian Lacroix’s Chapter 11 filing last week, the designer has told his collaborators that he will give “200 percent” to keep the 22-year-old couture house intact.

The goal is to “preserve the know-how, without which the lungs and the heart of the house couldn’t exist,” Lacroix writes in a letter to the firm’s 125 employees, excerpts of which were obtained by WWD.

PARIS — Squeezed by the economic crisis and a costly upscaling drive, Christian Lacroix SNC has sought court protection from its creditors, WWD has learned.

The Paris-based fashion house filed a petition with the commercial court here Wednesday, reflecting the vulnerability of wholesale-dependent brands amid the sharp downturn in luxury spending.

“Our intent is definitely a continuation of the business,” Nicolas Topiol, Lacroix’s chief executive officer, said in an interview before meeting with the firm’s 125 employees. “But the crisis has definitely hit us below the knees.”

Lacroix won wide acclaim in March for his chic take on Parisian style, from tapered peacoats to draped jersey dresses, but the venue — a shabby parking garage in the Marais district — spoke to the firm’s financial constrictions.

He allowed that some restructuring, including job cuts, were likely, but he painted several possible scenarios, including a sale of the company. As first reported in WWD April 3, Lacroix’s owner, Florida-based Falic Group, has been in advanced discussions with a group of investors from Switzerland. Last year, Falic Group began searching for potential investors to help accelerate the fashion company’s expansion and capitalize on the brand’s recent repositioning as a pure luxury play.

On Wednesday, Topiol said talks with the Swiss group are ongoing, and that the voluntary petition, the U.S. equivalent of Chapter 11, could attract additional suitors. He declined to identify the Swiss investors, but said the filing “doesn’t mean the end of the story. It’s the beginning of another chapter.”

He described “quite a bit of interest” in the Lacroix business since Falic Group began seeking potential partners, crediting widespread media coverage of the firm’s couture and ready-to-wear creations and a burnishing of its upscale image, aided by the termination of the lower-end diffusion lines Bazar and Christian Lacroix Jeans.

“The perception of the brand and its power is very strong,” Topiol said. “It’s the key to future development.”

While declining to give specifics, he said Lacroix recently attracted some additional licensing partners, with new products slated for introduction in 2010.

The designer and Falic principles declined to comment on Wednesday’s filing, but Topiol said the shareholder is prepared to finance the company’s operations during the reorganization period, which is usually set for a minimum of 90 days.

Still, the petition throws into question Lacroix’s pre-spring rtw — with most designer brands taking orders now and in the coming weeks — as well as its participation during Paris Couture Week July 6 to 9. Topiol said both collections are in progress and are among the most pressing topics to take up with the court and its appointed trustee. A hearing is expected next week.

Given the context, a scaled-back presentation for couture is “most likely,” Topiol said. However, he noted couture remains “its most flexible business because we do most of it internally and we have a very dedicated group of clients.”

He characterized couture sales in 2008 as “flattish,” far better than its fortunes in rtw.

“It’s been challenging the last few months,” he said, describing wholesale clients who have canceled orders, paid late or not paid at all.

“The objective is to protect the assets and the employees of the company,” he said, describing a deterioration of its business across almost all regions. “The only market that has so far weathered the storm is Asia and Southeast Asia, where we don’t really have a presence.”

Part of Lacroix’s costly repositioning included signature boutiques in New York and Las Vegas that opened in 2007. The firm also operates three stores in France, and wholesales its clothing and accessories to about 150 retailers.

Hailing from the southern French city of Arles and drawing on the region’s rich gypsy and Provencal traditions, Lacroix burst on to the international fashion scene in the Eighties as the designer of Jean Patou and the creator of the pouf skirt. Bernard Arnault, chairman and ceo of LVMH Moët Hennessy Louis Vuitton, set up a couture house just for him in 1987, electrifying the Paris high fashion scene and landing the designer on the cover of Time magazine.

However, after a revolving door of executives, a failed perfume attempt and what Lacroix lamented as lackluster development of his house, LVMH sold the company in 2005 to the Falics, best known for their Duty Free Americas chain. Falic Group had also purchased Hard Candy and Urban Decay from the French conglomerate.