These Platforms Are Putting Latinx Fashion on the World Stage

Latinx designers are making greater inroads into global fashion, and new platforms showcase the fresh perspectives and innovative designs many are bringing to the industry.

By Kathryn Hopkins and Emily Mercer on October 7, 2020

Latinx designers are making greater inroads into global fashion, and growing platforms are hoping to elevate these creatives and showcase the fresh perspectives and innovative designs many are bringing to the industry.

Here are four platforms working with Latinx designers to highlight their work, promote it and make it available for the world to witness and wear.

During her more than 20 years working in New York’s fashion industry, Estefania Lacayo, originally from Nicaragua, had seen many designers, entrepreneurs and writers from Latin America struggle to get noticed in the U.S. That’s why she cofounded the Latin American Fashion Summit three years ago “to empower our community of Latin Americans and also of Latinos living in the U.S. wanting to tap into this whole world of fashion.”

“They wouldn’t even know who to approach, how to go about it so they were constantly being ripped off by p.r. firms in New York promising them p.r., showrooms promising the sales, trade shows promising them millions of buyers, and at the end of the day, they would spend all of their money and they would have no relationships, no sales,” she said. “When I would hear all of this I was like ‘wow this is crazy. You guys just need to meet the right people. Your voices just need to be heard.…They just haven’t had the opportunity.’” 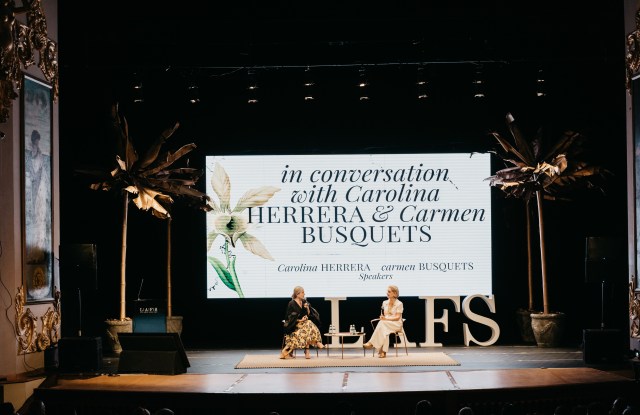 The first summit was held near Tulum, Mexico and the second in Cartagena, Colombia, with speakers including Carolina Herrera, former Calvin Klein designer Francisco Costa and Vogue Mexico editor in chief Karla Martinez. Rather than hold a fashion show, the summit helps attendees develop the skills they need to be seen on world stage through workshops and networking. Sessions are often focused on tech and media, business strategy and sustainability.

This year’s event was also meant to be held in-person, but the pandemic forced it to go virtual and will now be held on Oct. 19 to 23. The live Latin American Fashion Summit is typically capped at 750 attendees, but going virtual will lead to greater attendance this year. Through hosting free webinars throughout the pandemic, the group has connected with many more people and grown its database by around 150 percent, according to Lacayo. Tickets for the virtual summit are priced at $99, with a portion of the profits going to El Salvador-based nonprofit organization Glasswing International, which works to improve education and community development across Latin America.

Sí Collective, a community of creatives that cultivates Latin American fashion and lifestyle brands for the international market, acts as an extension of the clients’ in-house teams.

“Latin American design can and does compete with other international brands on a global scale,” said Sí Collective cofounder Cloclo Echavarría, who has helped launch labels like Johanna Ortiz, Mercedes Salazar and Agua by Agua Bendita.

Cofounder and former Vanity Fair editor Isabella Behrens agrees: “We want people to see the region’s many facets,” she added. “What sets our brands aside is the handmade aspect; in today’s industry, that is the measure of true luxury.”

A budding brand usually approaches the duo for a full analysis, and Sí Collective then sets out to work on areas including branding, relationship management, sales, strategy and creative. They also offer services like local production, copy writing and graphic design though their network of freelancers.

During the pandemic, some of Sí Collective’s clients needed help moving stock since many leading retailers canceled wholesale orders, devastating small and emerging brands, especially those without their own e-commerce capabilities. This led to them to partner with luxury platform Fashionkind to offer brands a new online retail space. According to Echavarría and Behrens, it also allows their clients “to honor their commitment to the men and women who create their pieces — masters of ancient weaving and crafting techniques that are at risk of disappearing if not properly supported.”

Former investment banker and wealth manager Nina Farran founded the ethical e-commerce fashion platform Fashionkind in 2015. The platform curates sustainable luxury products from companies that give back to underserved societies and the environment, and consumers can shop via various impacts, such as women’s empowerment, emerging economies, artists and craft, vegan product, and sustainable materials, or by region, like made in the U.S.

“Fashionkind really exists to redefine the luxury shopping experience online because today’s consumers really seek that human and emotional connection,” Farran said. “They care about craftsmanship more than they care about brand name. They care about investing in what reflects their values.”

During the pandemic, Fashionkind has been assisting designers from Latin America through its partnership with Sí Collective. The platform added 21 designers to the site, many of whom had focused on wholesale rather than their own e-commerce channels and were struggling to shift stock.

“It’s an opportunity to help them survive and help their artisans survive through the crisis, but also give this insiders’ peak into Latin America because I think many consumers have a very specific idea of what they think Latin American fashion and design is and that tends to be a pretty limited idea,” she added. “It tends to be big ruffles and color and frills and that’s part of it for sure, but there’s so much more and there’s so many more design techniques and aesthetics coming out of the area.”

In August, Sofia Bibliowicz and Dan Gleason launched Unidos, a bilingual platform highlighting creatives of the diverse Latinx community across the globe. The duo, who met through their fashion industry careers, wanted a space where they could showcase a variety of voices who embody their culture, including fashion designers.

“We wanted to create a space where we could get away from the ‘Latino-stereotype’ the media has created through the years.” Gleason explained.

The idea for a collective community platform had resided within Bibliowicz for some time. Born in Ecuador to Ecuadorian and Colombian parents, Bibliowicz felt a lack of her Latinx identity being celebrated within the industry. While researching a trip to Colombia, she noticed a lack of non-American publications and platforms spotlighting Latinx cultural country and city guides. “This is an opening,” recalled Bibliowicz, a New York City-based public relations expert who has worked with Maryam Nassir Zadeh, Telfar and Neiman Marcus, among others, and who is now Unidos’ cofounder and editor in chief.

Once COVID-19 hit and business was down in March, she called Gleason to ask for his advice and gauge his interest. Gleason, a Mexico City native and freelance creative — who cut his teeth at Vogue Mexico and Latin America, and Solar Magazine under Michaela Dosamantes — loved the idea. Quickly, and seamlessly, they became cofounders. Gleason is also Unidos’ content manager.

In April, the duo started developing the platform around the idea of a worldwide Latinx platform with a positive, uplifting voice at the forefront. Unidos in English is “United”; cemented by the brand’s message “We’re better together.” Bibliowicz’s and Gleason’s combined extensive industry experience helped build out Unidos’ first platform on Instagram. 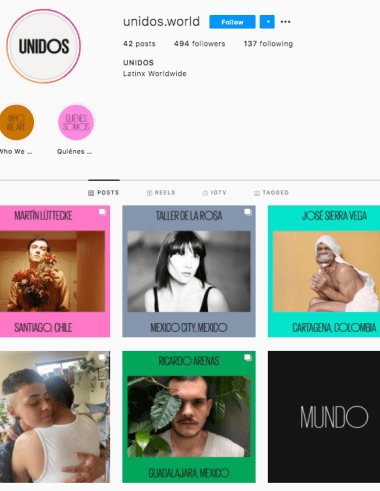 Unidos made its debut on Instagram, @Unidos.world, in early April, followed by its official launch with bilingual features in August. Its Instagram includes question-and-answer feature profiles and portraits spotlighting global Latinx creatives, like shoe designer Isa Tapia, photographer Rodrigo Álvarez, stylist Ricardo Arenas and accessories designer Gabriela Viteri, etc. The profiles will live on the brand’s upcoming web site. A landing page is now up at unidos.world, and the full site is expected to launch in November. A newsletter, videos and cultural guides will run alongside upcoming feature stories (including a spotlight on Ecuadorian chef Rodrigo Pacheco from Netflix’s “The Final Table”), and the cofounders have dreams of developing e-commerce and eventually, a book. “We want to be a platform, in every sense, for artists,” Bibliowicz expressed.

“We truly hope to remind the younger Latin generations that we are strong and most importantly: we are free to be who we want to be…” Gleason said, adding “Hopefully Unidos will actually make a positive impact in the community. We really want to build bridges and not walls.”

Adding to that, Bibliowicz said, “When we are all supportive, the world is a much better place and incredible things can happen.”