The plan is to grow sales from $30 million to $300 million by adding classification product.

Ike Franco keeps a low profile — and that’s just the way he likes it.

The cofounder and principal of Infinity Group and managing partner of Infinity Lifestyle Brands helms a brand management firm that operates in the same vein as Authentic Brands Group and Marquee Brands. But he’s more likely to be found quietly negotiating behind the scenes than boasting about it in public.

Most recently, Infinity was among the companies hot in the bidding process for Roberto Cavalli, but the brand ultimately wound up being sold to Vision Investment Co.

So while Infinity continues to seek its next target, it is concentrating on the relaunch of its latest brand, Le Tigre.

In November 2015, Infinity partnered with Hilco Brands to purchase the intellectual property of the sportswear label from Kenneth Cole Productions for an undisclosed amount in a private asset sale.

Infinity specializes in the acquisition and repositioning of mismanaged, underutilized or dormant consumer brands in the fashion, home, food and consumer electronics channels that it deems have high awareness value. Le Tigre fit that bill.

“We look for brands with a strong heritage that have never been tainted and have the ability to be repositioned,” Franco said. “And Le Tigre has that.”

The brand was founded by Campus Sportswear in 1977 as a classic American sportswear collection that could be a competitor to Lacoste. It was best known for its polos with a leaping tiger as its logo. In its heyday Le Tigre had sales of $200 million and was worn by celebrities including Wilt Chamberlain, LL Cool J and even Ronald Reagan.

But the brand fell out of favor and had been out of production for much of the 1990s. It reemerged in 2005 under former Wall Street executive Ryan O’Sullivan before being purchased by Kenneth Cole in 2007.

At the time of its sale to lnfinity, Franco said he believed Le Tigre “is such a recognized and memorable label which we believe has significant growth potential and licensing opportunities globally.”

There was one hurdle: Le Tigre had an exclusive deal with Bon-Ton Stores to sell the collection. Although he worked with the retailer to reposition the brand, ultimately the two companies decided to amicably part ways in 2017. That allowed Franco to relaunch the label through a “licensing platform.”

In the past two years, Le Tigre has expanded its distribution to more than 700 boutiques in the U.S. and it now generates over $30 million in sales at retail. But Franco has even higher aspirations. “We believe it can be a $300 million to $400 million brand within two years,” he said.

Among the stores that carry the line are Nordstrom, Macy’s, Lord & Taylor, Footaction, Jimmy Jazz and Shoe Palace, as well as a few overseas retailers including Harvey Nichols in the U.K., and specialty stores in Italy, Spain and the Middle East.

He said the brand has seen significant demand in Asia and Europe and Infinity is “in discussions” with potential licensees overseas to further expand its reach.

Its main licensee is Reason Apparel, which Franco said is a small company that focuses on boutiques. “Le Tigre is very meaningful to them so they watch over it closely and that’s what we wanted.”

Reason has created a cohesive collection for the brand that can serve as a halo for lower-priced, classification items down the road.

Franco described the design aesthetic as “retro new.” Think lots of bold colorblocking, exploded graphics and athletic references such as sweatpants and bombers with Le Tigre branding running down the side and T-shirts with large leaping tiger logos on the front. 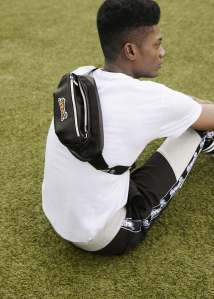 Le Tigre is designed as a cohesive collection.

The brand has licensed American Stitch to produce men’s sweaters for holiday and swimwear for spring. There’s also a new bag license with Fast Forward that will offer fanny packs and backpacks starting next year and the brand is “in discussions” about adding outerwear and hosiery along with women’s wear. A footwear licensee is in Franco’s sights.

Although the brand has not collaborated with any celebrities or influencers, Franco said he would consider it “if it were right. We’ve spoken to some people, but we don’t want to be just another brand.”

Although much of the focus today is on Le Tigre, Infinity has a number of other brands in its stable.

One of its biggest is The Water Company, which sells “sports water” to all the major American sports leagues. The company also has deals with Nickelodeon and Disney to sell co-branded water at their properties.

Infinity also owns XOXO and Bugle Boy as well as Altec Lansing, an electronics and speaker brand that is a rival to Bose and JBL.

Franco’s plan going forward is to relaunch Bugle Boy, which the company has owned since 2000. Although he wouldn’t say exactly when the brand may reemerge, he said it will be “soon.”

“We don’t buy brands to sell them, but to build them,” he said. “The only time we get out is if we feel we’ve maxed out or someone makes us an offer we can’t refuse.”

Franco has spent his entire career in the apparel industry, starting in 1988 by founding the Franco Apparel Group. He grew that company into a leading private label manufacturer and distributor of branded sportswear and children’s wear, and made his mark manufacturing flame-retardant baby clothes in the late 1980s. 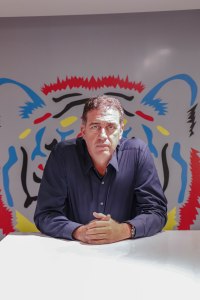 In 1999, the company bought Starter Athletic and rather than trying to compete head to head with Nike and Adidas, repositioned the brand in the mass market “in a place where it could thrive.” The label, which is now owned by Iconix, was sold to Nike in 2004.

It was after buying Starter that Franco decided he’d had enough of the manufacturing end of the business and decided to pivot into brand management. He started that under Franco Apparel before creating Infinity in 2008. Although he held onto Franco Apparel for several years, he finally sold it in 2013 to focus on Infinity, which, according to its web site, has led or has actively participated in brand repositioning ventures that have generated and distributed in excess of $500 million in investor profits over the past decade.

Looking ahead, Franco said he’s always searching for another brand to acquire, although there’s nothing specifically in his sights.

“We look for well-known brands that are in need of new strategies,” he said. “I always have my eyes open and look for opportunities with brands where I feel we can add value. And there are a lot of them out there.”