The designer has been grappling with two medical conditions, and said it was time to step back and focus on her health and her family.

LONDON — Sophie Hulme, who founded a flourishing accessories brand, and who last year relaunched outerwear, is winding down her business with plans to close it as of December, WWD has learned.

The reason isn’t bankruptcy, Brexit or an investor relationship turned sour, but chronic illness. For much of her life, Hulme has been grappling with two debilitating disorders — Kleine-Levin Syndrome and Ehlers-Danlos Syndrome — although she still managed to build a business with revenues of 9 million pounds, a store on Chiltern Street in London and a growing international audience, in China in particular.

Both illnesses have become more difficult to manage, she said in an exclusive interview, and it was time to step back and focus her energies on her health and young family.

Hulme, who is known for her low-key, no-logo leather handbags embellished with gold hardware, and for her statement coats, will make an announcement about the closure on Friday.

“My health was getting worse, especially over the last year, and I’ve been spending less and less time in the office,” said Hulme over a cup of tea at Thomas’ Cafe in Mayfair. “I love my job, but I only feel well enough to be there infrequently, and when the brand has your name on it, it becomes incredibly difficult to allow it to go on without you. The business is growing at the moment and doing well, and I’m happier with the product than I’ve ever been, which makes it all harder. Then, in the same breath, there is a real sense of going out on a high and feeling proud.”

The company’s chief executive officer, Malte Griess-Nega, is currently visiting suppliers and customers, talking to them about the closure plans. The British firm is undertaking a Members Voluntary Liquidation, or MVL, a process for shutting a solvent company, and will continue trading until the end of the year. Hulme said she decided to shut the business rather than sell it, as it’s her name above the door, and she didn’t want to risk handing the company to an investor who could potentially take it in an unexpected direction.

Hulme will be producing two more collections, pre-fall and winter, and issuing a series of limited-edition products for both seasons. As of Friday, 10 percent of the sales from those last two collections will go to charities helping fellow sufferers of Hulme’s rare disorders. The charities are KLS Support UK, and The Ehlers-Danlos Society.

Hulme said she wanted to talk frankly about her conditions in a bid to raise awareness generally, and to help those who may be having symptoms, but who haven’t yet been diagnosed. “I think for people who have it worse than me, for people who don’t have the support, these conditions are very isolating. My family feel very strongly about me raising awareness, and I’m very much open to talking about it.”

People with KLS have bouts of excessive sleep, with each episode lasting days, weeks or months, leaving them dependent on family and carers. EDS refers to a group of connective tissue disorders that can cause a variety of symptoms including debilitating pain, migraines and bleeding. Hulme, a married mother of one, said she is “incapacitated” for an average of three days a week. 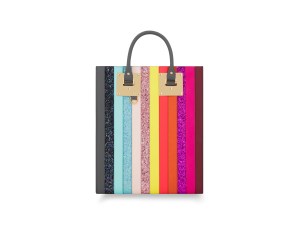 “I’m very aware that people suffer a lot more than me from these conditions, there are people in wheelchairs, and I think these things should be talked about a little more openly, especially in an environment where women are expected to have it all,” she said. “Some people just can’t, and I think it’s important that there’s no shame in it, even in an image-driven industry like fashion. But I do think I’ve been lucky to work in an industry where I can start my own thing, which means I can create the flexibility of when to work, because I would not have been able to work 9-to-5.”

Hulme, who owns the brand’s intellectual property and designs, founded the company in 2008 as an outerwear label, launching accessories in 2011. She put the focus on the latter after the business took off unexpectedly with styles including the Albion, a leather shopper with signature square gold-plated hardware.

Hulme was also a pioneer in the now-crowded contemporary accessories market, selling her no-logo leather bags at prices well below those of the big luxury brands, but higher, and with better quality, than the high street. Her collections sell at stores including Matchesfashion.com, Galeries Lafayette and Ssense Canada. The brand also has a Chinese subsidiary that operates direct-to-consumer sites on Tmall, WeChat, and Secoo.

She said she relaunched her collection of coats because she believes there is a similar niche that needs filling.

In addition to plying her spare and elegant no-logo aesthetic, Hulme has been a longtime supporter of sustainable business practices. Her former pop-up shop at Burlington Arcade in London was designed by Hulme and her husband Edward Swift, an architect. It featured furniture made from a sustainable material consisting of recycled denim and cotton, and sourced from the Kvadrat textile studio. The set up was easy to dismantle, recycle and reuse, reflecting a responsible design approach. 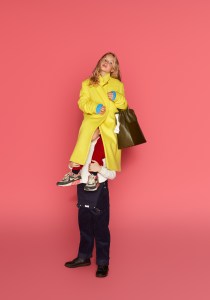 The Chiltern Street store, which will shut later this year, is filled with natural, long-lasting materials such as cork, antique tiles and stone and has a more domestic feel. It was also designed by the husband-and-wife team.

Although Hulme is disappointed about having to shut the business, she said she’s already looking to the future, to improved health and spending more time with her husband and son, who is 18 months old. She said she would consider consulting and working on small projects once she begins to recover.

“I know I’ve had to really push myself to do certain things, but ultimately I just can’t anymore and I’ve kind of come to terms with that, and actually that’s OK. I love designing and making things, and I’m never going to stop doing that. What’s lovely about having built this network of different people and stores is that I can do the odd, small project and sell it to an interesting store. I’d love to work with my husband one day, too,” said Hulme.