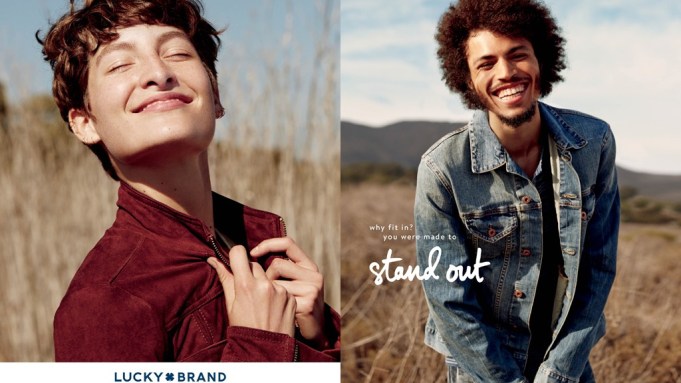 “This isn’t dissimilar to many of the cases of brands that were relevant and there was significant awareness, but the relevance had been lost,” he told WWD in a recent interview after finishing his first eight months as chairman and chief executive officer of the company. “If you’ve still got the awareness — and we do — it’s easier to bring the relevance back, particularly through a superior product offering, than it is to start from scratch.”

While he acknowledges the difficult conditions facing everyone in the denim market, he sees multiple opportunities for expansion — through brand extensions; greater emphasis on e-commerce; better, more productive stores; a new approach to marketing urging customers to “stand out,” and ultimately international growth — and he’s comfortable with what he’s inherited.

He noted that the “four pillars” put in place by founders Barry Perlman and Gene Montesano 24 years ago still define the personality of the brand — motocross and motorcycle, the casual southern California lifestyle, rock ’n’ roll and vintage Americana. “All those concepts are still relevant today,” he said.

But the job won’t be simple. “Denim has contracted over the last few years,” Alberini said. “While our overall comps have been positive, the denim piece has been down for more than a year and we’ve been compensating with our development in other categories. Denim has always been a high-margin business, but there’s been erosion there. It’s become highly promotional.”

In December, Lucky became the last of the brands sold by Fifth & Pacific Cos., formerly Liz Claiborne Inc., as it whittled down its portfolio and became Kate Spade & Co. Leonard Green & Partners picked Lucky up for $140 million in cash and a three-year note for $85 million and didn’t wait for the deal to close before going after Alberini.

A veteran of companies including Footstar and The Bon-Ton Stores Inc., Alberini is generally credited as the architect of Guess Inc.’s transformation from a wholesale-only model into a higher-margin business deriving much of its revenue from its own retail operations and those of licensees and franchisees. He spent 10 years as president and chief operating officer of Guess before departing in May 2010 to become co-ceo of Restoration Hardware, the Corte Madera, Calif.-based home goods retailer that last year saw revenues increase 30 percent to $1.55 billion and a prior-year loss move to an $18.2 million profit.

Alberini was approached by Leonard Green early enough to participate in due diligence and become what he called a “significant investor” in the acquired company. It didn’t hurt that he was keen on a chance to return to the fashion world and he and his wife Andrea were very open to the idea of a return to Southern California from the Bay Area.

As he studied the firm, he immediately liked its female-male balance, with roughly a 3-to-2 ratio of women’s to men’s; denim/nondenim balance (about 50-50), and high brand awareness across both genders. Aided awareness among women was 77 percent and among men 58 percent. Unaided awareness was 10 and 8 percent, respectively. Although Lucky skews a bit older than many of the sub-premium and premium brands, it’s also skewed lower in price.

“We feel we’re in a very unique space — we call it ‘accessible premium’ — in terms of price. A lot of customers have abandoned the brands that are north of $250 at retail and those brands can’t meet us where we live, at $99 to $149. We’re keeping those price points to protect our share, but we’ve got a lot of initiatives to take the business further.”

Chief among these is product. Lucky recently hired Kin Ying Lee — a veteran of the J. Crew Group and Abercrombie & Fitch Co. organizations — as chief creative officer and moved Michael Griffin into the new post of chief product officer, overseeing both brick-and-mortar and e-commerce operations, which previously had been housed in separate silos of the organization, as well as merchandising, sourcing, allocation and creative. Already, the consolidation of online and off-line retail operations has helped bring more coordination and consistency to pricing in the two channels, according to the ceo, as has the recent arrival of David Chiovetti, an alumnus of Guess and True Religion, as senior vice president of retail with responsibility for specialty and outlet stores, real estate, store design, construction and visual merchandising.

Lee and Griffin report to Alberini, as does Nigel Kershaw, the new chief financial officer and another Guess veteran, and chief information officer Jason Richard.

The older age of the Lucky customer provides what the ceo sees as opportunities to build on its base of young customers with several new fits and the expansion of the product line to include not just handbags, added before the acquisition, but categories such as shoes, jewelry, belts and hats. At the same time, other companies in the market have been sold in part or total in the last few years — True Religion, J Brand, NYDJ, Paige, Hudson and Buffalo David Bitton — and, like Lucky and others in the denim space, are looking to expand into additional categories and in some cases distribution channels.

That’s made the setting of clear priorities a priority in and of itself. “We have more limited resources than, say, J Brand has with Fast Retailing. We’re allocating them based on what’s likely to produce the best returns. Some ideas will be delayed and others will need to be approached with a fair amount of testing.”

Alberini made it clear that Leonard Green hardly acquired an ailing business. Sales in the nine months through September 2013 were $324.2 million, the last figures reported by Fifth & Pacific, and 2013 volume landed at about $520 million, according to the ceo.

“Business is tracking much stronger than what I’m seeing in the marketplace,” Alberini said, with year-to-date sales, despite declines in denim, up about 5 percent and third-quarter comparable sales up “over 12 percent” on top of an 8.5 percent gain in the second quarter. With nearly half its business in products other than jeans, it also has a degree of insulation from that category’s recent difficulties.

And its business — nearly two-thirds of it — is built on its own stores, with e-commerce representing less than one-fifth of the retail total. With 170 full-price and 74 outlet stores, Lucky’s retail fleet is sizable, but, generating about $460 a square foot, less productive than the ceo feels it should be, a concern Alberini shares with Lucky’s former overseer, now departed Fifth & Pacific ceo Bill McComb.

“Even at that level of productivity, we don’t lose money in many stores,” Alberini said, “but we see a lot of opportunity to bring productivity up to the $700 range and we know we will get there, although it will take some time.”

To improve conversion at a time of depressed traffic, Lucky has beefed up its assortment and reduced clutter. In its Century City store not far from its Los Angeles headquarters, the company got rid of mannequins, reduced the amount of space devoted to cash wrap stations and installed a denim bar in the center of the store.

“This opened things up a lot,” Alberini said. “And considering a lot of our customers shop with their spouses or significant others, we decided to add sitting areas at many locations. And we threw some product out. We thought the stores were a bit crowded.”

Alberini is holding off on projecting plans for store growth, saying that more units will have to wait until the product line has been expanded and fine-tuned. “Who knows?” he said. “In time, we may need something larger than our 2,500-square-foot box, especially if we add to the product line in the ways we’re planning.” Future stores are likely to range in size from 4,000 to 5,000 square feet, and possibly as much as 5,900 square feet. Renovated stores and those planned for the future will involve considerable incorporation of digital selling tools, too.

While it has franchise relationships in South Africa, Dubai, Panama and Indonesia, he said, international expansion possibilities abound. “Europe and Asia are still untouched and I don’t think we’ve even scratched the surface with our wholesale relationships in the U.S.,” which include Macy’s, Nordstrom and Dillard’s.

While the attractive retail targets haven’t changed much since Alberini’s days at Guess, the means of communication and promotion have, and Lucky is looking to meet the challenges of new media and new messaging with a marketing campaign just hitting publications and the Web. Matt Berman, vice president and creative director, and his team assembled more than 100 people, including fashion and music names, like model Sigrid Agren and Gordy family scion Ryan Gordy, and trendsetters in other fields to help deliver Lucky’s message — “Why fit in? You were made to stand out.” — through print and social media.

“We’ve got passionate people ranging in age from six to more than 65 and we looked to establish a living, breathing campaign of real people and putting their individual spins on a brand for everyone rather than just the ordinary kind of aspirational ads,” Berman said. Working with the Zimmerman agency with still photography by Cass Bird and styling by Melanie Ward, the “Stand Out” campaign incorporates the print and online editions of InStyle, Glamour, People StyleWatch and Elle and the online versions of Vogue and Rolling Stone. The stories of the featured Lucky fans will appear on Lucky’s Web site and on Facebook, Instagram, Twitter and YouTube.

“We’re bringing this brand back in a strong, modern way,” said Berman, who worked with John Kennedy Jr. on the launch of George magazine. “There’s a theme running through the company that things need to be simple and to the point — you can see that in our ads as well as on our shopping bags — but one thing we kept in mind constantly was that today’s customer is crazy for social media.”