What to Watch: Luxury Players Up the Ante in Quest for Sustainability

Stella McCartney's surprise switch of luxury camps seemed to cue up a race for bragging rights in the eco movement.

Forget handbag wars: A new battlefront has opened among luxury rivals — sustainability — and it’s widely perceived as a win-win for the planet and all its inhabitants.

This new game of one-upmanship was sparked last July, when LVMH Moët Hennessey Louis Vuitton revealed a minority investment in Stella McCartney, who had built a reputation as the industry’s pre-eminent eco-conscious designer during a 17-year joint venture with Kering.

Her surprise switch of luxury camps seemed to cue a race for bragging rights in the green movement, and to foreshadow greater efforts among European luxury players to clean up their supply chains.

This movement was front-and-center at last weekend’s G7 meeting in Biarritz, France where a Kering-led group of 32 signed a “fashion pact” geared toward sustainability efforts.

“I don’t see many negatives in a race to become better at producing responsibly, answering the wishes of a new consumer generation, protecting the planet and coming across as being good citizens,” commented Erwan Rambourg, global co-head of consumer and retail research at HSBC Securities.

“Competing for who can be the healthiest and the most exquisite — that’s a great competition,” agreed William McDonough, cofounder of Fashion for Good, a prominent speaker on sustainability, and coauthor of the landmark 2002 book “Cradle to Cradle: Remaking the Way We Make Things.” “How can something be luxury if it destroys the planet or a child’s health?”

Luca Solca, analyst at Bernstein, interpreted LVMH’s Stella investment as “quite a catch-up move: sustainability is front, right and center in this new tie-up.”

The deal made McCartney a special adviser to LVMH chairman and chief executive officer Bernard Arnault and the executive committee members, setting the stage for her to talk about the environment, as reported.

The group’s policy was not to communicate on sustainability efforts, which stretch back 25 years, noted Isabelle Lefort, of Paris Good Fashion, an initiative that aims to push the fashion industry toward adopting more sustainable practices. “Today, with the arrival of Stella Mc Cartney in the group, it is clear that LVMH wants to catch up on communication.” 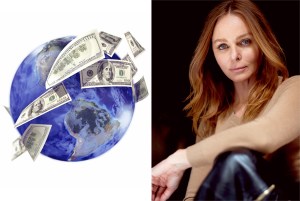 Meanwhile at Kering, “I am sure (ceo) François-Henri Pinault with Marie-Claire Daveu (chief sustainability officer) will continue their offensive policy on sustainable development,” Lefort adding, noting its brand Saint Laurent is “one very particularly invested in the subject.”

Some observers downplayed the rivalry aspect between the two French luxury groups, suggesting a broader sea change is at hand.

“The know-how that Stella McCartney can offer not only LVMH, but the industry at large is hugely important to the sustainably agenda,” said Eva Kruse, ceo of Copenhagen-based Global Fashion Agenda. “It is exciting that groups like LVMH are keen to learn from and be inspired by true pioneers that have blazed trails in sustainability. “

Lefort said “the groups are entering into a vast competition to invent or reinvent their model. LVMH and Kering are leading the way, but they are not the only ones. In Paris, Chanel, Hermès, Richemont and SMCP have largely taken over the subject and act in their own way. New players are emerging in the market.

“Look at the success of Veja, the announcements made by Prada as well as Zara,” she continued.

To be sure, analysts and sustainability advocates anticipate accelerated action — and not only talk — in the second half of the year and beyond.

“Sustainability in the supply chain is the issue today — it’s not about tactics,” said Nina Marenzi, founder and director of The Sustainable Angle, a nonprofit organization in Switzerland that organizes the Future Fabric Expo, billed as the largest dedicated showcase of textiles with a lower environmental impact. “There are natural resource constraints that are determining how businesses will still be able to operate in five to 10 years’ time. Any company that has not addressed how their raw materials needed for their business can be within the planetary boundaries will face serious issues. Supply chains have to shift toward being less water- and energy-consuming, being restorative for the soil, using renewable energy, being free of toxic chemicals.”

Luxury brands continue to invest in raw materials suppliers and factories as a way to secure rare craft skills, and control quality and emissions more tightly. 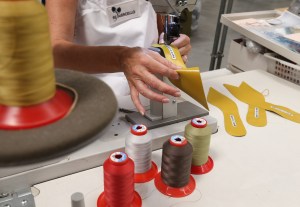 “The best sustainability comes from upstream integration, in my view,” said Solca. “In a similar vein to digital, companies have to make sustainability an integral part of every day’s business processes.”

HSBC’s Rambourg noted that a lot of sustainability and ESG actions and debates to date have been centred on apparel.

“I believe there is a lot to be said and done in other categories — fragrances, spirits, watches, jewelry,” he said in an interview. “The hard luxury players I believe will need to express themselves more clearly on raw materials such as gold and diamonds, especially as for the latter you are seeing the quick emergence of lab-grown substitutes. So focus might shift from soft luxury to hard luxury.”

Rambourg also forecast that investor interest will only intensify. “From an investment perspective, it would be a game-changer if listed companies organized an investor day around environmental, social and governance issues as changes in consumer behavior are now being mirrored by changes in the ways investors look at stocks. ESG matters are now core in consumer and investor decisions alike,” he said.

Lefort noted that in closed-door gatherings with the nearly 30 luxury brands, retailers and other partners within Paris Good Fashion, competitive reflexes are left at the curb.

“There is a climate emergency and a willingness of all to act consciously,” she said. “Trust me, during our meetings, competitors or not all work together to define the best solutions. We all have an interest in eliminating negative behaviors that undermine the sector’s reputation. The more the ethical fashion market develops in this sense, the more it will be buoyant.”

Marenzi agreed: “What we really want to see is how brands can actually contribute positively to people and planet. That will be what really sets a luxury brand apart from the rest.”