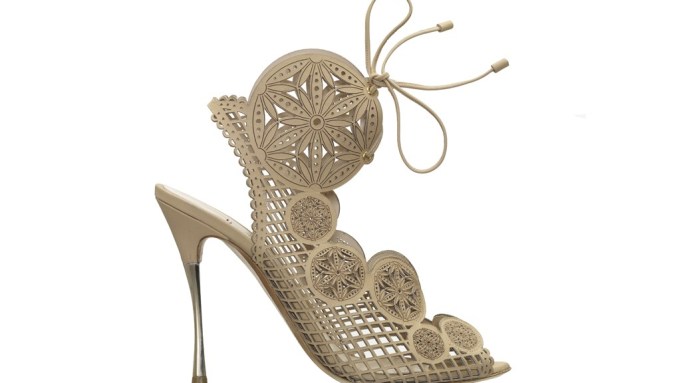 MILAN — Signaling its ambitions in the red-hot women’s footwear category — and perhaps a new proclivity to invest in young designer businesses — LVMH Moët Hennessy Louis Vuitton is to reveal today that it has taken a majority stake in London-based Nicholas Kirkwood.

WWD first reported on March 15 that the French luxury giant was eyeing an investment in the up-and-coming shoe designer.

The exact size of the stake and financial terms could not be learned.

LVMH characterized the deal as a “long-term partnership” that affirmed its commitment to “nurture talent and creativity,” and said it would provide its expertise to help Kirkwood develop his brand internationally.

It is understood LVMH is planning an ambitious retail expansion over the next five years.

At present, Kirkwood’s shoes are carried at about 150 department and specialty stores, and sold in three flagships: in London, New York and Las Vegas.

“I knew a partner would be essential for the next step,” Kirkwood, 33, told WWD Thursday night, shortly after finalizing the transaction.

He said the LVMH pact would help his small company capitalize on its potential, freeing him up to “focus on doing the creative, and really be able to explore new things.”

“I am especially impressed with his commitment to innovation and craftsmanship,” she said. “Throughout our meetings, I was particularly struck by his entrepreneurship and we discovered rapidly that we shared the same vision and beliefs. We want to allow him to further explore the boundaries of his creativity while the brand will benefit from LVMH’s expertise.”

According to sources, Delphine Arnault was instrumental in the acquisition, and has been an important behind-the-scenes scout for the group, capitalizing on her strong rapport with creative talent.

The Kirkwood business is to fall under the LVMH Fashion Group, whose chief executive officer is Pierre-Yves Roussel and whose division comprises brands including Céline, Givenchy, Loewe, Marc Jacobs, Kenzo and Emilio Pucci.

A rising star on the footwear scene, Kirkwood was enlisted by the British Fashion Council to design the branding for the most recent London Fashion Week that wound up at the beginning of this week.

Earlier this year, Kirkwood walked away with the fourth BFC/Vogue Designer Fashion Fund prize, netting him funding of 200,000 pounds, or $320,000 at current exchange, along with mentoring.

Kirkwood, whose longtime business partner Christopher Suarez is to continue as ceo, said their priority would be to fortify management ranks and build the teams necessary to support expansion and its fledgling retail thrust. The company comprises 26 people, plus 12 in retail, and they are “stretched to the max,” he noted.

The designer, who trained at Central Saint Martins and Cordwainers, launched his collection in 2005, and introduced a men’s range earlier this year.

Asked about future product expansion, Kirkwood said, “The next step will probably be handbags, but I have no timelines to do that.”

His sexy heels are regulars on the red carpet, and he has also designed runway shoes for many designers including Erdem Moralioglu, Peter Pilotto and Roksanda Ilincic for their shows earlier this month.

Kirkwood has been the creative director of Pollini, part of the Italian group Aeffe SpA, since 2010, and it is understood he is to honor commitments, while focusing on the development of his signature brand.

Suarez has said the wholesale side of the business has experienced 135 percent growth since 2011. The U.S. accounts for 35 percent of all wholesale business through retailers like Bergdorf Goodman, Neiman Marcus and Barneys New York. The U.K. is the second-largest wholesale market.

The Kirkwood transaction is the latest in a spate of deals between Europe’s luxury giants and promising young designers with small-scale businesses. Earlier this month, Kering bought an estimated 40 percent stake in Joseph Altuzarra, after having taken a majority holding in British designer Christopher Kane in January.

As reported first in WWD on Sept. 11, LVMH has also held talks to possibly invest in another buzzy Londoner, Jonathan Anderson, whose J.W. Anderson label has become one of the hottest tickets in town, according to market sources. A source close to the group insisted it has no “systematic approach” to investments, and the Kirkwood deal “is not earmarked as one of several.”

Still, the development will no doubt prompt other small designer labels to sit up and think about their own potential to attract investment from fashion’s big conglomerates.