McCartney made her debut as Bernard Arnault’s special adviser as LVMH unveiled a series of environmental measures.

“I’m not nervous at all,” the British designer quipped as she took the stage with Antoine Arnault, head of communication and image at LVMH, at the “Future Life” event, where the group revealed it was launching a raw materials sourcing charter for animal products such as fur and leather.

McCartney, who split from French rival Kering last year after a 17-year partnership, revealed in July she had sold a minority stake in her brand to LVMH, which has appointed her as special adviser to its chairman and chief executive officer Bernard Arnault and executive committee members.

Antoine Arnault asked the famously vegan designer, who was making her first appearance at the LVMH headquarters on Avenue Montaigne, whether she was hesitant about joining forces with the group, given that its luxury houses — including Louis Vuitton, Dior, Fendi and Celine — work with fur and leather.

“I’m a firm believer that you have to infiltrate from within,” she replied, to laughter and applause. “And so obviously to be personal adviser on sustainability to Monsieur Arnault, I take as a huge privilege, and the opportunity of really dramatic, impactful change is the most exciting thing that I could ever have dreamt of.”

The designer said growing up on an organic farm with her parents, Paul and Linda McCartney, had prepared her for the most effective part of her job, which is working with suppliers. “I’m excited to bring the solutions that I’ve worked on for maybe 23 years now,” she said.

“I’m not going to pretend that what I do is easy. If it was easy, I think more people would be doing it. But I personally don’t see it as a constraint. I see it as a huge inspiration. You know, we’re having this conversation in a week of climate crisis and the entire world is talking about this, and people are practicing this in their lives, so why shouldn’t they be able to practice it in their place of work?” McCartney asked.

Noting that LVMH launched its environmental division 27 years ago, Bernard Arnault said the group was committed to accelerating its work in the field. “Today, protecting the environment is no longer an option,” he said. “We have to accentuate our leadership on environmental issues. We have the legitimacy to do so.”

By 2025, LVMH will ensure full traceability for animal products, compliance with the most advanced animal welfare standards for 100 percent of raw materials, and a reduction of the environmental impact of the processing of all animal-based materials, it said.

The group also touted its progress on meeting its 2020 targets for reducing carbon dioxide emissions and using renewable energy, saying CO2 emissions fell by 16 percent between 2013 and 2018, even as its revenues increased from 29 billion euros to 47 billion euros.

LVMH is joining a chorus of green initiatives at Paris Fashion Week, where everyone from buzzy young designers to high-end brands, industry federations, tech entrepreneurs and governments officials are vying to take the lead on sustainability issues — starting at the top with French President Emmanuel Macron.

Bernard Arnault sided with Macron in warning that climate activist Greta Thunberg risked discouraging young people with her alarmist world view. After her blistering speech at the U.N. Climate Summit on Monday, Thunberg filed a complaint against five countries, including France, for not doing enough to ward off global warming.

The LVMH chief said while the Swedish teenager was a spokeswoman for her generation and was right to address the urgent issue of climate change, he regretted that she failed to offer any solutions.

“She has an unremittingly pessimistic view of the world, and I think that’s depressing for young people. All she does is criticize,” he said. “I’m impressed by young people with solutions, ambitions and optimism, because at the end of the day, I’m convinced we will get through this.” 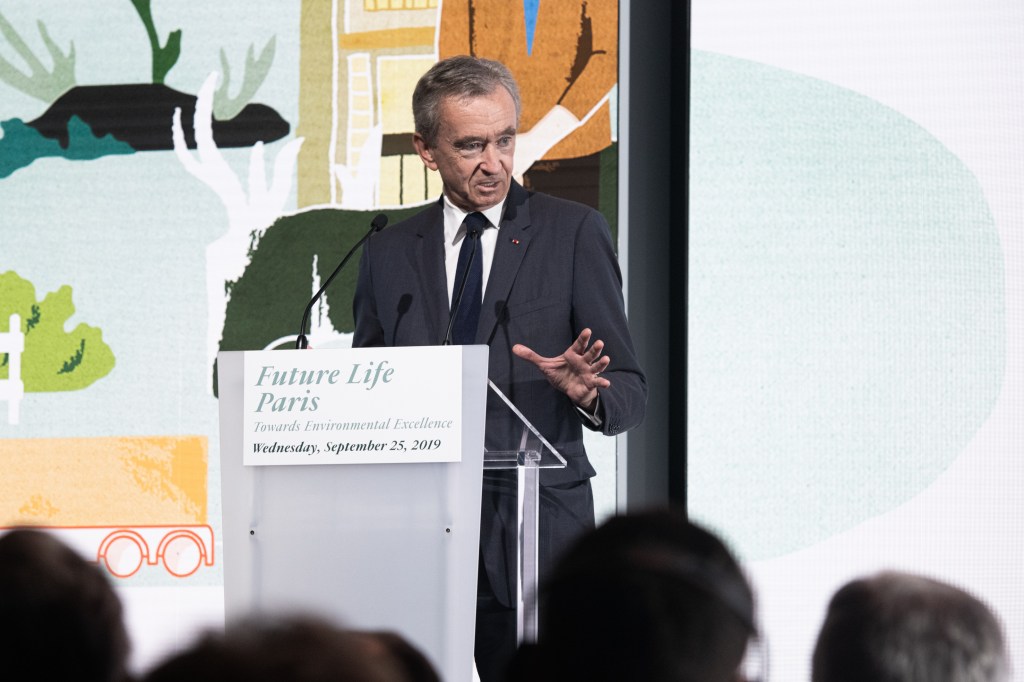 As part of the event spotlighting the achievements and objectives of its LVMH Initiatives for the Environment, or LIFE, program, the group invited the heads of brands including Louis Vuitton, Fendi, Loro Piana, Guerlain, Loewe and Christian Dior Parfums to talk about how they’re helping to protect the environment.

Maria Grazia Chiuri, artistic director of women’s collections at Dior, described her collaboration with the Paris-based landscape and urbanism collective Coloco on the set for her show, held the previous day, which featured 164 trees that will subsequently be replanted in four locations in and around the French capital.

“What makes us at Louis Vuitton very proud is that we participated in the repopulation of the American alligator,” said Michael Burke, chairman and ceo of Louis Vuitton. Laurent Boillot, president and ceo of Guerlain, highlighted its efforts to protect bees. “No bees, no flowers. No flowers, no Guerlain,” he summed up.

LVMH noted that 48 percent of the leather used by its houses is sourced in tanneries certified by the Leather Working Group, a multistakeholder group that aims to promote sustainable environmental business practices within the leather industry. This proportion should rise to 70 percent by the end of 2019, it added.

Its new sourcing charter, which covers fur, leather, exotic leather, wool and feathers, sets out commitments under three pillars: traceability of origin; farming and trapping conditions, and respect for workers, the environment and biodiversity.

The LVMH standard for responsible crocodile leather sourcing, unveiled in February, is also part of the new charter. As part of the project, the group has appointed a scientific committee to assess research and pilot scientific projects.

“We keep a cool head in environmental matters as in other issues. We don’t want to cave in to any short-lived ideologies. Before embarking on an environmental project, we study the scientific rationale for taking action,” said Bernard Arnault.

LVMH said it would likely exceed its targets for 2020, which include using 30 percent renewable energy, and reducing its CO2 emissions by 25 percent compared with 2013.

The group also detailed how it will allot the 10 million euros it pledged toward safeguarding the Amazon rain forest, after images of raging wildfires shocked the public over the summer.

Half the sum will go toward operational assistance to fight fires, and the rest to a special project within the Man & Biosphere partnership between UNESCO and LVMH signed last June, focused on fire management.

The group has signed a strategic partnership with the Solar Impulse Foundation designed to find innovative and efficient clean technologies to combat environmental issues. It will hold a second edition of the “Future Life” event, focused on the U.S. market, in New York City on Oct. 24.

The LVMH event came a day after Kering said the entire group would become carbon-neutral within its own operations and across the entire supply chain. Kering pledged to offset its annual greenhouse gas emissions from 2018.

The group has previously said it is targeting a 50 percent reduction in its carbon emissions by 2025, and in May published new animal welfare standards.

Hermès, meanwhile, expects to become carbon-neutral within its own operations by 2020, its ceo Axel Dumas told reporters earlier this month. “We are a global group in terms of revenues, but our carbon emissions are equivalent to those of a small or medium-sized business,” he said.

All these announcements come as the French Senate is examining a draft law that would prevent companies from destroying unsold clothing, potentially setting new standards that could become a blueprint for the industry. The measure fits into the country’s broader roadmap for a circular economy.

Kering spearheaded the “Fashion Pact,” signed by 32 companies and presented by its ceo, François-Henri Pinault, in August at the G7 Summit in Biarritz, France, pledging to eliminate single-use plastics, use renewable energy and promote regenerative agriculture practices, among other commitments.

McCartney is also a signatory, while LVMH declined to sign. Antoine Arnault said it did not make sense for the group to be lumped together with fast-fashion and sportswear brands, especially because its activities extend to areas as diverse as winemaking and hospitality.

“We have nothing against them, but we have nothing in common with Nike, Zara, Gap and H&M,” he said. “We’re not in the habit of signing pieces of paper to ease our conscience. We prefer acts to pacts.”

With consumers ratcheting up the pressure, McCartney exhorted the group’s executives to step up their efforts internally.

“Take pride in making change, because you want to be part of the conversation — you don’t want to be left behind,” she concluded.