The group announced it will stop using herbicides in its Champagne vineyards by the end of this year.

The Moët Hennessy stand at Vinexpo.

Unlike the 2,800 other exhibitors at the first Paris edition of the trade event, the French luxury conglomerate — home to 26 brands in nine countries including Hennessy cognac, Dom Pérignon Champagne, Glenmorangie whiskey, Belvedere vodka and Château d’Yquem wine — was not there to sell anything.

Instead, the imposing stand, made from 100 percent recyclable and responsibly sourced materials such as cork and oak, will be home to three days of debates between representatives of the Moët Hennessy wines and spirits division and outside experts including academics, retailers and environmental activists.

The program, dubbed Living Soils, will tackle issues such as soil protection, climate change, water and energy management, biodiversity, supply chain and packaging. It will conclude with a group discussion with students led by French chef Alain Ducasse, imagining what wines and gastronomy might look like in 2050.

Kicking off the proceedings, Philippe Schaus, chief executive officer of Moët Hennessy, announced that the group would stop using herbicides in its Champagne vineyards by the end of this year. The region as a whole aims to be herbicide-free by 2025, he noted.

Schaus added that LVMH will invest 20 million euros in a research and development center focused on sustainable development solutions, set to open in September in the town of Oiry in Champagne. It also pledged to host annual gatherings for the Living Soils initiative to monitor progress. 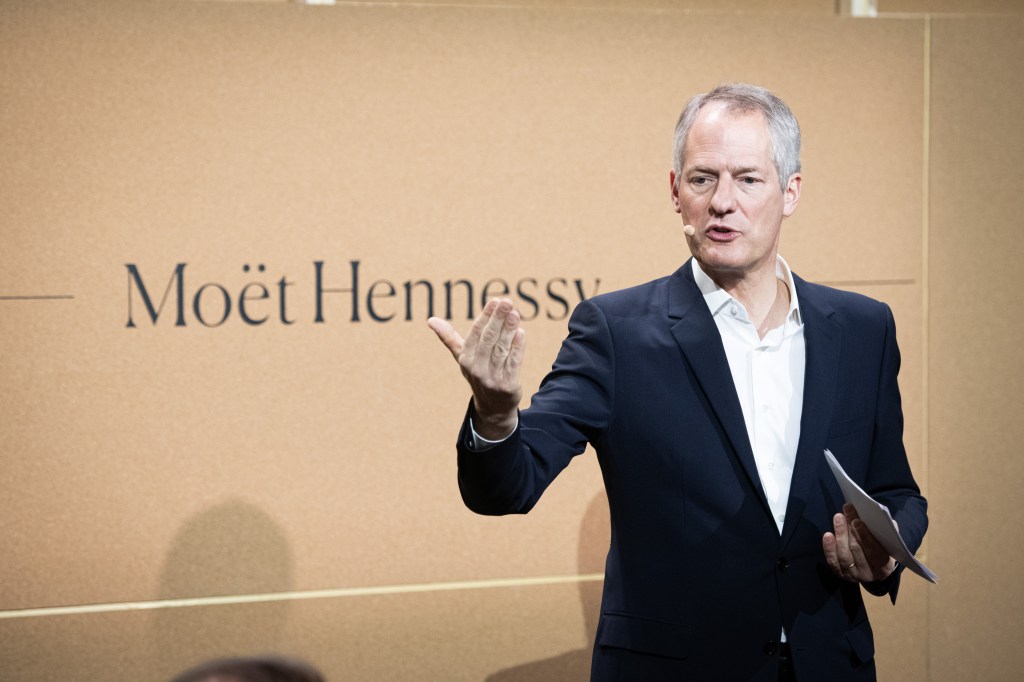 “Obviously, we are all conscious of the fact that these last few years there has been a dramatic evolution in the climate and biodiversity, and this has prompted us to accelerate the initiatives we have launched in recent years,” the executive said.

“To accelerate means to share the knowledge we have acquired and to have open debates, without taboos, about the different solutions for sustainable wine growing in different parts of the planet,” Schaus added.

Asked about the impact of the coronavirus on the key Chinese market, he said it was too early to gauge when the outbreak would peak. “We’re doing everything possible to avoid contributing to the propagation of this epidemic and above all to protect our collaborators,” he said, noting the company has suspended travel in China.

Moët Hennessy employs 500 people in China, including 30 at its Chandon winery in the Ningxia region, and 30 in the Ao Yun vineyard in the Yunnan province near Tibet, according to a spokeswoman for the group.

Schaus was equally circumspect regarding the impact of the 25 percent tariffs imposed by U.S. President Trump on French wines and Scottish whiskies, among other goods, in a battle over subsidiaries to jetliner maker Airbus.

Exports of French wine to the U.S. fell 44 percent in November versus October, French trade minister Jean-Baptiste Lemoyne was reported as saying last week. The tariffs took effect on Oct. 16.

“It’s going to impact volumes, and we will try to survive. We’re looking for alternative markets,” said Schaus, adding that U.S. wine distributors are lobbying the government to get the decision reversed. “They’re doing everything they can to stop these unfair taxes. We’re the collateral damage of another industry.”

Antoine Arnault, head of communications and image at LVMH, said the group’s presence at Vinexpo underlines its growing commitment to sustainable development. He recently took charge of green issues at LVMH, which has named a new environmental development director.

“The idea is to set ourselves apart and to come here not to do business, but on the contrary to debate with others, including our competitors, and come up with ideas together to move forward as smartly and intelligently as possible,” Arnault said.

“I think it’s very important to be humble. We don’t have all the answers, and we’re upfront about it. We’re open to suggestions, but we have to be cautious,” he added. “We must not take any hasty or radical decisions. These are ecosystems and professions that require you to take your time. That’s what we’re here for.”