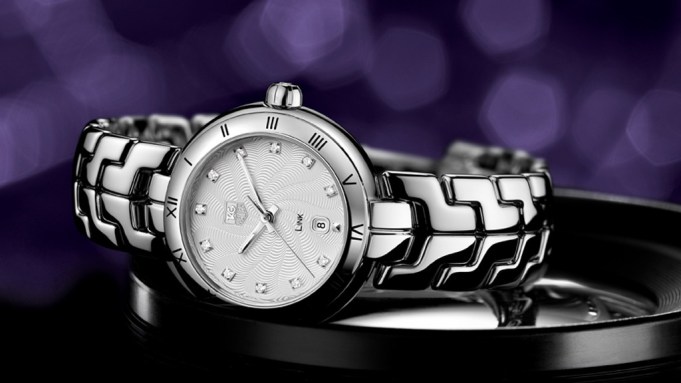 PARIS — Double digits remain the most fashionable numbers in the luxury sector, and LVMH Moët Hennessy Louis Vuitton unfurled a slew of them on Wednesday, headlined by a 25.4 percent jump in first-quarter revenues.

“It’s a great start to the year, which bodes well for the rest of the year. No reason to be pessimistic,” commented chief financial officer Jean-Jacques Guiony, noting that sales advanced by double digits in local currencies across all regions and adding, “I don’t think that happens very often.”

Sales gained 17 percent in Asia; 16 percent in the U.S., excluding Hawaii; 12 percent in Japan, which is rebounding faster than expected after last year’s earthquake and tsunami, and 10 percent in Europe, despite the drag of troubled economies in Italy, Spain and Greece.

Perfumes and cosmetics was the only business group stuck in single-digit territory, posting an organic gain of 9 percent (although like-for-like sales at Sephora in the U.S. rose 14 percent).

Stripping out the impact of currency and acquisitions, revenues at the French luxury giant — maker of, among other brands, Veuve Clicquot Champagne, Guerlain lipsticks and Givenchy fashions — grew 18 percent in selective retailing, 17 percent in watches and jewelry, 16 percent in wines and spirits and 12 percent in fashion and leather goods.

For the group as a whole, the increase in organic terms stood at 14 percent, with revenues totaling 6.58 billion euros, or $8.63 billion. That represents an acceleration from the fourth quarter, when organic growth tallied 12 percent.

Dollar figures are converted from euros at average exchange rates for the periods to which they refer.

LVMH credited strong Asian tourist flows for girding the numbers. Guiony said “big price differentials,” ranging from 30 to 47 percent and due to currency fluctuations, helped shift some of the business from Asia to Europe in the quarter.

Tourists account for roughly half of Vuitton’s business in Europe, he noted.

In a research note issued Monday, Citi forecast a smooth ride ahead for luxury players, despite skittish stock markets and a rocky economic outlook.

“Significantly, [the 2011 growth] was achieved in the context of deteriorating economic conditions in Europe-Asia and successive shocks (Arab Spring, Japan earthquake, oil price [and] market sell off),” the note said. “The ‘new normal’ and dire economic growth prospects in the West did not affect high-end discretionary consumption in debt-laden developed economies, as many commentators had predicted.”

At LVMH, surging Asian tourism also fueled sales at DFS, particularly at its Gallerias in Hong Kong, Macau and Singapore — magnets for wealthy Chinese from the Mainland.

In fashion and leather goods, the company noted that Vuitton “continued its progress,” that Fendi had a “good start” to the year, and that Celine “in particular recorded strong revenue growth due to the success of its collections.”

At Vuitton, new colors in the Epi line, and the mainstay Monogram and Damier collections, underscored its double-digit momentum.

Pointing to an uncertain economic environment in Europe, LVMH gave no specific sales or profits guidance other than to increase its “leadership of the global high-quality products market.”

First-quarter sales at the Dior fashion house vaulted 29 percent to 284 million euros, or $372.2 million. At constant exchange rates, the increase stood at 24 percent.

Dior trumpeted “record” revenue growth in its retail network of 35 percent at constant exchange rates, reflecting what the company described as “positive momentum in Europe, America and Asia.”