Madona's fashion line launch for Macy's includes a marketing blitz that rivals the introduction of a new album or tour. 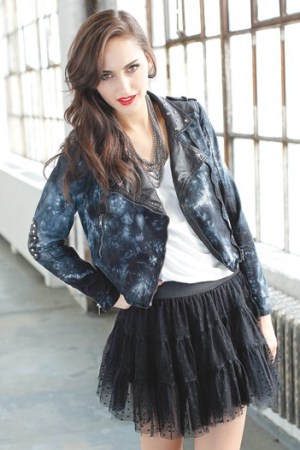 Upsides of Upcycling: ‘It Is a Creative Process’

Madonna is getting set to move into a new home — Macy’s.

The world’s biggest pop star is gearing up for the launch of her new fashion line, Material Girl, in 200 Macy’s doors on Aug. 3. And this being Madonna, the road leading up to the launch includes a marketing blitz that rivals the introduction of a new album or tour: a celebrity face for the brand — a teen actress who will remain anonymous until next month; the debut this week of a personal blog from Lourdes Leon, Madonna’s daughter, who has been closely involved in the development of the junior line, and a consumer texting sweepstakes to meet Madonna and Leon at a Sept. 22 event at Macy’s Herald Square in New York to mark the launch.

“I like the idea that the line is being sold at Macy’s because Macy’s has the major accessibility factor across America,” said Madonna of Material Girl, which is the first project from MG Icon, a joint venture among Madonna; her manager, Guy Oseary, and Iconix Brand Group Inc.

And no matter how well the line performs at retail, Madonna and Oseary already have made a pretty penny of it: Iconix paid them $20 million, plus potential earn-outs, for its 50 percent interest in MG Icon, according to a filing with the Securities and Exchange Commission.

Speaking of the design and merchandising strategy behind the first deliveries of the new line, Madonna said: “It’s not complicated. It’s dressing in layers. It’s not looking like you took too much time thinking about what you’re wearing.”

The Material Girl collection includes apparel, footwear, handbags, jewelry and hair accessories, with most items retailing for between $12 and $40. The initiative is part of a Macy’s effort to win some of the fast-fashion dollars that teens and young adults have been pouring into vertical retailers such as H&M, Forever 21 and Zara.

Madonna fans will be able to equate many of the designs with some of the singer’s most memorable looks. There are lots of lace tops and tulle skirts that recall the “Like a Virgin” or “Desperately Seeking Susan” periods contrasted with military styles that Madonna devotees might associate with the “American Life” album. Bustier tops hearken back to the iconic “Express Yourself” video and the seminal “Blonde Ambition” concert tour, while fitted plaid shirts would have been right at home in the “Don’t Tell Me” cowboy dance number. Looking for the “Papa Don’t Preach” look? There’s a leather jacket, jeans and striped top that could pass muster.

However, the collection isn’t a retrospective of Madonna’s greatest fashion hits, insisted Lanie List, executive vice president of merchandising at Iconix Brand Group. “The collection is a nod to the original Material Girl look, but Lola [Leon’s nickname] is part and parcel of making it relevant to today,” she explained. “Madonna put all these trends out into the marketplace at the time, but the important thing was to update everything for today’s consumer. Madonna and Lola didn’t want this to look like a museum.”

In that spirit, fast-fashion aficionados will find cabbage rose-print dresses, slinky bandeaux, cute blazers, tomboy cargo shorts, skinny denim, drapy oversize knits and lots of leggings in stripes and patterns. Special “wow” items include a studded leather jacket and a crinoline dress with a built-in bustier, which retail for up to $80.

Footwear includes ballet flats in snake or floral prints, boyish Oxfords and some tough-girl combat boots. Jewelry is on trend with mixed-media necklaces and bracelets in fake pearls and ribbons or dangling multistrand metal chains — which easily could have been inspired by Madonna’s “Lucky Star” accessories.

Everyone involved in the project at Macy’s and Iconix emphasized the extent of Leon’s contribution to Material Girl — although the 13-year-old was probably at least somewhat occupied with schoolwork during its development period over the past year. Leon is a key element to the brand’s image, as Madonna herself, at age 51, is closer to the Chico’s demographic than the Material Girl target of teens and young adults.

“She’s been coming to meetings pretty much from the very beginning,” said Madonna of her fashion-loving daughter. “My role was really to make sure we were all going in the right direction and it was a line that I could stand behind and be proud of and feel good about — and one that she could also feel represented her. I really like the way Lola dresses, and I think this line is absolutely an extension of her taste.”

Jeff Gennette, chief merchandising officer at Macy’s Inc., noted, “One of the more interesting moments of my career has been watching Madonna and Lourdes work together. Lourdes is a real tastemaker and has a really defined point of view. They bounce ideas off of each other, and what was interesting was the designer references they bring to each other. Lourdes would bring in a hat that Madonna wore on tour three years ago. It’s been a great design process.”

To reach its youthful demographic, the Material Girl marketing campaign includes a heavy digital element, with a dedicated site at materialgirlcollection.com — which hosts a blog written by Leon — along with the requisite Facebook and Twitter accounts (Twitter handle: MaterialGirlCol). Leon’s blog went live Tuesday with her musings: “I’m 13 and I’ll be 14 in October, so I can’t wait for that because I am FINALLY allowed to dye my hair…THANK YOU MOTHER!! My favvvv color is black (just because it goes with everything) and my least favorite color is brown (because it resembles the color of something QUITE gross). I am totally obsessivo about 80’s shorts…You know the kind that makes your butt look kinda big, with a grunge-looking shirt tucked in. It’s kinda nerdy but I love it.”

In another nod to the juniors audience, Madonna is not the centerpiece of the marketing campaign supporting the launch. Rather, the most visible face of the brand in advertising and marketing materials will be the for-now-anonymous young television actress and singer (hint: she’s on a hit teen drama series and is known for her frayed, rocker-tinged style off-screen). She appears mostly hidden from view in teaser ads that break this week in celebrity weeklies, cinema, outdoors in New York and San Francisco and on the Macy’s Herald Square JumboTron. Her identity will be revealed in the coming weeks closer to the launch date.

“Madonna handpicked this girl,” said Dari Marder, chief marketing officer at Iconix. “She really embodies who the Material Girl is.”

New advertising with the unveiled actress will break at the end of July in celebrity weeklies and the September issues of fashion titles such as Teen Vogue, Seventeen, Cosmopolitan, Glamour, InStyle, Nylon and Paper. The campaign also will include cinema spots, outdoor, radio and online components.

All the campaign images were photographed last month in a studio and on the streets of Williamsburg, Brooklyn. “Lola helped style the shoot and Madonna stepped in and photographed some of the pictures herself,” revealed Marder.

The celebrity face of Material Girl will attend the national retail launch of the line at Herald Square on Aug. 3, standing in for Madonna and Leon, who will not be present.

Major deliveries of Material Girl product will occur monthly at Macy’s, but fresh merchandise will be filtered in on a weekly basis to the selling floor. Gennette and List emphasized the line will be item driven rather than merchandised as a collection. Each delivery will feature several “opinion-maker” items, or a key style in a number of colorways at an extremely sharp price — such as a $5 tube top or a $15 body-contour dress.

“These are items that work back to a lot of different items that will create real buzz with shoppers,” explained Gennette. “This is a fast-fashion model for us. What doesn’t work is going to be marked down very quickly. Our turn will be much faster than usual. We’ve studied our competitors in this market very closely. We want constant newness and very competitive pricing.”

The biggest presentations of Material Girl will be at the Macy’s stores in Herald Square, State Street in Chicago, Union Square in San Francisco, South Coast Plaza in Orange County and Dadeland in Miami. Another 75 stores will have significantly sized shops, with the remaining 120 showcasing a more moderate assortment.