According to buyers shopping the opening day of the trade shows, budgets have increased modestly and the mood is upbeat. 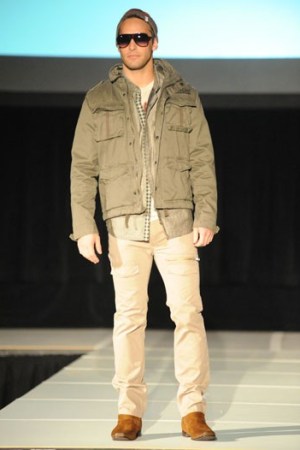 LAS VEGAS — Retailers are beginning to feel the love from consumers.

Despite concerns about price increases and continued economic- and weather-related issues, stores are hopeful the recession will fade from memory as 2011 sales continue to rebound.

According to buyers shopping the opening day of the trade shows here, budgets have increased modestly and the mood is upbeat.

“Men are not just looking to replace, but to add,” said Durand Guion, vice president and men’s fashion director for Macy’s. “What was caution six months ago has turned into great performance and we’re super-focused on maintaining and building on that. The challenge for us is to get away from QR [quick response] and replenishment and make sure we inject the right amount of newness to keep them engaged.”

And there are plenty of fashion trends in the market for fall to lure shoppers. In men’s, that includes slim-fitting suits and dress shirts, military influences, heritage and Americana, nondenim bottoms, fashion knits, patterns including stripes and plaids, Fair Isle sweaters and leather outerwear, according to Tim Bess, men’s fashion trend analyst for the Doneger Group.

Retailers attending Doneger’s opening-day trend forecasting session said business has continued to strengthen and they’re expecting that to continue as the year progresses.

David Zant, executive vice president and general merchandise manager of men’s for Belk Inc., said the chain “had a great January and we’re off to a good start in February. We’re feeling good right now.”

At the shows, Zant said Belk is “looking to modernize our assortment and be more updated” to complement “our very strong traditional business.” Zant said the company has experienced good success with more-modern suit separates, fitted dress shirts and narrower ties. “But in sportswear, we’re nowhere near as penetrated, so there’s an opportunity there.”

Conrad Szymanski, president of Bealls Outlets, also reported that “things are getting better,” although “young men’s is better than men’s. It’s very brand-driven and fashion-driven and has been a bright spot.” Among the items moving in young men’s are screen T-shirts, fashion denim and cargo shorts; surf-skate is also resurging.

“There are a lot of positive signs out there, like the improvement in the economy,” he said. “The only storm cloud is the price increases raining down on us. The particular challenge is with cotton prices. How do you move the customer from paying $14.99 to $17.99? We’ll see. But the customer wants newness” and if retailers provide that, the price hikes will be less offensive, he said.

Macy’s Guion said the company is “laser-focused on the price-value relationship. There are going to be price increases, but it’s across the board,” he said. “But they’re not that severe that they’ll take people out of the game. If they’re up 5 percent, it’s not terrible if the product is right.”

Guion said he was banking on several strong trends, including military influences and the evolution of camouflage colors. Nondenim bottoms; leather and “pleather” in gray, burgundy and other colors; varsity and collegiate looks, and textures such as Sherpa and shearlings are expected to fit that bill.

On the women’s end, Ken Petersen, founder and chief executive officer of the Vacaville, Calif.-based Country Visions Inc., a franchise company that is expanding a chain of Apricot Lane stores from 39 units to 60 this year, described his attitude toward growth this year as “bullish.” Last year, he said Apricot Lane registered a same-store sales increase of 4.5 percent.

Karen Delaney, district buyer for four Apricot Lane stores in the Dallas-Fort Worth area, estimated fall merchandise orders this year would be 10 percent above last year. Dresses are taking up a slightly larger portion of the order, she said, while denim, which covers 25 percent to 45 percent of the floor space and sells from $88 to $300-plus at retail, will remain consistent.

Apricot Lane is experiencing overall sales growth despite customers spending less, according to Petersen. He said the average sale per customer has slumped from $80 to $75 in December, January and February, and he reasoned that lower-priced Christmas gifting items and customer frugality that hasn’t fully subsided since the onset of the recession are responsible for the decrease.

Customer tight-fistedness underscores the need for retailers to keep prices down. Petersen has listened to vendors grumble about rising cotton costs, but he’s been able to hold off price hikes so far. “Our consumer won’t feel any increase in prices across the chain,” said Petersen.

Jerri Ulves, vice president, general merchandise manager for Santa Fe Springs, Calif.-based Styles for Less Inc., a women’s clothing retailer with 125 doors, was drawn to bohemian-looking tops with floral and tribal prints, and dresses in maxi and tube silhouettes. “Last year, skirts were so tremendous. Even though skirts are still important, I think dresses will be more so this year,” she said.

Michele Crawbuck, divisional merchandise manager, intimates, at Onestopplus.com, the Redcats USA-owned plus-size resource that includes Woman Within, Roaman’s and Jessica London, is less concerned about price point. She said she’s looking to bring in national lingerie brands that tend to be above the $9.99 to $39.99 range of Onestopplus.com’s proprietary brands. “The customer will spend anything on a bra or an undergarment if she knows the brand, and she knows it is going to make her feel good,” said Crawbuck.

Strong demand for plus-size lingerie has convinced Crawbuck that Onestopplus.com can reach broader audiences, and it is planning to double its assortment by the fourth quarter of next year. “The last three years, our business has been very, very successful. We pulled out the year [2010] with a double-digit increase, and I definitely see 2011 [doing the same],” said Crawbuck.