Located in Lliçà D’Amunt, a 30-minute-ride from Barcelona, the facility can handle as many as 75,000 garments per hour.

The facility, located a 30-minute drive from Barcelona, was completed in 2016 but became fully operational last summer. It is equipped with advanced technologies and robot machines occupying the clean and airy space filled with natural light. Although it employs around 600 workers, passing through the highly automatized premises, you’re left with the impression that robots take center stage, as around 400 operations are machine-driven.

Mango invested 232 million euros for the state-of-the-art building covering 2 million square feet, and it pledges to allocate an additional 35 million euros to expand the plant’s area by 968,750 square feet. The new portion of the building will be unveiled in 2023, increasing the site’s shipment capacity.

The facility handles items incoming from Mango’s 1,200 global suppliers and redirect them to the network of 2,100 stores in 110 countries and to the group’s e-commerce warehouses. It can stock up to 7 million hung garments and 20 million folded garments and accessories at the same time.

Once the facility’s extension is complete, Mango expects that the site will process 300 million fashion items per year. Business in other logistics centers, including the ones in Mexico, China, Russia and Germany, will keep operating, explained Antonio Pascual, head of the company’s supply chain.

“We certainly have a cost reduction with this [automatized] center, but it’s also about the efficiency and enhanced service we can continue providing to our clients,” Pascual noted.

The logistics plant is organized around two different operational lines, dedicated to hung clothes and folded garments, and accessories, respectively. The former line handles 15,000 garments per hour while the latter can process 9,900 boxes per hour, or around 60,000 folded garments. Both lines, located on the two opposite sides of the facility, feature temporary warehouse spaces where items can be stocked for up to four to five weeks.

Additional short-term storage areas, called “dynamic buffer” and “stingray,” collect items that leave the facility in a few days and which are selected according to predictive models and data analysis systems, carried out by the integrated Warehouse Management System. 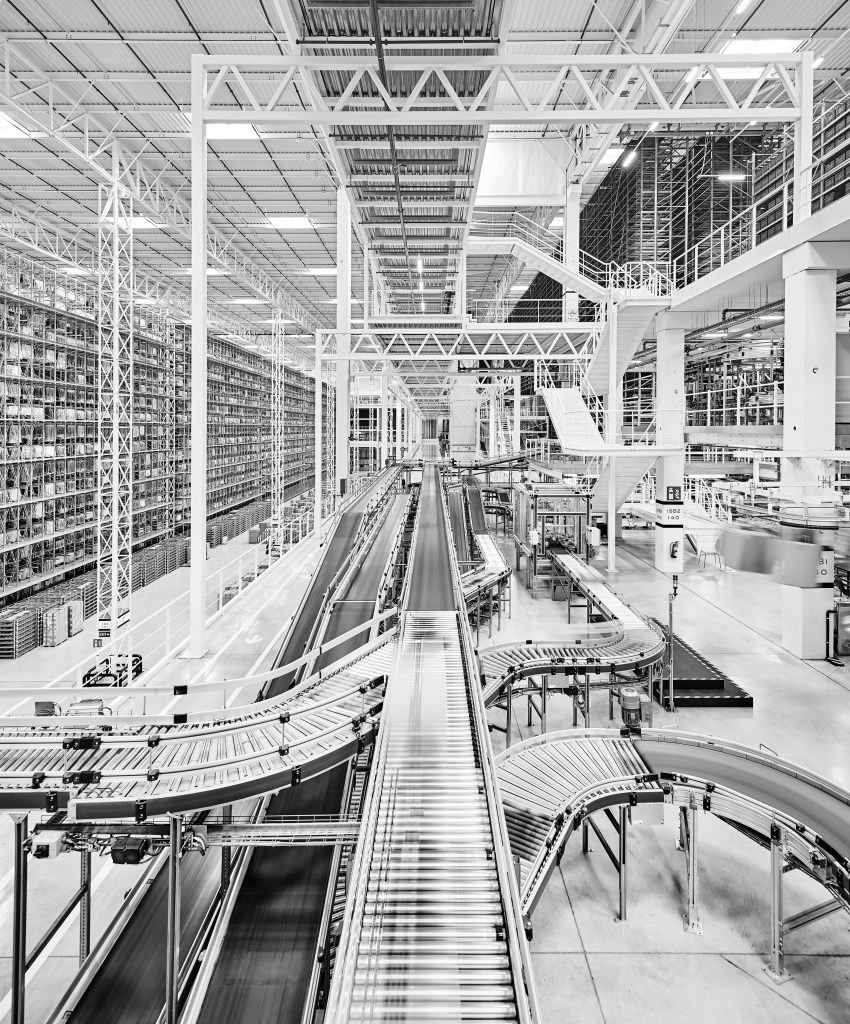 Human skills are put front and center when it comes to quality-check and sensitive processes, such as filling the boxes before they are shipped out to the company’s retail network and to the main e-commerce warehouse located at the firm’s headquarters in Palau-solità i Plegamans, which serves 79 countries.

Reflecting the fashion industry’s ongoing commitment to sustainability, the company highlighted that 40 percent of the boxes it receives from its suppliers are recycled at the logistics center and it expects to double that figure in a few years. Additionally, Mango’s general manager Toni Ruiz said the company is “discussing with suppliers so that we can replace the plastic-wrapping and by the end of the year or in early 2020 we expect to debut a new wrapping material,” he said.

The automatized plant’s project is part of a broader plan to enhance the company’s digital capabilities and services. Ruiz acknowledged that the company “has lagged behind our competitors” but was confident it will be able to catch up.

The executive reiterated that “although in the last three years sales did not grow, Mango saw a turnaround in 2018 with revenues starting to pick up again, and we really stand by our business plan.” He declined to forecast sales figures for 2019, noting the next six weeks will be “super important.” In 2018 Mango reported revenues of 2.23 billion euros.

“We realized five years ago that our sector was changing, so in the past three years we underwent a transformation of the company not only in retail, but also in logistics and operations,” he added.

Talking to WWD, Ruiz underscored “the most important thing is our product, its positioning and design and having a DNA that differentiates us from any other competitor. We’re investing a lot because we think this is the main asset…and we’re really focused on this data-driven kind of organization, which is also culturally a different way of doing things. We have plans to change our organization because I think it’s the way to compete in the future.”

Ruiz noted he sees “great potential” in Europe, Turkey and Russia, accounting for 70 percent of the business. China and the U.S. are also top priorities for the executive, although with different perspectives, as he described the former country as “online-driven” while the latter more a combination of physical retail and online commerce.

“We have a customer view, rather than a channel view, that’s why we’re trying to understand the behavior of our customers,” echoed Guillermo Corominas Palomar, Mango’s director of customer and institutional relations.

The online business is expected to account for 23 percent of the company’s sales in 2019, up from 20 percent in 2018 and 15.5 percent in 2017. The efficiency of the new Mango logistics was pivotal in spearheading the channel’s growth, according to Ruiz.

“This logistics gives us the ability to do all the operations in the same place, sustaining growth for the next decade,” Pascual underscored. “It’s not just about loading more trucks but being able to maintain that level of service.” 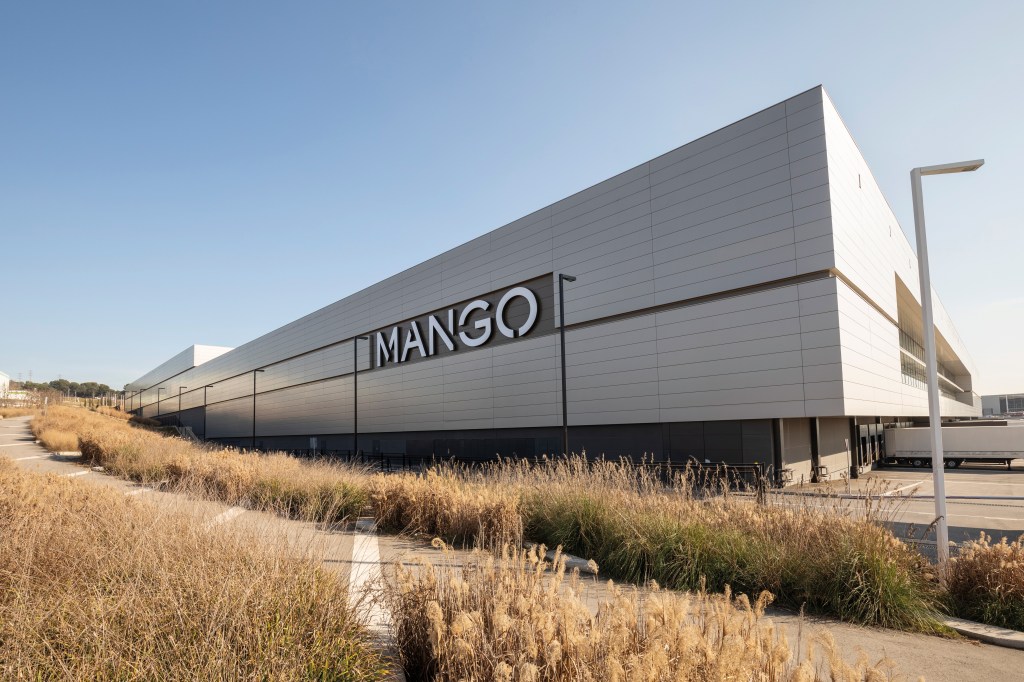 To this end, last April the Spanish firm opened the doors of its Digital Innovation Center in Barcelona’s 22@ district, where it pledges to employ as much as 100 people covering different digital-oriented tasks, including digital marketing, digital product design and data analysis, with the goal to enhance its customers’ experience through omnichannel initiatives, including a loyalty program it kicked off this year in Spain and France.

Also improving the customer experience in-store, Mango started to renovate its network of directly operated stores and franchises in 2013 by kicking off the “megastore” concept, opening large-scale units.

In 2019, the Spanish brand added 645,834 square feet of retail space reflecting the “Line” concept, which unites all of Mango’s collections for men, women and kids under one technology-enhanced roof. Mango has invested 600 million euros since 2013 in the project, and Ruiz said that in 2020, the concept will be rolled out to five to six additional doors, mainly in Europe and the Middle East, amping up the firm’s footprint by 322,917 square feet to 430,556 square feet.

After renovating its Manhattan flagship located at 561 Broadway in SoHo in line with the new concept in 2017, the Spanish brand signed a deal last June with Macy’s Inc. signaling an ongoing commitment to the American market. The retailer started selling the Mango Woman collections on macys.com, in addition to establishing shops-in-shop inside three stores — the Herald Square flagship and the Roosevelt Field, Long Island and Staten Island Mall locations.

In August, it also sealed an alliance with Canada-based Hudson’s Bay to make its foray into the country.