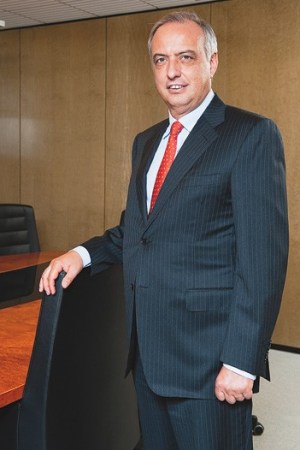 Gucci Vs. Everybody: The Changemakers Collaboration Launches

Judging by his razor-sharp reasoning and clear-cut responses, it’s not hard to imagine Massimo Saracchi applying his rigorous logic and method to streamlining Marcolin’s operations.

The chief executive officer last year led Marcolin to a doubling of both its net profit and earnings before interest, taxes, depreciation and amortization, closing 2010 as a record year.

“We want to be seen as the Atelier of Eyewear,” said the soft-spoken Saracchi, who aims to position Marcolin in the category’s highest tier.

“We must apply our best skills: excellence in developing unique design products, excellence in the quality of our manufacture and excellence in interpreting the equity of each brand in our stable,” said Saracchi, who hails from Procter & Gamble and joined Marcolin in December 2007.

In first approaching the firm, which had been slowed down by the lack of a common mission and objective, he was fully aware of its strength. He said Marcolin’s processes were too “slow and knotted-up.”

Saracchi improved efficiency, working on logistics and a new state-of-the-art, centralized manufacturing plant. He also aimed to grow profits. “There’s this myth of revenues, but it is profitability you must target.”

After three years in the red, Marcolin returned to profitability in 2009, and ended 2010 by posting the strongest set of financial results in its 50-year history. Boosted by cost-cutting and a new demand planning system, net profits more than doubled to 18.6 million euros, or $24.5 million, from 2009.

Dollar amounts are converted from the euro at average exchange rates for the year.

Rather than maximizing its revenues with extensive distribution, Marcolin is aiming at selective penetration.

“We choose the most appropriate point of sale for each brand,” said Saracchi. “We have our own offices in main markets, in particular in Europe and the U.S., while elsewhere we have distribution partners, often more than one per country, given the wide range of brands we produce.”

That said, Saracchi underscored the company’s “enormous growth potential,” as Western Europe still accounts for 50 percent of Marcolin’s sales, and less than half of that is still represented by Italy.

Saracchi’s strategy is to grow in the Far East and America, “where the economies are healthy, where the demand for luxury goods is rapidly growing and where our business is still very limited compared to its real potential.”  He said the firm is growing “very well” in the Far East and the Middle East, following the reorganization and strengthening of its commercial network. “We are also seeing great results in the U.S. and Northern Europe.”

His other cornerstone is to further develop Marcolin’s brands, “continuing to increase the growth of those that are consolidated and developing those labels that were recently introduced on the market.”

Saracchi touted the “increased visibility and improved stature” granted by the bourse. Marcolin floated 20 percent of its shares on the Milan Stock Exchange in 1999. He referred to “new and important shareholders” becoming part of the company over the past few years, which helped add solidity to the company and new licensing opportunities. Case in point: a personal investment in 2004 by brothers Diego and Andrea Della Valle, Tod’s SpA chairman and vice chairman, respectively, who took a 40.6 percent stake in the eyewear maker.

“We have strengthened our communication with the financial world and made it more continuous. The excellent performance of the company was immediately converted in an increased value of our shares, with a capitalization that has more than tripled compared with a year ago,” Saracchi remarked.

The executive said he had no plans to invest in capital expenditure, but that he is looking at increasing the number of foreign branches from the existing 12, located in diverse countries ranging from Austria and the U.K. to the U.S. and Japan. “Emerging markets are the future, so perhaps branches in Asia, the Middle East or  Russia?” he speculated.

The acquisition of “complementary companies that may help further build the company technically or geographically,” is also a future possibility, he said. Conversely, investing in retailing is not on the agenda. “It’s not part of our DNA,” he noted.

As with so many other industries, the economy slowed down eyewear from the end of 2008 until early 2010, he added, but business is “clearly picking up,” led by brisk sales in the luxury segment and strong demand from emerging markets.

“We are very pleased with last year’s record results,” he said, “but, as we believe records are made to be beaten. Our goal is to significantly improve these results.”