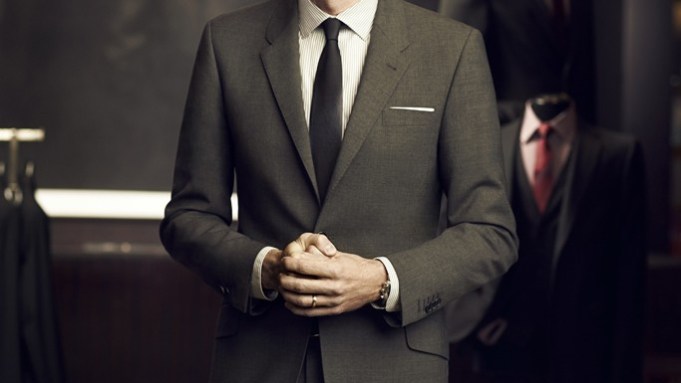 Mark Derbyshire, the president of Holt Renfrew, thinks there’s been a huge misconception about the retailer: That Canada’s only luxury chain has been on easy street, with no Barneys New York, Saks Fifth Avenue or Neiman Marcus in its backyard to contend with.

“‘Mark,’ they say. ‘You don’t have any competition.’ But I say I do. I’ve always had competition. Just look out the window,” Derbyshire said, pointing westward down Bloor Street. “You see a lot of my brands right down the street. Prada, Gucci, Chanel — they’re all out there.”

So are Louis Vuitton, Hugo Boss and Hermès. Nordstrom is on its way to Canada, too, and will open in fall 2014 in Calgary’s Chinook Centre, and subsequently in Ottawa’s Rideau Centre, the Pacific Centre in Vancouver and Sherway Gardens in Toronto. Nordstrom envisions nine full-line stores and 12 to 15 Rack outlets in Canada. There are rumors that Bloomingdale’s has been eyeing Canada, as well. “We are seeing a surge, but I don’t think it’s anything too new,” Derbyshire said.

RELATED STORY: Selfridges Keeps It All in the Family >>

During an interview at Holt’s 60 Bloor Street headquarters, Derbyshire made a simple, though often unrealized point. Those shopping Holt Renfrew, typically affluent and cosmopolitan, are also shopping Saks and Bergdorf Goodman in New York, Harrods in London, Lane Crawford in Asia, or Galeries Lafayette in Paris. The Holt Renfrew customer is international and travels frequently, Derbyshire pointed out. So Holt Renfrew feels competition, even from afar, and monitors it closely. “When Saks breaks sale, it certainly does affect our customer,” Derbyshire said. “Competition makes us good. Competition makes us better. We really have a good understanding of our markets, the subtleties of our markets and the subtleties of our customers.”

He said the evidence is in the numbers and that Holt’s been turned around since the recession. EBIT, or earnings before interest and taxes, in 2010 was double that of the previous best year. Holt had even more profit in 2011, and 2012 will be even better than last year, Derbyshire said. Volume for Holt Renfrew, which operates nine luxury stores, one outlet and a private shopping suite where personal shoppers pull merchandise from various stores for customers, is approaching $800 million. Revenues rose 21 percent through 2010 and 2011.

Holt could reach $1 billion in sales by 2015, sources said, and in the years ahead will be lifted by its three-year, $300 million expansion program, calling for a 40 percent increase in square footage through renovations and relocations, and a secondary chain launching next year, called hr2, which will sell contemporary designer merchandise. It’s believed that other new concepts are on the drawing board, as Holt embarks on an aggressive growth phase to meet the rising competition.

However, Holt officials maintain that the growth strategies, revealed in recent weeks, reflect seasons of deep analysis, learning about the strengths and weaknesses of the company, leading to the restoration of some fundamental retail best practices. A “foundation” for growth was built.

“We set a five-year strategy and really articulated what we had to do,” said Derbyshire, who joined Holt as president in January 2010 after serving as chief talent officer for the Selfridges Group Ltd., which includes Holt, Selfridges in London, Brown Thomas in Ireland and De Bijenkorf in The Netherlands. “We took a very long-term view. We looked at the store experience, the product assortments, at the brands and the pricing. We had 16 price promotions in 2009 that we cut down to six in 2010 and dropped it to four this year. We really focused on a full-price selling model.”

In addition, efforts were made to better understand the needs of each of Holt’s nine luxury stores, and refine the buy. For example, in Vancouver, a progressive city with gray, depressing weather, it was determined that color, brights, jewelry and a bit more bling, had to be showcased better to uplift the clientele, whereas in Montreal, European styling to reflect that city’s attitude and culture has been the ticket.

When the Vancouver store first opened, there was skepticism that the city was too casual for Holt Renfrew. Yet the location, said Derbyshire, is now “neck-in-neck” with the Bloor Street flagship as the chain’s top volume store. To further refine the buy, buyers and sales associates are “thinking and acting differently, working closer together,” Derbyshire said, in a shift in the culture. “Our buyers are spending more time in the shops to see the reactions of shoppers. The buyers still buy, and the sellers still sell, but if we get together as a team, focus more on the customer, we’ll buy more of what the customer wants.”

Derbyshire knew Holt had a history of focusing on products and how stores appeared but he keeps on learning. He’s talked to hundreds of employees, vendors and customers to uncover opportunities for improvement. He’s famous for showing up in the Bloor Street flagship at 6:30 a.m., for more fact-finding. “The visual team is working. There are products going onto the floor, and I look at the people in the kitchen preparing the food. I am amazed at the energy, even when we are closed.” He’s also conducted focus groups, and has made it a habit to have lunch with a customer or two every week.

He learned employees were not fully engaged, though they wanted to be, and customers liked the store but liked it best when there was a sale, or for special occasion purchases. He learned that customers increasingly wanted what’s new, and that smaller, more frequent deliveries would be beneficial. And when such deliveries don’t materialize, it becomes “a matter of visual standards and focusing on what is here and presenting it differently.” He also learned that vendors thought Holt could be a stronger partner.

“The first three years were about simplifying and getting the house in order. It was infrastructure, logistics, how to get close to the customer,” Derbyshire recalled. “We were not talking about growth. We had to build a better foundation. We needed to focus on the customer.”

It became clear things had to change, and Derbyshire and the team had to make it happen.

In September 2010, Derbyshire launched the “president’s bet” whereby sales associates received $100 if they hit their plan by the end of the year, and $500 if they hit it a month early. All non-sales employees were also eligible, if their teams or stores hit their targets, marking the first time many of them had a chance for a bonus. There were no losers. If someone missed their goal, they had to donate some time to charity.

One year, the winners went to Las Vegas. The next round of winners will go to New York, for a trip combining pleasure with business, be that a Broadway show and visits to showrooms.

Derbyshire said Holt’s sales associates have immersed themselves in product knowledge to better understand brands. They’ve traveled to the New York, Milan and Paris markets, and vendors come to Canada. There’s more of a back and forth, which Derbyshire said brings greater understanding of the products, which leads to a more authentic store experience that customers relate to. In 2009, Holt had 56 associates who were $1 million sellers. Now there are at least twice that number.

To better partner with vendors, Derbyshire said, he established a “big-bets” strategy, identifying brands that could be bigger volume contributors and could double their business with the store in the next three years. Three- and five-year plans with the brands, such as Saint Laurent, Prada, Tom Ford, Hugo Boss, Gucci and Burberry have been developed, rethinking how each is presented, where they are located, the advertising and marketing as well as the volume objectives. “Big bets” encompass certain categories, such as shoes and leather goods, while Holt also has prospects for men’s wear, particularly tailored clothes.

Holt began supporting causes near and dear to vendors. Instead of asking them to help Holt raise money, the retailer offered to help them raise money. “We flipped it,” Derbyshire said. It’s a uniform approach, whereby Holt sells 10,000 units of an exclusive, designer-made item, priced $50, covers its costs and donates the profits to the designer’s charity of choice. The items get played up on the Web site, in the stores and with designer appearances. Holt to date has raised between $500,000 and $600,000 on these cause-related campaigns.

In March, Holt will unveil a 30,000-square-foot store called hr2 in Montreal’s Quartier DIX30 shopping center. It’s geared to “fill a void in the Canadian market.” A second location is planned for Ontario early next year. The company expects to open hr2 stores across the country, probably around nine. Officials said hr2 will not carry any of the same merchandise sold at Holt Renfrew stores, though the new retail division will be stocked with lower-priced or secondary labels from many of the same designers and brands that supply Holt Renfrew with their top-priced lines. Officials are not ready yet to disclose the vendor matrix.

“Holt Renfrew has always been about style, luxury, an extraordinary shopping experience. Hr2 will be no different but will enable us to reach markets that we have not been able to serve,” Derbyshire said.

In an even bigger growth maneuver, the Holt luxury chain intends to increase its square footage by 40 percent by the end of 2015 by enlarging, renovating or relocating existing stores. All stores will be affected, though the store count will be unchanged. In the first leg of the expansion journey, Holt Renfrew in the Yorkdale Shopping Centre in Toronto will double its space to 120,000 square feet by August 2013. Derbyshire said the store, which is rather unremarkable now save for its location in one of North America’s most productive shopping malls, will be “spectacular and a real showcase for many of the world’s luxury brands,” with a grand atrium, a second floor that did not exist before and a host of new retail merchandising concepts, even one that’s kind of a throwback, a cobbler for men’s shoes. Derbyshire wouldn’t discuss details on other locations being overhauled, though executives have acknowledged the Vancouver site could be enlarged and that discussions are under way with landlords controlling the various properties that comprise the Bloor Street flagship.

Within the context of its 175-year history, “This is a very exciting time for us,” Derbyshire said. Then again, “Holt Renfrew has always been a very special place in the hearts of Canadians.

“I remember as a kid, you came here to get good clothes. We used to look in the windows and see people inside and they all looked good. There was always this energy.”