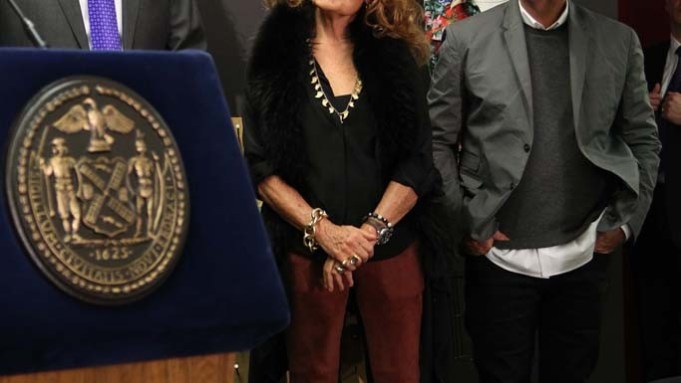 New York City mayor Bill de Blasio may be only a month into his administration, but he made it loud and clear Thursday that the fashion industry has a friend in City Hall.

Affable and at times offhandedly funny during a press conference at the CFDA’s Fashion Incubator, the mayor eased up on the jokes when discussing his commitment to building local apparel manufacturing. Speaking poignantly about how his maternal grandmother made her way in America by starting an embroidery business, de Blasio said new generations of immigrants still consider a job in fashion to be the gateway to a better life. The more than 180,000 people working in New York City’s fashion industry generate wages of nearly $11 billion a year. “That’s really money where I come from,” he said.

“The fashion industry is not just a part of our past. It is not just iconic because [of] what it once was. It’s iconic because of what it will be. And it is part of how we will build a more unified city and a city where everyone has opportunities. It is part of how we will build one New York where everyone rises together and opportunity is something that is available to all,” de Blasio said. “And that includes people who have not had as many opportunities and chances to work in this industry. We want to work closely with this industry to maximize opportunity and to make it a five-borough phenomenon.”

To that end, his deputy mayor for housing and economic development, Alicia Glen, a former Goldman Sachs executive, will serve as the mayor’s liaison to the fashion industry and will lead efforts to grow fashion in all five boroughs. “We need to recognize that for all its glamour, and yes there is glamour, the fashion industry is built on the hard work of highly skilled people, thousands and thousands of highly skilled people whose names may not be on the covers of magazines, but who make this industry so great every single day — seamstresses, patternmakers, embroiderers and many others. And that has been true for generations, and for generations this industry has provided a pathway to the middle class,” the mayor said.

Remarks like that left Diane von Furstenberg, Steven Kolb, Theory founder Andrew Rosen, Ralph Lauren’s senior vice president of manufacturing and sourcing Don Baum, Yeohlee Teng, Nanette Lepore and her husband Bob Savage smiling with encouragement. Von Furstenberg and Kolb have already lined up a meeting with de Blasio for later this month to talk strategy. And Glen and de Blasio’s wife, Chirlane McCray, “will definitely be out and about” during New York Fashion Week, according to the mayor’s front man. (The mayor’s schedule hasn’t been ironed out yet.)

While his predecessor, Michael Bloomberg, became a familiar face among designers by the end of his 12-year tenure, de Blasio appears to have wasted no time in cozying up to the fashion crowd. On inauguration day, McCray made it known that both she and their daughter, Chiara, were wearing Nanette Lepore ensembles made in the Garment Center. Referring to a meeting and factory tour he had last year with Lepore and Savage, de Blasio thanked the designer Thursday for their meeting of the minds about how to invest in local manufacturing.

Before Thursday’s Fashion Manufacturing Initiative press conference, de Blasio chatted privately with the incubator’s designers. “One of the most fascinating parts is being able to see how this town works and go behind the scenes of some of the most interesting industries in our town. This is some place that important things are happening for the future of the city. Some of the next leaders of the fashion industry, names that will become household words, are starting here,” he said.

Through the New York City Economic Development Corp., the City of New York has pledged $1 million to FMI. The CFDA, FMI chair Rosen and other partners have raised $1.3 million to date, including $500,000 from Theory and its parent company, Fast Retailing Co. Ltd., and $500,000 from Ralph Lauren. The total amount raised through the private sector is expected to exceed $2 million in the program’s first year. The first round of winners received grants ranging from $45,000 to $150,000. Additional contributors include Rue La La, Rag & Bone, Precision Custom Coatings, Alvanon, CIT, Lectra, Save the Garment District, and Project Gravitas.

“These are the first but not the last of the FMI grants that will be made,” de Blasio said. “The goal of this initiative, very straightforward, very important, is to strengthen the fashion industry in the city. This is an imperative, strategic matter for the people of New York City to support this sector. Let’s face it, if there is any sector associated with the dream of starting small and becoming big, it’s the fashion industry, so we want to support the many small fashion businesses in this town. And we want to ensure that more of what is designed in New York is also made in New York. I can think of no more powerful marketing tool than Made in New York.

“Maybe Made in Brooklyn would be even better,” kidded the Park Slope homeowner.

Jokes aside, de Blasio said fashion is a priority for his administration in that it is “one of the key areas where you can create new career pipelines from our schools to highly skilled, good-paying jobs.” He continued, “That is the name of the game, too. [We can] use our public schools, private schools and the wonderful other educational institutions in this town like FIT and create that roadway to consistent, high-skilled well-paying jobs.”

He told the crowd how his mother’s mother, his aunt and his great-grandmother came from a remote town in southern Italy, Grassano, to New York City “determined to start their own business.” They started by doing embroidery from their own homes and eventually “got so good at it that they were able to open a shop that became a thriving dress business at the corner of Fifth Avenue and 35th Street.”

Von Furstenberg said, “Oh great — you’re one of us.”

New York Embroidery Studio, owned by Michelle Feinberg, provided the embroidery for the Ralph Lauren uniforms that will be worn by American Olympic athletes at the opening ceremony in Sochi today. Feinberg said she will use some of the grant to buy laser-cutting and embroidery machines that will increase the speed of production to nearly 10 times the current rate. “I’m so pleased to be part of this opportunity to remind the world, while everybody shows up to New York with a dream, we’re not just a city of dreamers. We’re a city of doers, makers, builders and designers,” said Feinberg.

Earlier in the program, Rosen stressed how he never would have been able to start his business and be successful without New York City’s strong manufacturing base. He also mentioned how manufacturing has always been a big part of his career, one that is rooted in the business his grandfather started in 1910 selling dresses for $2.99 and $3.99. “My belief is not to save the Garment Center but invest in the Garment Center, and continue to invest in manufacturing infrastructure,” he said.

Von Furstenberg also said she started out in the factory. “It was actually in the factory where I conceived it all,” she said. “My first advice to all designers is, stay close to the factory because factories are the ones who have the most incentive for your business to succeed.”

During a roundtable FMI discussion earlier in the week, Rag & Bone cofounder Marcus Wainwright, who served on the selection committee, said that 90 percent of what will be shown on the brand’s fall runway was made in New York. Keeping as much production in the U.S. as it can has helped Rag & Bone grow to the point where it now employs 300 people in New York.

Grant recipient Kin Ming Lam, owner of the 30-year-old High Production, said he learned from Rosen years ago that locally made goods offer something that international factories just can’t: “a New York feel.”

Noting how new immigrants are struggling today to make it in New York City just as they did 100 years ago, de Blasio said they don’t have connections, but they have “the grit, the determination, the ideas and the work ethic that epitomizes why this industry has become so great and that epitomizes what people of today are doing. My grandmother’s efforts, I can honestly say, created ongoing opportunity for our family and is part of the reason I have the honor of speaking before you today.”