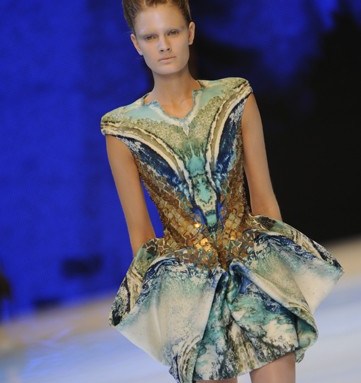 PARIS — Lee Alexander McQueen made the transition from designer label and set the “building blocks of a brand” that will allow the business to continue, despite his suicide last week.

“We believe in the future of the brand,” Robert Polet, president and chief executive officer of Gucci Group, said at PPR SA’s annual results presentation here, which opened with a stirring video tribute to the late designer’s runway legacy as one of his favorite pieces of music, Handel’s “Sarabande,” swelled.

Polet said he had a conversation with the designer “a couple of weeks ago” about progress at the London-based fashion house, and “he was very proud of what has been built. He said, ‘That means that will be my legacy. That’s something I will always leave behind.’”

And although “Lee is irreplaceable,” Gucci Group decided a continuation of the business would be the best testimony to his talent, Polet said.

He declined to comment on any succession plan, but said a fall McQueen collection would be presented during Paris Fashion Week. It will be shown by invitation in a “private salon” format on March 9 and 10 at an undisclosed location.

“Lee was very proud of the people working in the company, and so am I,” Polet added.

According to sources, the design studio includes Sarah Burton, who was McQueen’s right hand on women’s wear for more than a dozen years, and the fall collection was well under way before the designer hung himself in the wardrobe of his London apartment on Feb. 11.

Opening the annual results meeting with a tribute of his own to McQueen, PPR chairman and chief executive officer François-Henri Pinault called the designer a “pure genius” and “poet.”

The acquisition set the stage for expansion via signature boutiques in 11 cities; a secondary line, called McQ, licensed to Italy’s SINV; men’s wear and leather goods, and collaborations with the likes of Samsonite, which recently wound up, and the mass retailer Target.

Last year, McQueen also ramped up his ongoing relationship with sport lifestyle brand Puma, expanding it from footwear to apparel and accessories.

Gucci Group does not give breakdowns per brand. However, market sources estimate the McQueen business is approaching $100 million annually. At the results presentation on Thursday, PPR said strong demand from emerging markets fueled a turnaround in demand for its luxury goods in the fourth quarter, helping the retail-to-luxury group beat market expectations with a revenue drop of just 3.2 percent compared with the same period a year earlier.

“Emerging markets carried growth at the global level last year,” Pinault told analysts and journalists. “In the fourth quarter, there was a perceptible improvement in the trend in the United States, in particular, and to a lesser extent in Europe. This trend has been confirmed at the beginning of the year.”

For 2009 as a whole, the group clocked revenues from continuing operations of 16.52 billion euros, or $23.04 billion, down 4 percent year-over-year in reported terms.

Pinault remained cautious about prospects for 2010. “It is too early to talk of a recovery,” he said. “It is more of a convalescence than a recovery. We must remain cautious and wait. I think the second half of 2010 could confirm a recovery in mature economies, but at a slower pace than in Asia.”

PPR is gambling on the Asia-Pacific region to be its main driver of growth this year. Out of the 40 store openings it plans for its various brands, two out of three will be in that region, Pinault said.

The Gucci Group division, which includes brands such as Gucci, Bottega Veneta and Yves Saint Laurent, saw fourth-quarter revenues ease 0.3 percent in reported terms to 929.2 million euros, or $1.36 billion, from 931.7 million, or $1.25 billion, in the year-ago quarter. This represented a 3.1 percent increase in comparable terms.

Full-year revenues at the unit were up 0.3 percent to 3.39 billion euros, or $4.73 billion, from 3.38 billion euros, or $4.97 billion, in 2008, as the global economic downturn prompted consumers to defer purchases of costly purses, watches and clothes. Emerging markets accounted for 33 percent of Gucci Group’s revenues in 2009, up from 28 percent in 2008.

Flagship brand Gucci saw organic sales fall 1.1 percent in the fourth quarter, but comparable sales rise 2.4 percent during the period thanks to strong demand for bags including the New Jackie, Icon Bit and New Bamboo. Bottega Veneta registered a 0.7 percent increase, while Yves Saint Laurent saw a 6.9 percent drop as its wholesale business fell 24 percent against the same quarter a year earlier. YSL posted an operating loss of 10 million euros, or $13.9 million, in 2009 after breaking even the previous year.

Balenciaga saw improved profitability, registering sharp growth in Asia-Pacific and Japan. Alexander McQueen went through a “rough patch” in 2009, but was “still very close to breakeven,” Pinault said, without elaborating.

PPR last year listed a majority stake in CFAO, its African distribution business, as part of its strategy of focusing on luxury and lifestyle brands. The group plans to divest its retail assets next to fund more acquisitions, but Pinault said current market conditions meant this could take some time.

“We will take the time and we will be very pragmatic regarding our next moves,” he said. “It could take two or three years, perhaps more. In any case, it is out of the question to rush things at the risk of selling our companies at a discount rate.”