Helpsy is the first for-profit B-Corp.-certified company in the used clothing industry and largest clothing collector in the Northeast U.S. 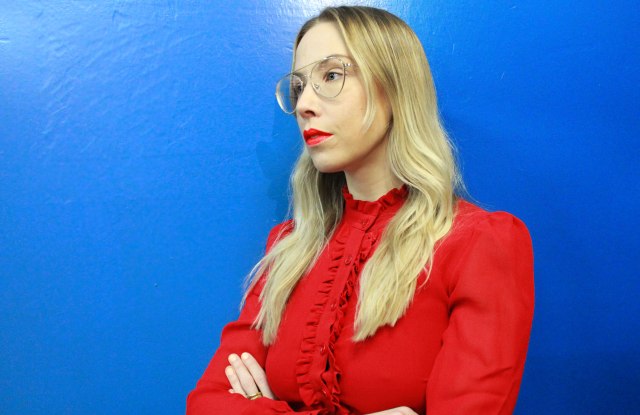 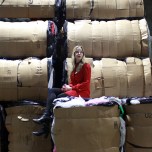 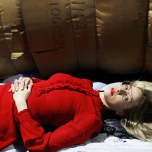 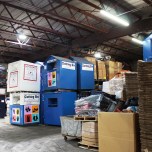 Helpsy is a modern-day “ragmen” — collecting, dealing and diverting used, sometimes unusable clothing and textile waste. Its biggest supporter is a fashion industry looking to be more sustainable, and its fiercest competitor are overflowing landfills.

This footprint includes some 1,850 collection containers, with retail integration as recently as with Bloomingdale’s, who partnered with Helpsy during “Denim Days” from March 21 to 24, collecting unwanted denim in 33 Bloomingdale’s nationwide.

Through in-store Helpsy collection bins, items are responsibly collected for reuse and downcycling. Retailers and brands can display a collection bin as a “loud call-to-action,” as Helpsy cofounder Rachel Kibbe describes it.

Kibbe’s call-to-action started with what may be considered a conventional foundation for a career in fashion, earning a degree in fashion design from Parsons. Yet she always questioned the status quo in the fashion industry and found it to be both resource and labor exploitative.

She launched Helpsy eight years ago originally as an e-commerce business stocking sustainable and ethical clothing and beauty products from independent designers from all over the world, but later curbed the mission upon a striking epiphany.

“I came to the belief that sustainability and fashion are essentially oxymorons and the world doesn’t need more clothes, they need scalable solutions for clothing trash,” Kibbe said in an interview with WWD.

When the opportunity came, Kibbe sanctioned her business assets, closed the storefront and redirected sights on a new mission, merging her brand into a new clothing collection company, together with Dan Green, Al Husted and Dave Milliner. With secured financing from Amalgamated Bank, B Corp. status and a collective vision, the Helpsy motto is simple: “Keep clothes out of the trash.”

“The magic of used clothing is that most of it is reusable as clothing,” said Kibbe, who reiterates that “Helpsy’s collection activity makes reuse, downcycling and recycling possible.”

To tackle clothing recycling, which Helpsy refers to as “recycling” rather than donating, at scale, the for-profit model is necessary, while also enabling Helpsy’s 70 employees to be paid living wages.

What clothing Helpsy collects, its customers hand sort to determine the next best use for each item. Unlike other clothing collectors, Helpsy doesn’t sort through its collections — as objectivity is lost when a “highly valued” brand logo gleams from the pile of discards.

About half of what Helpsy collects gets reoffered for sale at secondhand shops and markets in the U.S. and overseas. Item appeal is based on condition, size and attractiveness to particular consumers, with variances between preferences of New York City’s thrift shoppers versus thrift shoppers in Latin America, for example.

The other half of what Helpsy collects is used commercially. Goods are either cut and reused as wiper rags or broken down into fill for insulation, carpet padding or other alternatives. Everything can be used, so long as it is dry.

Aside from collecting, giving back and getting back is still part of the agenda. Last winter, Helpsy bought back 44,000 unwanted jackets for New York Cares’ annual coat drive and paid out more than $500,000 to charities for bin hosting, collection purchases and donations.

Linking their customers with the right resale streams, Helpsy hopes to show brands and retailers how to “get back their own stuff and create value out of it again.”

Finding scalable solutions for fashion’s trash problem, comes alongside a growing allegiance of reverse logistics companies such as not-for-profit, FabScrap, and circular solution provider for apparel and textile brands, Renewal Workshop, as well as re-commerce solutions such as California-based Yerdle.

“Used clothing demand is growing rapidly in the U.S., and sales are held back only by high transportation costs and by brands, which make poor-quality clothing that is expensive to sort and resell,” Kibbe said.

Globally, millions of people are employed in transporting, sorting, repairing and selling used clothes. Used clothing can compete effectively with fast-fashion goods, as secondhand marketplaces such as ThredUp and The Real Real have shown.

“The only competition is the landfill,” said Victor Bilcik, leaning against a stack of reused packing cardboard in the 14,000-square-foot warehouse in White Plains, N.Y.

As the general manager at Helpsy, Bilcik oversees all warehouse operations and is the direct line of communication with Helpsy employees. Standing in the warehouse, it’s hard to imagine it processes 1 million pounds of New York City’s textile waste a month.

The goal of any one of their warehouses is to be empty: get the bales in and out. These bales are called “credential” or “the cream” in Europe, by resale industry insiders.

The bales stacked high in the warehouse are the uncirculated apparel and textile items, “the cream of the crop” of used goods, which come straight from the consumer. Not having circulated through thrift shops, the highest value of used clothing and textiles is rightly — and hotly — pursued by modern-day ragwomen, such as Kibbe.

But while the credential comes directly from the consumer through recycling efforts, via collection bins, Helpsy also purchases directly from thrift stores and maintains strong working relationships with its graders.

With estimates from industry stakeholders and secondhand shops, only 10 to 20 percent of the thrift shops’ merchandise actually sells, according to Kibbe. The upsurge in overages may be due in part to consumer trends toward minimalism, sparked by Marie Kondo’s Netflix hit, “Tidying Up With Marie Kondo,” which is especially popular among younger generations.

“We are engaging all stakeholders — from the general public to the fashion industry, to towns and cities,” Kibbe reiterated.

At the state and municipal level, Helpsy hopes to help create and implement required clothing recycling, while limiting unnecessary hauling fees for waste.

Overall consumption needs to change. “We also hope, on a consumer level, people start to consider what’s in their closets as resource-intensive, recyclable objects and [they] responsibly recycle these items when they no longer want to wear them,” Kibbe said.

Bilcik said the company owners plead to go out of business, meaning their mission will have been fulfilled.