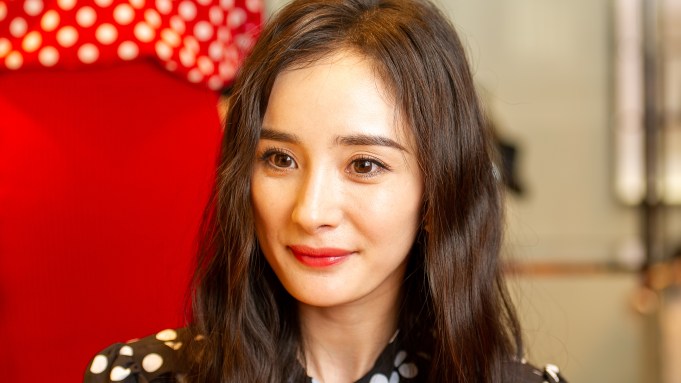 The dainty actress was wearing a black-and-white polka-dot dress, having just made her way past a long line of heaving fans, and had stepped into the atrium of the Kerry Centre here. Above her, crowds lined the railings going up three floors above where the Michael Kors pop-up shop stood. When fans caught sight of her through the silver structure, another wave of screams erupted.

“Caution,” she said, because fans on the ground floor of the mall were lurching forward and pushing at the barricades. In her hand, she clutched a red purse riveted with heart- and star-shaped studs, a new version of the Whitney purse she has designed with Michael Kors for Qixi, or Chinese Valentine’s Day, on Aug. 17.

“Qixi is one of those special holidays where the sentiment — love that endures — can be understood and celebrated wherever you are,” said Michael Kors. “And when we started to design a celebratory product, I thought who better to partner with than our ambassador Yang Mi.”

The launch event had all the hallmarks of a usual hot capsule collection. Take a popular celebrity in China — in this case, the nation’s ultimate sweetheart — tie it into a gifting holiday, and stage a brand pop-up in a luxe mall.

The usual next step would be to release a few hundred or so of the bags for sale via WeChat, as Mr. Bags did with Tod’s, and Rimowa did with Off-White.

But there were a few things different about this particular Michael Kors event.

One, the capsule — although designed by a Chinese celebrity — is global. The brand declined to reveal how many units of the Yang Mi bags it will produce, but stressed that the quantities are enough to put stock in all of its 135 Greater China stores and the international flagships in its global network, which nears 1,000 locations as of its March count.

Second, and more importantly, the bag is only one style joining the full assortment of Michael Kors products made available via a WeChat mini program, a new development for the brand and one that makes it the first luxury fashion house to comprehensively leverage the app-within-an-app’s shopping capability.

By the numbers, WeChat’s potential as a full sales platform are appealing: the mega-site drove 333.9 billion renminbi, or $50.08 billion at current exchange, in consumption over food, travel, shopping and tourism last year, according to research by the China Academy of Information and Communications Technology. During the same period, the app accounted for 34 percent of total mobile traffic in China, more than double the 14.1 percent of mobile traffic in North America.

WeChat’s payment tool has also been adopted quickly. For those under 18 years old, its usage rates have reached a saturation point, with 97.3 percent of that age group last year saying they had the function enabled. The data for over-60 was also strong, at 46.7 percent.

Tao Liang, the fashion influencer behind the blog Mr. Bags who was mingling on the night at the Michael Kors event, had already taken the plunge, in June setting up the first permanent WeChat mini-program shop that worked directly with luxury brands.

Speaking at the time, it was his view that WeChat was already a very mature and powerful way to sell luxury, citing his sales records of moving upwards of 1,000 bags in a few hours.

Kors named Yang Mi as a global ambassador last September, shortly after she was revealed as the face of an exclusive capsule collection the brand created for DFS.

With the launch of the Yang Mi bag, the brand said the mini program took some coordination between its own local web site and WeChat, setting it up so that the mini site pulled data from michaelkors.cn automatically and without the need for updating each separately.

That’s a first hurdle of executing such a program that is perhaps one reason why more brands have not done so already on a full scale, according to Elisa Harca, cofounder of Red Ant Asia, a Shanghai-based China digital marketing consultancy. A brand’s existing site provider may not also service WeChat mini programs, and thus going to another separate IT provider would result in a different system for its WeChat shop, essentially doubling the work. It could be that a brand, especially smaller brands, may lack the required ICP license to launch a web site in China.

But given all its benefits, WeChat’s existing function to link directly to brand web sites seems to fit many brands’ needs just fine.

“So long as you have a mobile-responsive web site, it may not be necessary [to do more],” Harca said. “People are still more in the vein of using WeChat to do pop-up stores because it creates hype, it creates buzz, it creates desirability.”

Harca and her team believes the main use of mini programs for luxury labels is to provide improved service and to “get closer to the Chinese audience. There are also many other functions to be developed. For example, they may offer QR codes for consumers to tell genuine products.

“So we think it will be an unconvertable trend that more brands will launch full e-commerce mini programs on WeChat,” she added.

As a brand, Kors has been at the forefront of digital experimentation within China. It was the first high-end company to launch a campaign on Douyin, the popular Chinese live-streaming service, in November. While acknowledging the DNA of Michael Kors, as an affordable luxury brand, allows it a bit more leeway to experiment, Harca also believes that this may open the gate for other luxury houses to try WeChat in a more comprehensive way.

She added, “They [Kors] are tapped into the trends and they do things quickly. From a marketing perspective, they are successful. Whether I think the creative is the best — we don’t think everything they do is that beautiful — but it is relevant. They are quick to market. They are a game changer.”

Back at the Michael Kors store, Yang was perched on a white sofa talking about the creative process for her purse design.

“I’m a fan of the big studs because it gives a leather bag a touch of contrast between soft and hard, and it represents the modern woman in life,” she said.

But when it came to how she would be spending the romantic occasion, her answer was unlikely to squash rumors of a rift in her marriage to Hong Kong actor Hawick Lau, which have circulated for some time.

“I should be working,” she said, before suggesting that people should buy the purse to give to their female friends.

The actress most likely will not be able to take time off on her birthday either this year.

“It’s been two consecutive years I’ve spent my birthday with Michael,” Yang said. “Because my birthday falls during [New York] fashion week, I’m always there with Michael on the show day.”

But she added, “Michael is such a gentleman and takes care of me so well.”