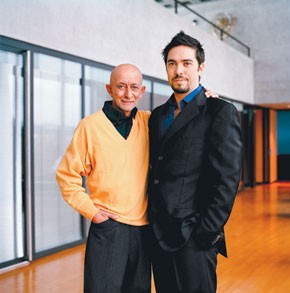 Enter Michael Wunderman, the 32-year-old son of watch veteran Severin Wunderman, who built the Gucci watch business and sold it in 1997. Wunderman now owns Corum, a luxury Swiss watch brand he acquired in 2000 that was founded by Gaston Ries and René Bannwart 52 years ago.

The elder Wunderman, 68, is a touchstone in the fine watch industry. An innovator, he has created complicated and nontraditional timepieces, such as the Golden Bridge, in which a transparent watchcase shows the tiniest movements arranged in a linear fashion, and another watch whose dial is enameled with the image of a colorful flying dragon.

“It has changed dramatically over the last decade,” Wunderman said of the industry. “A watch used to be a gift you received at your communion. You usually kept it your whole life. Now it has become a part of fashion, a part of your lifestyle.”

And now it’s Michael Wunderman’s turn. Born in Los Angeles and schooled in London, he is president of Corum. The younger Wunderman said he always has been a watch aficionado, having worked with his father from the age of 19. Being an American in a Swiss man’s world, there are some paradigms he’s looking to shift in the watch industry.

Step one is becoming the face of his brand, rather than either celebrity representation or none at all.

“Corum is changing the closed-door policy of watch companies,” he said. “[Most companies presume] it’s more prestigious to be mysterious….In today’s market, there’s sensory overload. [Clients] want to have some sort of a connection to the brand. It’s like having a fashion designer behind the clothes.”

The company’s latest advertising campaign features Wunderman and shows him either getting off a private jet with a Porsche waiting on the tarmac or enjoying the good life at a French château. The campaign’s tag line is “Unlock and conquer,” referencing the Corum logo of a key.

Seeking to tap into diverse and growing markets, Wunderman this year agreed to designate Corum as the official watch and jewelry sponsor of the World Series of Poker. The brand is making a special edition watch series for the event.

Getting Corum aligned with the green movement is also on his to-do list.

“Manufacturers need to take responsibility for their actions,” he said.

Then there’s the product.

“I’m very much involved in design,” Wunderman said. “It’s my biggest passion…getting that design idea down and finding the balance where the case has to fit well with the crown and the buckle.”

The company relaunched the Romulus watch that first bowed in 1966. It is one of the brand’s most iconic watches, with Roman numerals as markers on the bezel.

Another favorite style of Wunderman’s is the Tides watch in which the watchcase is made of titanium fused with rubber, making it shock-resistant and lightweight.

Limited edition and superluxurious timepieces are also growing categories for the company.

“It’s about having the reputation of exclusivity,” he said. “You want the product to have an air of prestige.”

With that, the brand has created three Tourbillon Billionaire watches, each of which costs $1 million and is coated in diamonds. A lower-priced version costs $400,000.

Wunderman is also consolidating wholesale distribution. The brand is sold in 1,000 doors worldwide, including Tourneau and Neiman Marcus in the U.S. By 2009, Wunderman plans to whittle that to 750.

“I want people who best understand watchmaking,” he said.