Microsoft sees its hardware partnerships as working to create a “stage” for its software, which aims to help consumers and businesses live and work better. Now the software giant has teamed with Marimekko to add some fashion flair to that stage.

The companies have brought to market this week Microsoft Surface products — skins and sleeves — that feature the designer’s signature looks. The products include a Marimekko Type Cover (for Surface Pro) in Siirtolapuutarha or Kaivo. The companies said that Siirtolapuutarha (city garden) is designed by Maija Louekari and “is a brilliant line drawing that tells a tale of a journey from a bustling city to a lush, city garden overflowing with flowers and vegetables.”

Microsoft noted that the inspiration “for the classic Kaivo (well) pattern came to designer Maija Isola in 1964, as she dropped a bucket into a well and watched ripples form on the water surface.” Also launching is a Marimekko Sleeve (for Surface Laptop and Pro) in Unikko and Räsymatto.

“Unikko (poppy) came to life in 1964 after Armi Ratia, Marimekko’s founder, announced that they would never print a flower pattern,” the company said adding that in protest, “acclaimed designer Maija Isola created an entire series of gorgeous floral prints, including Unikko.”

Maija Louekari’s Räsymatto pattern recalls the “striped rugs made by using odd scraps of fabric common in the mid-20th century,” which is still popular “today on the floors of Finnish summer cottages,” the company said.

Ralf Groene, head of industrial design at Microsoft, told WWD that the “project roots” of Marimekko “speak very much to how we think about modern design.” He described it as having an aspect of “modern timelessness” as well. “I think, on a high level, we just inspire each other by the graphic language, and I think it very fits how we bring something as abstract as computing, to people,” he explained.

Groene also noted that the launch and partnership reflects how consumers look to products as extensions of themselves.

“I think the next step for technology is to become very personal, beyond just making products out of metal, but using different substances and materials,” he said. “Such as the microfibers we have been using on our products. We worked for years on getting these to the level of performance, in terms of technical performance, to put them on products like laptops or type covers. Bringing technology closer to humans would be the ‘big umbrella’ statement.”

Groene said electronics will evolve into being more of an extension of humans, and in fact, we’re half way there already. “Think about it, with all this personal stuff that lives inside the computer: your social network, bank account, stocks, ideas, work, projects. It is a very personal device in that context. It is also very important these devices behave as objects around people, in that type of relationship. That’s how we look at taking materials and mastering them, reducing elements and bringing out these type of products.” 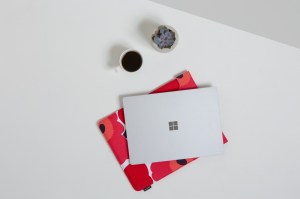 Tiina Alahuhta-Kasko, chief executive officer of Marimekko, described the brand’s design aesthetic as a “lifestyle philosophy” that is based on “empowering people to be happy as they are and bringing joy to everyday moments through bold prints and colors.”

“Marimekko’s founder Armi Ratia is known to have said that Marimekko could also equally well have taken any other form of art– it was the philosophy that mattered to her,” Alahuhta-Kasko told WWD. “Marimekko and Microsoft Surface share an inclusive and positive approach to design. Electronic devices are very much present in our everyday lives these days, so the partnership with Microsoft Surface was a natural way to bring joy to people around the world and encourage them to express their personality.”

For his part, Groene said expression of one’s personality is a broader trend worth considering. “It’s not enough to have this great product, they want to make it theirs,” he told WWD. “They want to see that this is ‘my computer’ and express that they like skateboards as well. This whole entire thing about using this PC as a billboards. It’s a phenomenon. We should be embracing it. And I don’t think that it’s foreign to who we are. I just think that the foundation of our products is building us in a deeper platform to bringing PCs or computers closer to people.”

Groene noted that collaborations are also key. “We have a partnership with Adobe, for example,” he said, adding that it’s a partnership that is “inside the product” as software. “Our products are staged for software, in the sense that we want to bring software to people,” he said. Groene also said product development process is requiring more from the creative side. And it requires context.

“It’s almost like when you design a great fashion,” he said. “You don’t just want to look at the garment, you want to look at the person. I think the purpose of these objects is to celebrate the human, and that’s very much what we do inside and outside. It’s very hard.”

Alahuhta-Kasko said that there “seemed to be a natural connection between the two brands: both represent a bold and positive design thinking and want to encourage people to express themselves freely. We have now announced three Marimekko for Microsoft Surface products with different prints to the market — a sleeve, a skin and a type cover — and we are very excited to see how people receive them and adopt them into their everyday lives.”