MILAN — “Every day, when you walk through the door to your office, you know that something as small as the flutter of a butterfly’s wing in Brazil can ultimately cause a typhoon halfway around the world,” said Gian Giacomo Ferraris, chief executive officer of Roberto Cavalli.

While quoting the Chaos Theory, Ferraris, whose successful track record includes the turnaround of Versace and who is now revamping the Cavalli brand, isn’t a pessimist — he’s merely grounded. Many of his peers share the same attitude as they face yet another round of Italian elections, scheduled for March 4, a week after the end of the Milan runway shows and in a country that is showing some signs of improved confidence — although who is likely to emerge as the winner is still anybody’s guess. Parties continue to spat and try to form coalitions since a new electoral law encourages parties to build alliances, and the specter of a second round at the polls if no majority is reached looms — including a hung parliament headed by current Prime Minister Paolo Gentiloni.

Under Gentiloni, who succeeded Matteo Renzi in December 2016, there has been progress in steadying the banking sector through state injections of as much as 17 billion euros. Italy’s public debt has stabilized at around 132 percent of gross domestic product, the euro region’s second-highest debt load after Greece.

The governor of the Bank of Italy, Ignazio Visco, this month said he expects the nation’s economy to expand this year at the same pace as 2017, since monetary policy “is working” and he forecasts Italy’s gross domestic product to grow about 1.5 percent this year. Still, Italy continues to lag many of its European peers — including France, the U.K. and Germany — which are growing faster as the Continent generally sees an economic rebound that has consumer confidence bouncing back and the euro stronger against the dollar.

Entrepreneurs are keeping an eye on the euro and the exchange rate’s volatility. “We export around 85 percent and not only in the U.S., which accounts for 33 percent of Cavalli’s sales,” said Ferraris. “China and Asia are dollar-related, so the exchange rate is a problem, but our hedging helps us face the issue.”

The company, which will hold its first coed show under the creative direction of Paul Surridge on Feb. 23, is expanding its business in Asia and China. Following the opening of three stores in Beijing last year, units in Chengdu, Macau and Harbin will be unveiled between April and July.

“Whatever the scenario after the elections, we confirm we are willing to work together and carry through the projects we have mapped out,” said Milan’s fashion and design city councilor Cristina Tajani. “I believe there has been a change of pace and that the continuity of involvement will bear fruits,” she added, referring to the recently increased cooperation between the central government’s institutions, the city of Milan and the nation’s fashion associations.

Carlo Capasa, president of the Camera della Moda, said the association works closely with the institutions and touted the achievements of the fashion industry and the production pipeline. “This is the second industry in the country, we should be proud and not be afraid to say that our fashion week, together with that of the French, are the most important in the world. We hope the elections will provide a definitive result, and that, whoever wins, will put fashion at the center, as an ambassador for positive values in the world.”

Milan Fashion Week begins today, running until Feb. 26, with 64 shows and 92 presentations for a total of 156 collections and 18 events on the calendar. Tommy Hilfiger has chosen Milan as the fourth leg of its #Tommynow show, which will be held on Feb. 25, an event that reinforces Milan’s pull, said Capasa.

This year, the Chamber of Fashion celebrates its 60th anniversary and is staging the exhibit “Italiana. Italy seen from fashion 1971-2001,” curated by Maria Luisa Frisa and Stefano Tonchi and promoted and produced by the city of Milan and the Royal Palace with the support of the Minister of Economic Development and the Italian trade agency ICE. The Yoox Net-a-porter Group is the main partner, with the collaboration of Pomellato and La Rosa mannequins. Opening today and closing on May 6, all proceeds will go toward the Chamber’s Fashion Trust. “The exhibit helps look to the future — we set up the foundations for the younger generations by telling the story of our fashion industry,” said Capasa. Speaking of history, Mila Schön and Etro this year mark six and five decades in business, respectively. 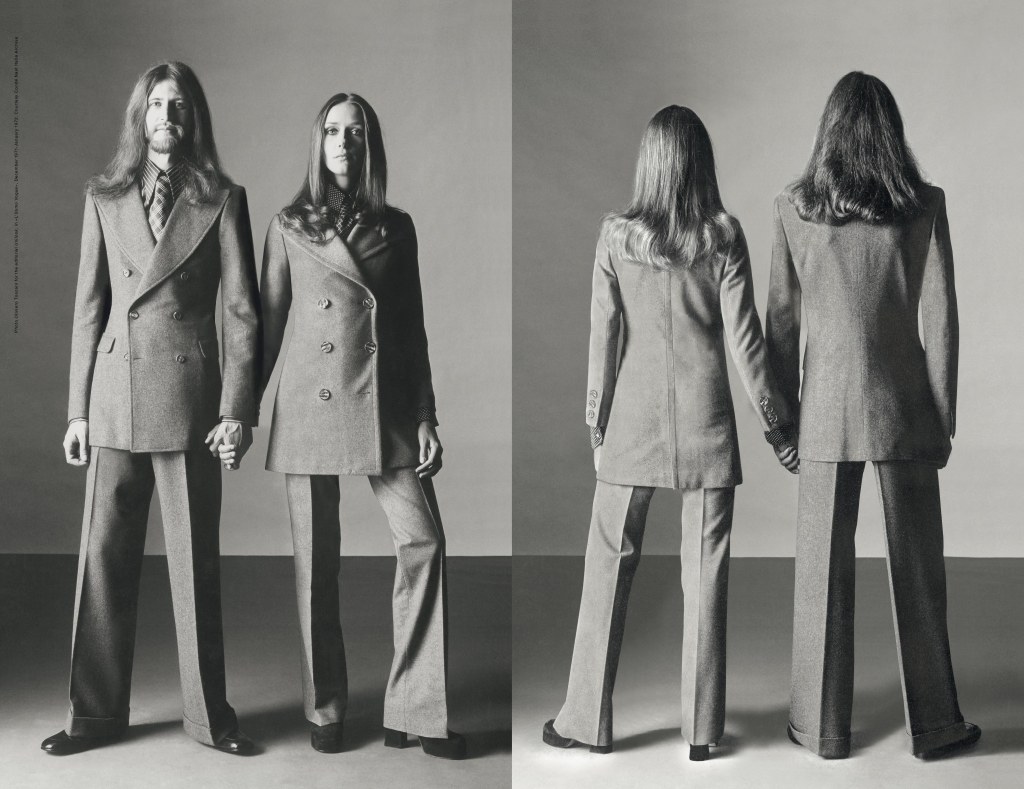 This season, there are several changes in venues and time slots. Versace, for example, will hold its show at the Royal Palace for the first time, at the stunning Sala delle Cariatidi on Friday at 8 p.m. Prada will move to the new white tower structure that completes the Fondazione Prada complex, foregoing its usual Via Fogazzaro 36 venue. The women’s fall show is scheduled for Thursday. Designed by Rem Koolhaas’ OMA architectural studio, the tower will be officially inaugurated at a later date. For the occasion, the fashion label is changing the time of the show, moving it to 8 p.m. from the usual 6 p.m. slot. This shift caused some adjustments in the fashion week schedule as Prada took Moschino’s former time. The latter will now show today at 8 p.m.

Giorgio Armani is holding his signature brand’s show on Saturday, while Emporio Armani is scheduled for Feb. 25, flipping the order around for the first time. “It will be an excellent opportunity to underscore the importance of the brand, which, following the reorganization of the group’s portfolio, has expanded its offer, maintaining intact its strong dynamic and contemporary mold,” said the designer of the Emporio label. As reported, a year ago, Armani revealed his decision to restructure his brands by ceasing the Armani Collezioni and Armani Jeans labels and rethinking the distribution of Giorgio Armani, Emporio Armani and A|X Armani Exchange.

“Milan is going through a moment of upsurge and upturn, almost a rebirth, with positive effects on all sectors,” said Armani. “I notice that the Milanese, always alert and curious, are enthusiastically supporting the initiatives that the city promotes. From my end, I have been supporting the young generations for many years and in the past I have done it by hosting the shows of emerging designers in my theater during Milan Fashion Week. This season, my support continues with a new project that I have been passionate about. In fact, I will unveil the short movie realized for the first edition of Armani/Laboratorio, an intensive cinema workshop held in the Armani/Silos space, during which nine excellent mentors flanked young selected talents to transmit the art of cinema.”

The film will be unveiled after the second Giorgio Armani show in the presence of the mentors, including, among others, Academy Award winners Gabriella Pescucci, Aldo Signoretti and Maurizio Silvi.

As designers experiment with new formats and new moments on and off-line to present their collections, many still believe runway shows are here to stay. “I believe they represent a very important moment of communication — a tool that I think continues to be irreplaceable,” said Massimo Ferretti, executive chairman of Aeffe. “While anticipating the dates of the presentations of pre-collections would improve service to clients, I believe February and September are the ideal periods for the runway collections.”

Aeffe, which is listed on the Star segment of the Italian market, controls the Alberta Ferretti brand; Philosophy di Lorenzo Serafini; Moschino, designed by Jeremy Scott, and Pollini, and produces and distributes collections for Cédric Charlier and Jeremy Scott.

“This is an excellent moment for Milan,” said Ferretti, underscoring “the strengthening of its position” and how the city allows “the right visibility” to each brand. Aeffe continued to grow in 2017, lifted by a solid performance of its apparel and accessories divisions, growth in Europe and Greater China, and despite difficulties in the U.S. The Italian fashion group reported an 11.4 percent gain in preliminary sales to 312.6 million euros in the 12 months ended Dec. 31, compared with 280.7 million euros in 2016. Reporting the numbers earlier this month, Ferretti said that, in light of a 15 percent increase in the group’s sales campaign for spring and the positive trend for the fall pre-collections, “we look to the future with renewed optimism.”

After a hiatus following the exit of creative director Massimo Giorgetti in April last year, Emilio Pucci is back on the calendar with a runway show and the collections are designed by an in-house team.

Pucci is in no hurry to hire a creative director, said ceo Mauro Grimaldi, because the “creative studio knows the codes of the house, which is fundamental for a historical maison, and combines them with a modern sensibility.”

“It was a very natural decision to return to the show format, we experimented with the presentation last season and it went well, but the show allows to present in a more complete and precise way the creative content of the house,” said Grimaldi. “The presentation was more intimate, but this is an important brand and we want to show the collection’s imaginative ideas in a stronger and more concise way. The presentation allows to take a more in-depth approach, but conveys a less strong visual perception of the message.”

Grimaldi said that presentations and runway shows are effective, but added that he believed “it is not right to choose a format forever. Alternating our communication is also important, offering a different point of view and trying different solutions.”

The executive also emphasized the “buzz” of Milan, where the company has moved its headquarters from Florence. “It’s a fantastic moment, there is a new energy, new relations between brands and we are happy to contribute to the fizz.”