A new line created by Miley Cyrus and Max Azria is due to bow in mass retailer Wal-Mart late summer. 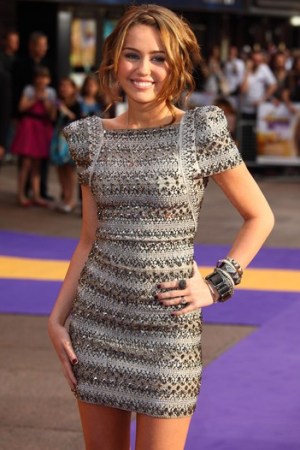 Miley and Max are heading to Wal-Mart.

Miley Cyrus, the teen sensation whose alter ego, Hannah Montana, stars in her own TV show and concerts, is teaming up with Max Azria, chairman, designer and chief executive officer of BCBG Max Azria Group, to create a junior line for Wal-Mart called Miley Cyrus and Max Azria, sources said.

The trend-right collection will bow in all Wal-Mart stores and on walmart.com in early August, the sources said, adding the line will include tops, pants, graphic T-shirts and shoes, priced under $20.

Azria is said to have developed a rapport with Cyrus in the course of dressing her for events and eventually became acquainted with her parents — her father, country star Billy Ray Cyrus, who appears on the “Hannah Montana” series, and mother, Tish.

The Miley Cyrus line is the second major teen country star Wal-Mart has linked with in the last few months. The retailer already carries a line of cami dresses by country sensation Taylor Swift under the label L.E.I. by Taylor Swift, which is exclusive to Wal-Mart. Other junior collections offered at the store include “America’s Next Top Model” T-shirts and sweatpants; No Boundaries athletic shorts and tank tops, and Op smocked jersey dresses and tube dresses. In the past, Wal-Mart has offered Mary-Kate and Ashley Olsen’s tween fashion line and Stuff by Hilary Duff.

The Wal-Mart deal marks Max Azria’s second foray into mass market territory and gives him agreements with the world’s two largest retailers — Wal-Mart and Carrefour. In 2006, Azria signed a deal to design a women’s ready-to-wear collection for the French retailer, which operates hypermarkets in France, Greece, Spain, Belgium, Italy and Portugal. The collection Tex by Max Azria launched for the fall-winter 2007 season. At the time, industry sources familiar with the arrangement said the deal, which ends Dec. 31, 2011, has a minimum guaranteed volume of 1 billion euros, or about $1.3 billion, over the course of the contract, plus escalations per season.

The BCBG Max Azria Group is a diversified organization. Its portfolio of 22 brands includes BCBGeneration, Max and Cleo and Manoukian, among others, with price points from less than $20 for Miley Cyrus and Max Azria at Wal-Mart, to $3,000 for a Hervé Léger dress at Bergdorf Goodman.

While Azria has some experience working with large retailers, industry observers said, “The difference with the line now [Miley Cyrus and Max Azria] is that this is truly a junior line” and that it will be designed with a celebrity, Cyrus. Hence, the collection will bear both their names.

Cyrus, who will be touring at the end of the year for her new album, “Breakout,” to be released July 22, will wear BCBG Max Azria styles. Her tour will reportedly be sponsored by Wal-Mart.

The latest collection continues Wal-Mart’s recent mining of popular culture as it relates to teens and has contributed to the discounter being able to consistently outpace its competition. Following the title’s release on March 21, “Twilight” set a one-day DVD sales record at Wal-Mart, which was one of several key retailers and Wal-Mart also has sold “Twilight”-themed T-shirts.