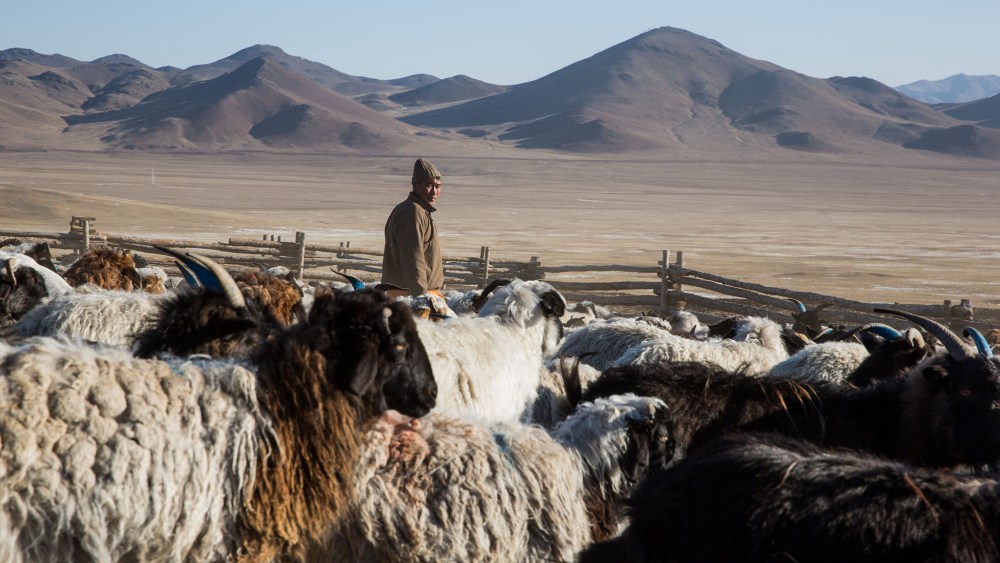 ULAANBAATAR, Mongolia — A cashmere scarf from Hermès — with its colorful dyed yarn and intricate patterning — can go for over $1,000. Shang Xia, a Chinese high-end lifestyle boutique backed by Hermès, showcases cashmere felt robes that retail at around the same price point. Yet the fiber that is painstakingly crafted into these one-of-a-kind pieces has a more humble origin — the cashmere goats of Mongolia.

With more than 25 million goats grazing on the country’s steppes, Mongolia commands the second-largest cashmere stock worldwide, accounting for about a third of the global supply. Last year, according to the Mongolia Wool and Cashmere Association, the country produced 8,500 tons of raw cashmere fiber, and it is expecting that amount to climb above 9,000 tons in 2017.

But the industry — as well as the nomadic herders who raise the goats — is at a crossroads. The rapid, exponential increase in livestock throughout the country has led to the decimation of pastures, which threatens desertification of the lands. Meanwhile, herders who are at a loss for how to gain a more viable income are hit hard by the growing frequency of harsh winter conditions, which is called a dzud — a Mongolian word referring to a weather phenomenon that can leave massive numbers of livestock dead due to heavy snowfall and ice.

Although a dzud used to sweep the country once a decade, Mongolia is currently experiencing one for the second year in a row, with temperatures dipping as low as minus 58 degrees Fahrenheit in the northern part of the country.

So far this winter, 168,000 livestock have perished, affecting more than 265,000 people in herder households, according to the Mongolia Red Cross Society. The number of dead livestock is likely to climb past 300,000 by mid-May, when the first grass sprouts on the ice-covered plains.

Nyamji Dolgosuren, 46, is one of the tens of thousands affected by this year’s dzud. Residing along the snow-covered valley of Khovsgol province, Mongolia’s northernmost region, Nyamji and her family are desperate to keep their cashmere goats alive, going so far as to allow the weaker ones to stay with them in their warm ger, a Mongolian yurt. So far, her family has lost more than 50 animals out of their 300-strong flock of sheep and goats.

“We want to keep the goats safe so that when it gets warm, we can comb out their cashmere and sell it, and then repay our debts,” she said. Her family had borrowed money to buy more hay and feed for her starving herd to get them through the harsh winter,” Nyamji explained.

The price that raw cashmere fetches can vary widely. Nyamji said that the highest amount her family has ever gotten is 60,000 tugrik, or $24, a kilogram. Manufacturers in Ulaanbaatar say that the price is higher in the eastern provinces, where the quality of the goats’ fiber is finer.

This income serves as a direct lifeline for herders, which is why there is an ever-proliferating population of goats grazing upon Mongolia’s plains. In 1990, the number of goats was about 4 million; by 2016, that had skyrocketed to about 25 million. This is problematic for maintaining the pastureland because goats eat every single part of the grass, and an unceasing population of livestock — which includes cows, horses, sheep and camels in Mongolia — will lead to less food if the pasture is not given time to regrow.

The rapid increase of cashmere goats in Mongolia is directly due to the fact that a sheer volume of goats can better a household’s life, said Ulziibodijav Jambal, founder of Bodio’s of Mongolia, a company that sources and produces cashmere garments. Bodio’s also provides dehaired cashmere — a process where the raw fiber is cleaned of its coarser properties — to brands like New York-based cashmere retailer Naadam and Canadian designer Turrath.

Ulziibodijav firmly rejects that the goat population should be controlled by dictating livestock limits to households, despite its exponential increase in the last two decades.

“Generally, if the number of all the livestock in Mongolia were to increase endlessly, then yes, that would affect the pasture and cause desertification,” Ulziibodijav said. “But the way to solve this problem is not to tell the herders what to do or what not to do because it’s their private property and it’s how they make a living.”

He explained that despite the luxury classification of cashmere in the global market, raw cashmere stock does not actually bring wealth to a typical herder household of four. “If a herder has 1,000 goats, he can get 300 kilograms of cashmere every year from it. Raw cashmere is about $30 to $35 a kilograms, which means it is about $9,000 a year,” he said, explaining that this is enough just to get by. “If a family has four people, that means that for the whole year, one person’s income is only $2,250.”

Yondonsambuu G., vice director of the Mongolian Wool and Cashmere Association, said that 40 to 60 percent of the average household income is related to cashmere, and the best way to convince herders to diversify their livestock is for the government to develop the agricultural sector and create a meat-processing industry.

“Currently, the situation is that selling cashmere is the only way to make more money,” Yondonsambuu said. “But from the government’s side, they need to work on creating a meat processing industry, so that they can export the meat….If it can work, then herders may be able to diversify and maybe we can control the number of the goats.”

However, this dream will take at least a decade to be realized, Yondonsambuu said, due to the varying standards of the meat industry.

In the meantime, the value of cashmere in the global market is decreasing due to the large supply of it, said Ulziibodijav. Twenty years ago, China — the number-one supplier worldwide — produced more than 9,000 tons of cashmere, while Mongolia made about 3,000 tons. Now the supply from China has increased to about 20,000 tons, while Mongolia is about half that amount.

“With over 30,000 tons, the supply has tripled and the price has gone down. [Cashmere] will naturally go toward the midmarket range,” Ulziibodijav said.

Erdenetuya Mangaljav, the general director of Sor Cashmere — a company whose clients include suppliers to Hermès and Shang Xia — said that Mongolia needs to focus on refining its fiber quality. She is also a recently elected parliamentarian in Ulaanbaatar, representing the capital’s northern district of Chingeltei.

“China is the number-one global producer, and their quality is also the best because they actually work on breeding the goats. Right now, the government is discussing how to not go after the numbers — we need to try to source better-quality cashmere,” Erdenetuya said, explaining that only 40 percent of cashmere from Mongolia is considered good.

To encourage herders to focus on quality and not quantity — a move that would also be better for the country’s pastures — Erdenetuya said that she and the cashmere association are working on a pricing scale.

For her part, she is focusing on producing more value-added garments. “I want to concentrate on making higher-quality yarn and clothing, not on the quantity. I am not really looking to become a mass producer,” she said. “I just want to concentrate on getting the best-quality products to the finest customers.”

Herders across Mongolia are experiencing price fluctuations when it comes to their cashmere stock, which is coupled with the fact that the country is going through an economic slowdown. In northern Khovsgol province, herders interviewed quoted prices for raw cashmere ranging from 45,000 tugrik to 80,000 tugrik a kilogram, roughly $18 to $32 a kilogram.

This reflects how unstable the household income can be, especially if a family’s fortune is reliant on something as capricious as the weather.

Batsuri Sharkhuu, 54, is currently experiencing the toughest winter of his life. Out of his herd of more than 200 goats and sheep, more than 100 have died from the dzud.

“The only chance to survive is to sell these animals but with a winter like this, it is hard to say if I’ll even have any animals left,” he said.

Batsuri explained that when the animals are hungry for food, they would use their hooves to chop at the ice and snow desperately, tiring them out and causing them to die from the severe cold. Some hungry goats would even resort to eating each other’s fur when crowded in a shelter.

Powerless against the dzud, Batsuri expresses weariness at having half his family’s livestock — in effect, his savings — wiped out by a single winter.

“I’m tired. I have a bad hip, and my wife has problems with her kidney,” he said. “After this winter, we are planning to stop being herders and move to a village instead.”