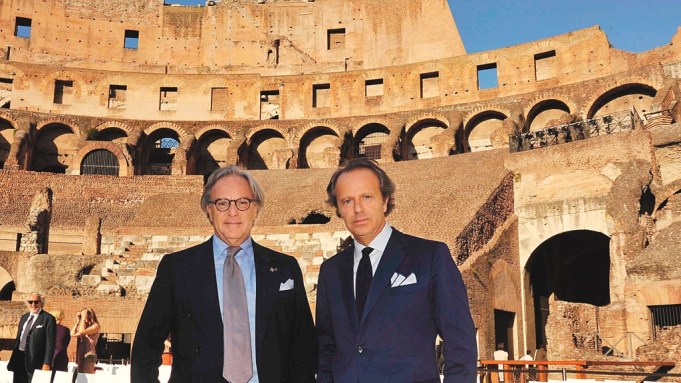 The Made in Italy campaign is successful because the nation’s reputation for making classic things that last is rooted in its icons that go back thousands of years — from works of art like Leonardo da Vinci’s “The Last Supper” to the Colosseum.

“Beauty nourishes creativity and innovation, it’s a virtuous circle,” said Armando Branchini, vice president of luxury goods association Fondazione Altagamma. “Italy’s value identity is embodied in the exceptional quality of Made in Italy. Without it, the sound of a Ferrari motor would not be so harmonic, nor would the design of its body be so exquisite.”

Italian fashion entrepreneurs have increasingly been active in contributing to safeguarding and restoring Italian monuments, especially since funds earmarked by the government for this purpose are slim, considering the country’s struggles with a difficult economy and swelling debt.

“Companies that are profitable have an obligation to support the public administration, which is generally overburdened with costs,” said Renzo Rosso, founder of OTB. Rosso is giving a makeover to Venice’s iconic Ponte di Rialto with a sponsorship contract that will see the Italian entrepreneur financing the restoration of the 16th-century bridge through his company, parent of Diesel, Marni, Maison Martin Margiela, Viktor & Rolf and Staff International. Rosso has pledged to donate 5.5 million euros, or $7.5 million at current exchange, for the bridge restoration, which will be overseen by the city’s municipality.

“It’s a must to help and give back to the territory,” he said. “We should not replace the public authority, but socially lend a hand.” The entrepreneur also sees this as a way to help boost tourism in the city.

Tod’s chairman and chief executive officer Diego Della Valle has made headlines around the world with his donation of 25 million euros, or $34.2 million, to help pay for the restoration of the Colosseum in Rome. Work started last year, two years after he signed the sponsorship contract.

Della Valle has been urging fellow entrepreneurs to take action and support work on crumbling sites throughout the country, a venture he has dubbed “Project Italia.”

“The concept of being a custodian of a small part of the world for a period in time is very strong for me,” said Brunello Cucinelli. “Living as a custodian, you feel the need to beautify, while with the concept of ownership, there is a fear of losing or changing something.”

In 2011, Cucinelli donated 1 million euros ($1.3 million) to help restore the Etruscan Arch in Perugia, in Italy’s Umbria region, 10 miles from Solomeo, home to his company’s headquarters.

Also known as the Arch of Augustus, it dates back to the 3rd century B.C. and is one of the symbols of the city, as the main gate into the north side of the historic center. But for Cucinelli, the Arch represents his youth.

“My school was nearby, as was the cinema I went to,” he mused. “And it is the most beautiful civil monument from that era. When you touch a stone that is more than 2,300 years old, it has another appeal.”

The name of the entrepreneur will not appear on the Arch. “There will only be a sentence from one of my masters, the Roman emperor Hadrian: ‘I feel responsible for the beauty of the world,’” said Cucinelli, known to pepper his conversations with quotes from philosophers and historians.

Cucinelli also has restored the medieval village of Solomeo. He bought Solomeo’s 14th-century castle and surroundings in 1985, and since then has restored the entire village, adding a theater complex in 2008 with programs of prose, music and dance, and the Aurelian Neo-humanistic Academy, which hosts seminars on philosophy, history, architecture and spirituality. Last year, Cucinelli inaugurated the Solomeo “School of Crafts,” which offers annual craftsmanship training to young apprentices, with a focus on knitwear.

“If our plant were in an anonymous industrial area, it would have a different allure. The conditions in which people work, if they feel respected, generate responsibility, and if you feel more responsible, you are more creative,” Cucinelli said. “Beauty and order influence and affect the level of creativity. I believe that if something is beautiful, it’s true and right and also useful.”

While preparing the road show for the initial public offering of his company in 2012, the executive invited investors to Solomeo to see the brand’s tradition and production firsthand.

“The territory and its culture have an immense value. Italians are especially close and attached to their territory. For me, it would be a problem if I had to move 5 kilometers away from Solomeo,” quipped Cucinelli.

The entrepreneur said there is an increased awareness of these issues now. “We were less sensitive to this 15 years ago. Today there is a new investment in values such as spirituality or religion,” he said.

In 2013, Fendi said it was supporting a four-year project to restore Rome’s fabled Trevi Fountain — captured in movies including “Three Coins in the Fountain” and Federico Fellini’s “La Dolce Vita.” The Rome-based firm will also provide for a face-lift to the Complex of the Four Fountains in the city.

“This marks a return to our origins, to reinforce the brand and strengthen its ties with the city of Rome,” said Fendi president and ceo Pietro Beccari. The company did not provide details about the cost of the restoration of the Trevi Fountain, but it is estimated to top more than 2 million euros ($2.7 million). Fendi will not advertise the sponsorship, preferring, upon completion of the refurbishment, a small plaque at the site that will signal the contribution of Fendi, Beccari said.

Next year is a milestone for the company, which will turn 90, and Fendi plans to move its headquarters to the travertine-clad Palazzo della Civiltà Italiana, which last year was the site of Giorgio Armani’s “One Night Only” event in the city.

The imposing structure, with six rows of nine arches, is also dubbed the Square Coliseum and is considered representative of fascist architecture. It was built for the 1942 World’s Fair in the city. The brand plans to offer the main floor to exhibitions and projects that exalt Italian creativity and craftsmanship.

“The Palazzo della Civiltà is a symbol of a modern building and the fountains are symbols of Rome. This is a dialogue between tradition and modernity. They are symbols of Italian excellence and of the Made in Italy label,” Beccari remarked.

The executive added that, while benefiting the city, the investments also promote the brand and its lifestyle associated with Rome and “the Italian savoir-vivre.”

Prada is also supporting its home territory. The company has earmarked 200,000 euros, or more than $274,000, to support the restoration of the fortress in the Tuscan city of Arezzo, to recover the antique church of San Donato in Cremona. Patrizio Bertelli, ceo of the Italian luxury firm, hails from Arezzo. The estimated total cost of the works is 427,000 euros, or $583,200. This month, Prada said it was also financing the restoration of Giorgio Vasari’s “Last Supper,” which was seriously damaged during the devastating Florence flood of 1966.

“We opened the Gucci Museo in the heart of Florence on Piazza Signoria in our 90th anniversary year, [aiming] to create a destination that celebrates the heritage and values of Gucci as represented by our Forever Now philosophy,” said president and ceo Patrizio di Marco. “We also wanted to connect the Museo meaningfully with the city of Florence, where the brand was born in 1921, by donating 50 percent of each visitor’s ticket to preserve and restore the city’s signature art treasures.”

Gucci has also engaged in restoring a different form of art — films. Since 2006, the company has been working in partnership with Martin Scorsese’s The Film Foundation.

“Gucci is also proud to support The Film Foundation’s efforts to save and preserve cinematic treasures,” di Marco added. “Unfortunately, many of the most important films from the last 100 years — of which a significant number are by Italian directors — have been left to deteriorate. Through the digital restoration work of Martin Scorsese’s foundation, future generations will be able to enjoy these masterpieces as they were seen when they were first released.”