Mulberry Goes for Global Pricing as It Seeks Greater Transparency

All customers will pay the same price for Mulberry products, regardless of where they buy them.

LONDON — It’s a small, and increasingly transparent world, one reason why Mulberry has decided to harmonize the prices of its leather goods for customers, whether they’re shopping online or offline in Shanghai, London or Los Angeles.

The brand began rolling out global pricing last year with the launch of its collaboration with Acne Studios, and continued in that vein with the ecoconscious M Collection that was introduced earlier this year. The new, standard pricing will be achieved by bringing international stickers in line with U.K. ones, inclusive of any local sales taxes, VAT or duties.

The rollout will begin with the leather goods categories, which account for approximately 90 percent of the brand’s revenues, with further categories to follow. Global prices for leather goods will be in place by the end of April.

The shift is facilitated by the fact that some 95 percent of Mulberry’s sales are direct-to-consumer via its omnichannel business model.

Mulberry’s chief executive officer Thierry Andretta said the company is committed to “openness and transparency” across its global distribution network, and achieving a global pricing structure had been part of the business strategy for some time.

“It makes absolute sense for us,” said Andretta, adding that the decision was not the result of the coronavirus lockdown or the fact that people will likely be flying less in the coming months. He added that harmonization had been in the works for at least six months and he had no intention of holding up the company’s plans, even during the lockdown. 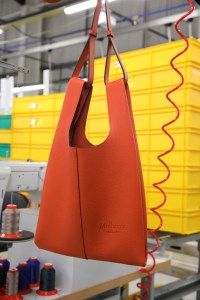 Andretta said that as the brand approaches its 50th anniversary in 2021, “we believe now, more than ever, it is important for our customers to know there will be no international price discrepancy.” He added that the company would be able to absorb any losses resulting from markets where the bags happen to cost more.

Mulberry’s move is unusual as luxury and high-end brands are often cagey with their pricing strategies, tweaking them quietly and regularly to compensate for exchange rate fluctuations, duties and travel patterns.

Traveling luxury consumers are also naturals at arbitrage, and currency fluctuations have fueled sales of luxury goods in different markets at key periods in time: After the Brexit referendum in 2016, the British pound crashed against major international currencies, bolstering tourism in the U.K. and sales of high-end items up and down Bond Street.

In an interview, Andretta said Mulberry’s move is about being relevant and appealing to future generations of customers. “The digital generation now is sometimes checking prices five times before they make a purchase,” said Andretta, adding that Mulberry’s online sales have been growing in the double-digits, year-on-year, for the past decade.

Andretta added that the initial response Mulberry received from its customers when it introduced the global pricing strategy was overwhelmingly positive. “We are a young, digitally focused, entrepreneurial brand, and we believe that global pricing will become the norm,” he said.

Global pricing is the latest step the brand has made as part of its transparency mission and longstanding pursuit of sustainability.

Since its founding in 1971, Mulberry has offered a lifetime restoration service for its bags and accessories, and has kept a dedicated team of 10 to 15 artisans on site at its Somerset factories. It hangs onto spare parts and leather stocks in order to repair bags and accessories, no matter how large or small.

Earlier this year, on the first day of London Fashion Week in February, Mulberry staged a Made to Last event in London and set up The Mulberry Exchange, a repair and swap service that will roll out internationally and online.

“No matter how old your bag is — to us, you are still our customer. We don’t even mind where you bought the products because we can authenticate them ourselves. This is something we have always done,” Andretta said at the time, adding that Mulberry wants to do business in the most responsible way possible, and that stretching the life cycle of products is “not a limiting factor” in growing the business. It’s simply part of the brand’s service offer.

So far this year, the British brand has launched a 100 percent sustainable leather tote, known as the Portobello, and M Collection, a new capsule of bags and outerwear crafted from a blend of Econyl-branded regenerated nylon and sustainable cotton.

At the time, Mulberry said it would ensure that the price for responsible sourcing and production was not passed on to the consumer. Prices for M Collection range from 115 pounds to 995 pounds.