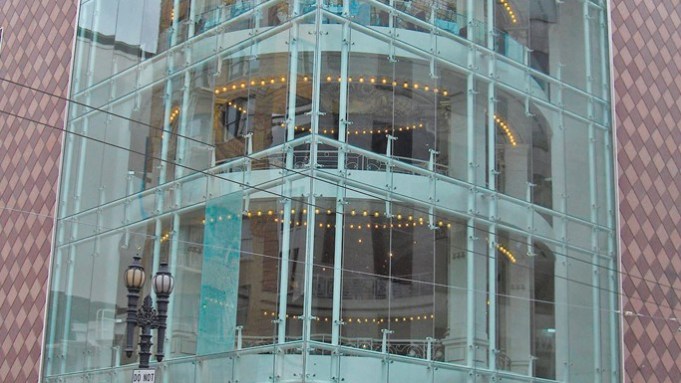 Neiman Marcus Inc. is headed back to Wall Street.

The Dallas-based luxury stalwart filed its long-awaited registration statement for an initial public offering Monday. Details are still vague, with no read on how many shares would be sold or at what price.

The filing with the Securities and Exchange Commission said up to $100 million would be raised in the offering, but that figure is surely a placeholder. The timing suggests an IPO could come as soon as September or October, assuming a bidder with very deep pockets doesn’t take a sudden interest.

There were recent rumors that private equity giant KKR wanted to buy Saks Inc. and then merge it with Neiman’s. That overture appears to have been shot down by Neiman’s owners, but anything could still happen and the filing for an IPO could bring a new sense of urgency.

“It sends a signal that they’re serious about making some move with it,” said Bob Haas, head of the private equity practice at A.T. Kearney, of the filing. “They’re probably eager to do something and the IPO is just one option available to them. A merger with Saks is probably still a possibility. If [the stock market] continues to go down and sideways, the IPO will suddenly become less likely.”

Despite a pull back in stocks over the last week — tied to fears of higher interest rates and instability in China — it’s been a good year for both retail and the broader market. According to Renaissance Capital, there have been 82 IPOs priced in the U.S. this year, a 14 percent gain.

Neiman’s, among a handful of the world’s top designer retailers, has gotten its groove back after stumbling during the recession, but it still has to sell itself to the Street.

“They’ve rebuilt the business to essentially peak prerecession health,” said one retail banker. “It’s all dressed up now. The [profit] margins are good, not great, so the challenge is, if you think you’ve already restored the margin to peak margin and there’s very little growth, well what is the investor paying for?”

The answer to that question could make or break the IPO.

The company and luxury department stores in general don’t have the obvious powerhouse growth story that made the Michael Kors Holdings Ltd. IPO so successful and valued the firm at a current $11.5 billion. And some observers have questioned Neiman’s growth trajectory given its current store base and its uncertain prospects overseas.

But Neiman’s said in the filing that its growth would come from the expansion of its omnichannel capabilities, the e-commerce business, comparable-store sales, smaller stores and proprietary merchandise.

Specifically, the company said it could double the retail footprint of the Last Call outlet concept, expanding to 70 stores over the next five years. Neiman’s also said it could “significantly increase the footprint of our Cusp stores.” And the addition of more proprietary goods, which currently represent less than 2 percent of sales, could enhance its image and its gross margin.

“Certainly there is growth,” said Arnold Aronson, managing director of retail strategies at Kurt Salmon, of luxury department stores. “Is the growth a continual double-digit as it was…probably not. But there are other ways to attain greater profitability. Certainly there’s the e-commerce business, which can be a significant growth vehicle. There are certain selected brick-and-mortar opportunities that will come up.”

Mortimer Singer, chief executive officer of Marvin Traub Associates, said Neiman’s had to do a lot of blocking and tackling through the recession, but can now focus on the future. “They can become more aggressive,” he said. “They are really just starting to capitalize on omni opportunities and there are other opportunities with outlets and private label.”

David Kuntz, debt analyst at Standard & Poor’s, said Neiman’s performance has been “relatively good for the past few years” but profit margins would be restrained as the company invests in omnichannel initiatives to knit together its online and retail operations.

“The upside is probably a little bit more limited going forward than it has been, but we think that the company, the merchandising, the operational execution continues to be good,” Kuntz said.

The luxury consumer, in the meantime, is becoming less predictable.

Retail analyst Walter Loeb said, “Neiman’s is still a major factor in retailing, but what concerns me is that the consumer is feeling conservative.”

Loeb is also concerned about the slowing European tourism to the U.S. but suggested Neiman’s could come up with a new growth vehicle. “Probably there will be something in the making that could be expanded, or an acquisition,” he said.

TPG and Warburg Pincus bought Neiman’s for $5.1 billion in 2005, putting in about $1.4 billion cash and covering the rest with debt. The pair collected a $449.3 million special dividend from the business last year and would receive the proceeds from an offering. But the investors aren’t expected to see the kind of outsized return projected when they took the retailer private in the go-go consumer days before the recession and financial crisis.

Banking sources said TPG and Warburg haven’t seen eye-to-eye on just when to try to cash out. Credit Suisse is underwriting the IPO and has been working with Neiman’s, pursuing what’s known as a dual-track process of exploring a sale of the company or an offering.

Neiman’s recently found itself with competition in the market. Saks Inc. is said to be pursuing a sale with Goldman Sachs, a process that essentially offered up a lower-priced luxe alternative chain for a would-be Neiman’s buyer.

For the year ended April 27, Neiman’s revenues gained 6.5 percent to $4.5 billion and boiled down to adjusted earnings before interest, taxes, depreciation and amortization of $623 million.

As it comes to market, Neiman’s can rely on its long track record and stellar standing in the world of luxury retailing.

The company is the entry of choice for any luxury brand maker, with a seasoned buying team that minimizes markdown risk with a tendency toward greater full-price selling and chasing inventory rather than buying it aggressively at the outset. A strong culture of service and connecting with customers helps move the merchandise.

Steve Dennis, president of Sageberry Consulting and former senior vice president of strategy and business development at Neiman’s, cited Neiman’s consistently high store productivity. “This is primarily a function of a stronger selling organization due to career salespeople, more personalized marketing efforts and a greater concentration of customers in the absolute luxury tier,” Dennis said.

The stores are uniformly sized for easier, consistent merchandising door-to-door, and focused on buying top-priced, leading designers bought in depth. It has a higher concentration of luxury than Saks and is catching up in contemporary.

In recent years, Neiman’s has shown a willingness to test new concepts and has had mixed success. At Christmas, for example, it collaborated with Target on an affordable collection of Council of Fashion Designers of America designer-created gifts. The experiment did not meet expectations.

In December, neimanmarcus.com.cn launched in China after the company invested $38 million in Glamour Sales Holdings, an Asian flash-sale site that helps Neiman’s in the project. Neiman’s later downsized its China team and decided to ship from the U.S. to China, rather than maintaining inventories there.

Neiman’s freestanding Cusp stores, selling contemporary merchandise, have not gained traction, with only six locations, but Cusp departments were recently weaved into all Neiman’s stores to attract new customers.

On other fronts, the company has boosted capital expenditures to capture greater e-commerce sales and strengthen communications with customers via “fashion insider” blogs, e-mail, the company’s Web sites and social media.

• The seasoned management, which has not seen anywhere near the level of turnover that most other retailers experience. Chief executive officer Karen Katz, a veteran of the store, has a wide range of experience from store manager to merchant to running the dot-com business, and has been pushing new avenues of growth, technology and some unconventional tactics. She’s backed up by Jim Gold, president of specialty retail, a savvy merchant who rose quickly up the ranks and was formerly ceo of Bergdorf Goodman.

• Bergdorf Goodman, which, at over $600 million in sales, stands as one of the world’s most luxurious stores. This year, Bergdorf’s has been pushing renovations, new shops and new formats, with 40 projects at its women’s and men’s stores that should further lift productivity.

Among the most important issues that would be of concern to potential investors:

• Neiman’s has little room for domestic store growth, having already planted units in most affluent communities that would support a Neiman’s store.

• Stores can tend toward a formula, with a predictable lineup of high-end designer shops.

• Designers continue to open their own shops and seek greater control of their space within multiline stores. Leased shops is a trend in the luxury arena that could cause conflicts with Neiman’s, which has a policy of not operating leased shops.

• Customers on average are older than Saks Fifth Avenue’s customers.