The Reyn Spooner shop at Rothmans is the first iteration of the TestShop concept.

NEW YORK — Ken Giddon has long been an advocate for specialty store retailers and he’s about to toss his compatriots a potential lifeline.

The president of the venerable Rothmans men’s store is partnering with trade show veteran Mike Sampson, who spent 12 years with MAGIC and Project owner UBM Fashion, on a concept designed to help retailers make money on their most valuable asset: the space in their stores.

Called TestShop, the concept is a blend between a pop-up and a concession model. The way it works is that a vendor will pay a specialty store to have access to a dedicated space where they can create their own distinct brand presence.

What they get in return is access to the retailer’s customer base as well as experiences and activations that Sampson will oversee during the course of their run.

Brands will commit to taking the space for 45 days to two months. The price they pay is determined by the size of the space and the market in which the store is located. So a 500-square-foot space at Rothmans’ flagship in the Union Square neighborhood will cost more than a 200-square-foot space in suburban Iowa.

Prices will start at around $7,500 and go up from there, they said.

“The retail model is broken,” Giddon said in an interview at his store. In the past, retailers would discover a brand, buy it and then sell it in their store. But now, most brands are using their own e-commerce sites to sell directly to consumers, competing against their brick-and-mortar customers.

“Retailers have been sitting back and watching everybody eat their lunch,” Giddon said. “They’ve become too complacent,” Sampson added.

So the two men brainstormed and came up with the TestShop idea to “bring excitement back to retail,” Giddon said. “We’re trying to disrupt the ordinary,” Sampson said. 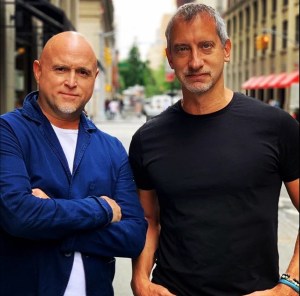 Since relocating the Rothmans flagship to 22 Park Avenue South in 2012, Giddon has offered a rotating assortment of successful pop-ups in his store to create buzz and generate sales. This was the germ that sparked the idea of TestShop.

“I’m providing the lowest customer acquisition cost for a brand and I’m probably losing 50 percent of the customers I introduce to a brand to their own web site,” he said. “I don’t want to be in that business, but if I am, I want to be compensated.”

Rothmans is the first client of TestShop, he said, pointing to a Reyn Spooner shop that has just been installed to the right of the store’s main entrance, just inside a window. A 500-square-foot space on the store’s lower level will become a Nobis shop from September through December, and an AG pop-up is also going to be installed this fall.

“Brands should look at us almost as a media buy,” Giddon said. For a fee, “we’ll sell your product, market it on social and host events for you,” Sampson added.

And if the brand is popular with customers, the retailer may add it to the permanent mix, they said.

Giddon believes this concept is preferable — and cheaper — for a brand than opening its own pop-up, which requires the payment of rent, a security deposit, staff, point-of-sale systems, etc.

Giddon acknowledged that TestShop is “not that different from a concession model” that is popular in Europe, “but we’re going to make it exciting because Mike understands activations.”

Sampson, who left UBM one-and-a-half years ago, partnered with Zappos in Las Vegas in February to launch Commotion, a direct-to-consumer show that ran in downtown during Project and MAGIC. It offered music, food, experiences such as customization stations, and booths at which brands were able to sell to attendees.

The partners have started talking to other specialty retailers to gauge their interest in the project, and have found many are receptive to the idea — especially stores with larger footprints where not all the space is productive. If they can line up five or 10 good stores around the country, they can also sell them as a package to a brand, they said.

Retailers will be able to choose from among a variety of brands depending upon their interest. This can include sustainability, travel, tech, ath-leisure, soft tailoring, etc., they said. Brands which may not be large enough to fill 500 feet alone can be paired with others with a similar aesthetic, they said, pointing to grooming products or jewelry brands as examples.

“This is a concession model for specialty stores,” Giddon said. “It will bring them vendors they haven’t had before, and Mike will create brand experiences and activations that will be better than what they can do themselves.”