Newsmaker of the Year: Bernard Arnault

France’s richest man solidified his claim to fame this year as one of the fashion world’s boldest and most formidable power players. 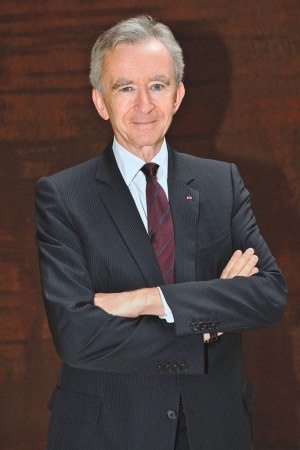 France’s richest man, Bernard Arnault, solidified his claim to fame this year as one of the fashion world’s boldest and most formidable power players.

He was behind the year’s biggest luxury acquisition — snapping up the storied Roman jeweler Bulgari — along with a less popular, yet equally intriguing investment, upping his stake in floundering French retailer Carrefour. The controversy continued as he amassed a significant stake in luxury house Hermès.

Along the way, he also met with President Barack Obama at the White House, started reshuffling the management deck at the world’s largest luxury group, and took a hands-on approach to one of the biggest design successions he’s faced yet: finding someone to fill the giant shoes of Dior’s longtime couturier, John Galliano.

The chairman and chief executive officer at LVMH Moët Hennessy Louis Vuitton found time to personally assist in recruiting a master perfumer for Vuitton, and relaunch yet another storied 19th-century trunk maker, planting a sumptuous boutique for Moynat Malletier on the Rue Saint Honoré.

All this occurred against a backdrop of global economic unease, which did not impede the advance of the world’s largest luxury group: a constellation of more than 60 brands across fashion and leather goods, perfume and cosmetics, watches and jewelry, retail and wines and spirits.

Arnault’s long-term gamble on luxury goods continues to pay off handsomely, and he managed to pilot LVMH to greater heights this year. Sales in the third quarter advanced 17.6 percent to 6.01 billion euros, or $8.51 billion at average exchange rates, confirming the group’s “confidence for the remainder of 2011.” Dior, too, sprinted ahead at the same robust pace in the quarter, with sales reaching 260 million euros, or $368 million, suggesting the turmoil around Galliano — ousted in the wake of drunken outbursts at a Paris cafe — and the succession question had scant impact on the momentum of a powerful global brand. Indeed, Dior trumpeted that sales in its own boutiques rose 27 percent at constant exchange rates in the first nine months of the year, reflecting strength across ready-to-wear, leather goods and watches.

Arnault kept a low media profile throughout 2011, making few declarations on the Galliano affair, which is said to have hurt him deeply, given his long and generous support of an acclaimed yet incendiary talent. (The British designer was found guilty of uttering racist and anti-Semitic insults, but got off relatively lightly, sentenced to suspended fines totaling 6,000 euros ($8,000), plus symbolic damages and costs.)

Questioned at Dior’s annual shareholders meeting in April about finding a new couturier, Arnault said he would only make a decision when “conviction” arrives, and that the studio would soldier on in the interim, creating the house’s collections.

“They are effective, creative and accustomed to doing so,” he assured.

Admired — and feared — for his broad-screen business vision and decisive nature, Arnault in 2011 also began to bear the fruit of strategic moves made some time ago. Chief among them was tapping former Chloé designer Phoebe Philo to take up the design reins at Celine in 2008. She rapidly transformed Celine into one of the hottest fashion brands on the market, prized for its sleek tailoring and luxurious leather goods.

“Day in, day out, we focus on high-quality products. The financial performance is the logical outcome,” Arnault said at a news conference in February to discuss 2010 results.

And then there’s Dior, perhaps Arnault’s most treasured property. The executive was conspicuously absent on March 4 when Dior staged its fall collection, a sober affair given Galliano’s ouster the week prior. But Arnault was indeed otherwise occupied — in Italy supervising round-the-clock negotiations to bring Bulgari into the LVMH fold.

The transaction, with a total value of more than $6 billion, surprised the market, doubling the size of LVMH’s watch and jewelry division in one fell swoop and making the Bulgari family the second-largest family shareholders in LVMH after Arnault himself, with a 3.3 percent stake.

The megadeal — one of the largest in LVMH history — also deflected media attention from the Galliano scandal, and from the war of words with another family-owned company, Hermès, in which Arnault and LVMH had quietly amassed a significant chunk.

Nonetheless, Hermès accuses LVMH of a creeping takeover, and a French court cleared the way for Hermès to group family-owned shares into a nonlisted holding company by year-end.

That may freeze LVMH’s stake at 21.4 percent, but few observers question the wisdom of Arnault’s investment. Sources estimate he has realized a capital gain in excess of 2 billion euros, or $2.68 billion at current exchange.

Arnault also continued to build his stake in Carrefour SA, which has faced an uphill climb convincing investors of its turnaround potential. Blue Capital, the investment fund owned by Groupe Arnault and Colony Capital, now controls 16.02 percent of the share capital and 22.03 percent of the voting rights.

Meanwhile, Arnault started reshaping executive ranks at LVMH, tapping Danone SA executive Jordi Constans to succeed Vuitton’s Yves Carcelle effective at the end of 2012; and naming Christopher de Lapuente from Procter & Gamble to become global president and chief executive officer of Sephora. More moves are in the works: According to sources, Michael Burke, ceo of Fendi, is being shifted over to head Bulgari, while Pietro Beccari, executive vice president of marketing and communications at Louis Vuitton, will succeed Burke at Fendi.

All this activity did not go unnoticed. Arnault was named a Grand Officer of the Legion of Honor on July 14, Bastille Day, while in Washington, he received the Corporate Citizenship award from the Woodrow Wilson International Center for Scholars.

In his acceptance speech, Arnault stressed LVMH’s dedication to a “moral code that is nonnegotiable, even if this sometimes means taking very difficult and public decisions because they are simply the right thing to do, whatever the impact on our business,” an apparent reference to the firing of Galliano. “To receive this award tonight in your presence is not only an honor, but also a very happy, powerful and poignant occasion for me.”