Newsmaker of the Year: Ron Johnson

The J.C. Penney chief has established himself as a retail iconoclast, willing to rewrite the rules of the game in his high stakes reinvention. 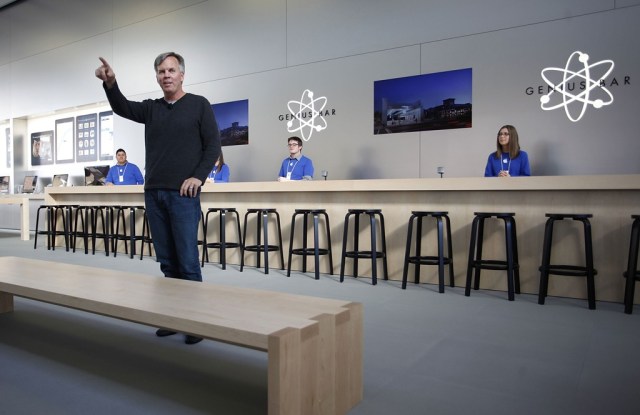 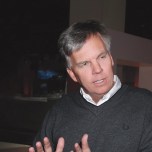 It’s Christmastime, sales are down, retail analysts are second-guessing the strategy, and Ron Johnson, the casually clad, visionary chairman and chief executive officer of J.C. Penney Co. Inc., is keeping his cool.

“I don’t feel any pressure externally or from any investors. I am really focused on rebuilding J.C. Penney,” Johnson told WWD. “We are not feeling any pressure other than doing the right thing for J.C. Penney.”

And more than most retailers, he’s looking forward to 2013 when “the fun begins,” as many more products, brands and shops emerge on the selling floors.

“This has been a very hard year. As hard as this year was, next year will be exhilarating, as we return to growth,” Johnson said. “Clearly this year we depromoted. We lowered our base. Now we see what the customer shopping patterns are. We know how to compete off a new base line. We expect a return to growth next year.

“Levi’s is wonderful. Izod is wonderful. It’s pretty remarkable that in a few short months, you can see such profound changes,” he said of the retailer’s new shop-in-shops. “But we really haven’t begun to update the assortments. That’s what happens next year. Next year will be real fun. Next year is when you will really be seeing the transformation.”

As far as being named WWD Newsmaker of the Year, it hasn’t quite sunk in. “I’m not sure if that’s a good thing or a bad thing,” Johnson said, responding to the news.

It’s a good thing. Johnson has established himself as a retail iconoclast, willing to rewrite the rules of the game in his high-stakes reinvention of the 110-year-old Penney’s. In terms of speed and scope, he’s leading a retail overhaul of unprecedented proportions — resculpting Penney’s prosaic selling floors into a “specialty department store” with ultimately 100 individual specialty shops within the box, adding better brands to modernize the mix while tossing out the dogs, and developing a cleaner, easier-to-navigate layout with coffee stops, gelato stands and high-tech advancements for service. He’s also introduced a controversial everyday low “fair and square” pricing scheme that eliminated coupons and the high-low price promoting Penney’s was addicted to, though clearances are still staged.

Johnson was already in the spotlight before joining Penney’s as the architect of Apple’s successful store rollout. He’s been taking lessons from the Apple playbook in the Penney’s rebuild, and he maintains that Silicon Valley laid-back image, forgoing suits in favor of crewnecks even at heavy-duty investor presentations. Similarities between what Apple has and what Penney’s strives for — a clean, service-oriented and nonpromotional retail environment — are apparent.

The long lumbering Penney’s had no other choice than to remake itself for a better future. The company was seeing a sales slowdown and decline in product quality before Johnson joined in 2011, and this year has endured further declines. In the third quarter ended Oct. 27, there was a $123 million loss, compared with $143 million in the year-ago quarter, and sales dropped 26.6 percent to $2.93 billion from $4 billion last year. Even Internet sales were down, declining 37.3 percent to $214 million. Penney’s stock has nose-dived from a high of $43.18 in February to a low of $15.69 in November, and closed at $18.16 on Friday.

There also have been a few setbacks on the management and marketing fronts, with the sudden departure of Penney’s president Michael Francis, a short-lived advertising campaign with Ellen Degeneres and a pricing plan that originally confused customers but has since been simplified, though some shoppers who loved their coupons defected to other stores. Johnson won’t restore coupons, but is open to staging an occasional promotion as evidenced by Penney’s Black Friday sale, officially the store’s only sale of the year, and holiday buttons that can be redeemed for a chance to win gifts are being distributed through Christmas Eve.

Meanwhile, Penney’s is working harder to communicate to consumers its fair-and-square pricing by making it easier for them to do comparisons when they shop. Penney’s estimates that $500 million in sales was lost because of not showcasing comparison values. On certain brands, such as Izod, Penney’s is showing suggested and retail prices, which is the retailer’s fair-and-square model. The company will continue with the suggested price format with its national brands going forward. When brands have sale events at other retailers, Penney’s will honor those temporary reductions so it can remain price competitive.

Smelling blood, rival retailers have been pounding away at Penney’s market share by becoming more promotional and as coupon-crazed as ever. “We knew this year sales would go backwards as we established, if you will, a high-integrity pricing model,” Johnson said. “It’s been a little tougher than anticipated, but now we are three weeks to the finish,” of year one, in Penney’s four-year reinvention.

At the end of the process, Johnson will either be the hero for boldly reinvigorating and rethinking the $15 billion Penney’s business, or the goat who brought it down.

“The transformation is on track,” Johnson said, in providing a progress report on the business. Johnson added that 10 percent of the square footage has so far been reinvented with new shops, including Levi’s, Izod, Liz Claiborne and the jcp and Arizona private brands, and that reinvented space is outperforming the old space. It’s like a tale of two stores, or as Johnson put it, like a restaurant under renovation. Imagine Penney’s as a restaurant with 100 tables, he said, where 10 new tables have been brought in, but there’s been no change in the menu as of yet. “Next year we update the menu and get to 40 tables. We will have 40 percent [of the store space reinvented] as we move through next year. That is a big difference,” Johnson said.

The most anticipated addition is Joe Fresh, which in March rolls out inside 683 Penney stores with shops-in-shop from 1,000 to 2,500 square feet each, giving Joe Fresh a huge U.S. footprint practically overnight.

An even bigger change involves renovating the home floor, which will be transformed at Penney’s larger locations, with 15,000-square-foot settings for updated merchandise from Jonathan Adler and Michael Graves, among other labels more apt to be seen in SoHo rather than a Middle American department store.

Shops-in-shop for Martha Stewart, Carter’s, Cosmopolitan intimate apparel and Giggle baby clothes and gifts will also start rolling out next year. Stewart will be selling both Penney’s and Macy’s next year, though there is ongoing litigation involving the distribution to the two stores. Johnson regards Martha Stewart and other incoming big brands as magnets for more labels and customers. “It’s the collection of partners that will change people’s perception of jcp, just like the iPod changed the perception of Apple.”

There could be additional announcements on brands, though Johnson wouldn’t cite any possibilities. “We are open to everything. We want to be exciting. We don’t want to be limited. We look at ourselves as kind of like the next shopping mall, a land of specialty shops. Just like a mall, we want to bring the best ideas to the customers.”

Next year will also see the appearance of The Street, a half-mile-long re-created main aisle through the store where customers can relax, check their e-mails, sip coffee or juice and order via mobile checkout. The Street will also have the “jcp bar” for returns, cash checkouts and pickups from online orders. It becomes the “interface” for customers to visit Penney’s new shops, Johnson said.

Another Johnson creation geared for Penney’s stores to be opened in the future is called The Square, which he’s described in the past as “a dynamic seasonal space with unique items, light food and beverage and engaging experiences” including holiday trim-a-tree areas that for the January-February period would switch to activewear, juices and Pilates and yoga classes. Every two months the focus in The Square will change, Johnson said.

In fall 2013, Penney’s will unveil a prototype 130,000-square-foot store that will “feel like a shopping mall,” Johnson said. While it seems most of the focus has been on brick-and-mortar reinvention, with digital shopping, “stay tuned,” Johnson said. “We have rolled out the ability to check out via mobile. All stores have iPads. That’s been very successful.” Effective Feb. 1, “every employee will have an iPad. There are unlimited ways it can be used,” though no capabilities have been announced yet beyond the checkout.

Also on the tech front, Penney’s is rolling out an Oracle platform over the next three years with 60 percent fewer applications than the current one, a new digital platform for the online store; for spring, Penney’s expects to be fully RFID, and the store will go paperless, except for signs.

In New York, Penney’s has moved into space in SoHo, on Lafayette and Broome Streets, where it’s recruiting talent, most likely on the creative and design sides, though Johnson declined to specify. Penney’s has its headquarters in Plano, Tex., as well as a sourcing center in Hong Kong and financial operations in Salt Lake City.

Such projects as launching Joe Fresh chainwide in nearly 700 stores within a week or two seem herculean. “It’s hard. Not herculean,” Johnson said. “Joe Fresh is the big first new partner. We can’t wait to launch that. We have built a great team and most of the great people I have met love to take on the big tasks. I loved Apple during the growth. When it becomes easy to do things, that’s when it’s time to do something different.”