People’s Choice for Newsmaker of the Year: Emanuel Chirico

The top 10 vote-getters as selected by visitors to wwd.com. 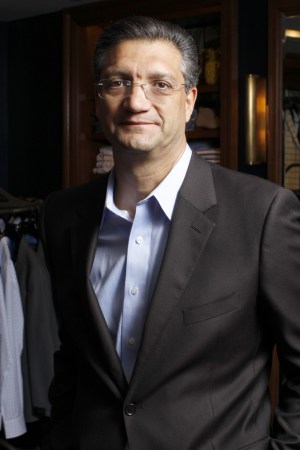 Thinking About Launching a Fashion Business? Now’s a Good Time

Farm to Fashion: When Cotton Gets Conscious, Tackling Transparency

If the designation were “CEO of the Year,” Emanuel Chirico of PVH Inc. could well have garnered top honors for the big moves he orchestrated and the way the brands in his company’s portfolio have flourished. Chirico is the winner of the People’s Choice for Newsmaker of the Year, garnering the most votes from WWD.com readers among a list culled by WWD editors of 20 nominees. Here, the top 10 vote-getters as selected by visitors to the Web site.

1. Emanuel Chirico, chairman and chief executive officer, PVH Corp.
Hurricane Sandy had brought virtually all other activity in New York to a standstill, but it couldn’t stop Emanuel Chirico from closing his third megadeal as either chief financial officer or, since 2006, chief executive officer of PVH Corp. In a long anticipated transaction, the ceo reached an agreement to acquire Warnaco Group Inc. for $2.9 billion on Oct. 30. Having skillfully worked down debt and enhanced operating performance after the 2002 acquisition of Calvin Klein Inc. for $430 million and the 2010 purchase of Tommy Hilfiger for $3 billion, Chirico, this year’s People’s Choice winner as selected by visitors to WWD.com for Newsmaker of the Year, managed not only to bring Warnaco’s jeans and underwear businesses under direct PVH control, but pick up the rights to Speedo and expand corporate assets in underpenetrated markets such as Asia and Latin America, as well. Originally considered a “numbers guy,” he’s proven to also be a savvy marketer who’s bringing the company’s heritage brands — including Izod, Van Heusen and Arrow — back to profitability with fresh merchandise and attention-getting advertising and promotion. Set to cross the $8 billion mark with the integration of Warnaco, few question the seriousness of Chirico’s intention to overtake the nearly $11 billion VF Corp. as the largest U.S.-based apparel company through organic growth and, naturally, acquisition.

2. Jeff Bezos, chairman, president and chief executive officer, Amazon.com Inc.
Amazon is on the cusp of expanding its fashion reach in a major way, which means the e-tail giant Jeff Bezos founded in 1994 might soon exceed the 37 percent of domestic mobile commerce it already commands. In October, Amazon said it leased a 40,000-square-foot space in Brooklyn’s Williamsburg section, serving as a photography studio for Amazon Fashion, which also owns Shopbop and MyHabit, and opening next spring. The Web site, currently the leader for market share and innovation among its peers, contends that fashion is its most rapidly growing business. In the third quarter ended Sept. 30, Amazon posted a net loss of $274 million versus a year-ago profit of $63 million, as the company continued to invest heavily in infrastructure like warehouses. Net sales for the quarter totaled $13.81 billion versus $10.88 billion a year ago.

3. Richard Perry, chairman, Barneys New York
Richard Perry, the hedge-fund superstar, art collector and one of New York City’s wealthiest men, put Barneys New York on better footing after his Perry Capital fund took a majority stake in the luxury chain. The deal wiped out virtually all of Barneys’ debt, in exchange for equity. Perry, who happens to be a Barneys shopper, took a seat on the board, wants Barneys to be more profitable and busier, and more of a social hub, beyond the always-crowded Fred’s restaurant inside the store. So far, he’s kept a low profile and the Barneys team front and center, but he’s said to be backing renovations and new merchandising and marketing concepts, and closely examining retail locations, some of which have long been slow. Barneys in NorthPark Center in Dallas, a big beautiful store with a limited clientele, is set to close next April.

4. Nicolas Ghesquière, designer
Trying to figure out Nicolas Ghesquière’s next step has become the party game of the season, after the acclaimed French designer parted ways with Balenciaga following a creatively charged 15-year tenure. Whether he decides to launch a signature brand or takes the helm of another fashion house, Ghesquière remains one of a handful of designers capable of producing both high-brow conceptual clothes and spawning a thousand high-street imitations. His spring 2013 collection, which proved to be his swan song, was widely praised by retailers and editors for its fresh and youthful tailoring, modern frills and square-heeled shoes.

5. Raf Simons, artistic director of women’s haute couture, ready-to-wear and accessories collections, Christian Dior
It’s been a roller-coaster year for Raf Simons, who went from a tearful farewell after seven years as creative director at Jil Sander to being crowned Dior’s sixth couturier. The Belgian designer has come a long way since bursting onto the scene as a maker of edgy men’s wear infused with youthful angst. Though his debut at Dior during the July couture did not skimp on spectacle, with decor featuring a million fresh flowers and a star-studded front row, Simons proved his minimal aesthetic was intact, showing sleek clothes that promise to steer the august house in a more modernist direction. And his spring rtw show was critically acclaimed for its futuristic takes on Dior’s iconic “bar” jacket and flower shapes.

6. Tory Burch, chief executive officer, Tory Burch
With 82 stores worldwide, 35 more in the pipeline for 2013, a solid wholesale business and two consecutive runway hits under her belt, Tory Burch has become one of the most-talked about American designers. Her Reva ballet flats and handbags continue to lure fans to her stores, and the business community likes to speculate about an IPO, though the designer has denied this. Burch is also embroiled in a nasty legal battle with ex-husband Christopher Burch, who cofounded the company with her. He sued her in October, claiming she blocked him from selling his stake in the firm. She countered with a suit alleging he used his role at the company to source and develop “copycat” products and store furnishings for his C. Wonder retail brand. Most recently, she accused him of withholding documents pertinent to the case.

7. Karl Lagerfeld, designer, Chanel
Though his design duties at Chanel and Fendi kept him plenty busy, Karl Lagerfeld also found time to relaunch his signature brand, owned by London-based Apax Partners. Besides a masstige line, the Karl collection, and premium Karl Lagerfeld Paris ranges under license with Italy’s Ittierre SpA, he is also overseeing licenses for watches and perfume, with plans for a concept store in Paris set to open in 2013. All that on top of touring the world to promote Chanel’s “The Little Black Jacket” photo book and exhibition, and side projects as varied as designing VIP helicopters to a collection of color cosmetics for Shu Uemura.

8. Michael Kors, honorary chairman, chief creative officer and director, Michael Kors Holdings Ltd.
As the song goes, “It was a very good year” for Michael Kors. After 30 years of designing and a high-profile gig as a judge on “Project Runway,” Kors’ $1.7 billion company went public last December in one of the largest IPOs for a U.S. fashion firm. The stock, which began trading at $20 a share, closed Friday at $51.60. Kors’ total proceeds from the IPO and follow-up offerings was over $467 million. As of September, Kors held 8,356,016 shares of stock, which would value his investment at $421 million and put him on the path to becoming a billionaire. Total revenue growth for the second quarter was attributed to a mix of accessories, footwear, watches, jewelry and eyewear, which combined for 79 percent of the firm’s product assortment.

9. Hedi Slimane, creative director, Saint Laurent Paris
Fashion industry fascination went into overdrive when Hedi Slimane was named creative director of Yves Saint Laurent, after focusing on photography for seven years. Known for his precise, almost-obsessive attention to detail, Slimane raised media hackles with a restrictive invitation policy that excluded some editors or relegated them to standing in what was regarded as one of the hottest tickets of the season. The collection included reverential smokings, wide-brimmed hats and bohemian dresses. It was widely praised by retailers, with mixed reviews from critics.

10. Ron Johnson, chief executive officer, J.C. Penney Co. Inc.
The choice of WWD’s editors as Newsmaker of the Year, Ron Johnson was a natural nominee, given the focus on his plans for transforming J.C. Penney Co. Inc. and its future positioning on the retail map. He brought out a slew of retail catch phrases toward achieving his goal: genius bar, shops-in-shop, a store viewed as a house and aisles thought of as streets. The very idea of turning the department store model upside down is revolutionary, evolutionary and controversial, and the whole market is watching. Forty new shops in March are on the way, and there’s likely more growing pains ahead that will keep Johnson and Penney’s in the news for some time.